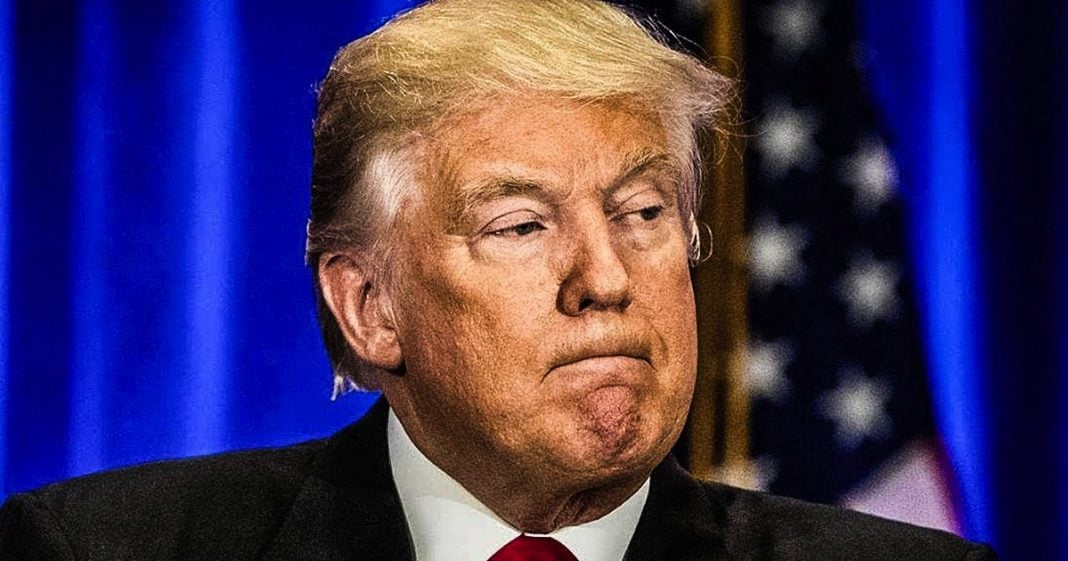 According to new reports, Republicans aren’t exactly confident that Trump will weather the investigative storm surrounding his presidency, and even if he does, they aren’t willing to say that he’s going to be the Republican Party’s nominee for President in 2020. We’re only 7 months into Trump’s presidency, and so far things just keep getting worse, so a Trump-less 2020 is a very real possibility. Ring of Fire’s Farron Cousins discusses this.

According to some Republicans on Capitol Hill, Donald Trump might not actually be the Republican nominee in the 2020 Presidential election. Now, there are several factors here. Some Republicans think that, possibly, this Bob Muller special prosecutor investigation might actually take Donald Trump out of office, and prevent him from running a campaign in 2020. But, I think the real reason Republicans do not wanna go ahead and admit that Trump will be their nominee, experience as Senator Susan Collins recently kind of waffled on, is the fact the Republicans, the hard core, the old school establishment Republicans, are hoping to primary Donald Trump in 2020. In fact, recent polling actually suggests that John Kasich actually tests better in polls, compare to Donald Trump, for the potential Republican primary.

Now, Kasich, again, I’ve said this about Mike Pence, and I’ll say it about every Republican, to go ahead and scoop ’em all into one big lump, here. There’s no difference in policy, okay? That has never been the question. The same horrible policies we’ve seen Donald Trump pursue are the same horrible policies we’d get from Mike Pence, or John Kasich, or Ted Cruz, or Marco Rubio, or Paul Ryan. They are all one and the same, and they’re all operating off of the same playbook. The only thing we might possibly hope for is having somebody slightly more rational with their finger on that nuclear button. That is the only difference, at this moment, and perhaps we get somebody who understands that you can’t go around the planet making a jackass of yourself, when you’re the sitting president of the United States. That’s about the only difference we would get, folks. We saw eight years of George W. Bush, fur years of his father, and eight years of Ronald Regan. It’s the same failed policies, every single time.

So, don’t get too excited when you see the Republicans won’t commit to Donald Trump being their 2020 nominee, because it doesn’t mean that they’re gonna switch policies, or they’re gonna switch paths. They’re just gonna repackage it in a better wrapper, in this specific instance, most likely John Kasich, but possibly Mike Pence, or even Nikki Haley. They’re gonna try to make their horrible ideas more attractive to the American public. They don’t think that Donald Trump and his policies are a problem, they think that Donald Trump, and his personality si the problem. But, what’s really pissing the American public off are his policies. In fact, the hard core Trump supporters, the thing they like most about Donald Trump is his abrasive, disgusting personality.

So, you’re not gonna win if you just simply repackage it in another wrapper. However, that hasn’t stopped the Democrats from taking this, and they’re already doing opposition research, expecting to run against either Mike Pence or Nikki Haley for the 2020 election, and it is worth pointing out that they’re doing opposition research, trying to dig up dirt on these people, rather than trying to come up with viable policies that the public might actually like. So, in essence, the Democrats are gearing up to run another failed 2016 campaign, in the year 2020, against any Republican they decide to throw against Donald Trump.

This whole thing, at this point, is an absolute disaster. Republicans don’t know what they’re gonna do. Democrats have no idea on how they’re gonna forge a path forward, and meanwhile, the rest of the country is sitting here, waiting for someone to step up, offer some decent policies for once, so that we can say, “You know what, party identity aside, this person clearly has our best interest at heart.” And I know when I say that, a certain name probably pops into a lot of people’s heads, and yeah, there’s one or two folks who fit that criteria, but that’s about it. When it comes to establishment Democrats and establishment Republicans, at this point, all they care about is getting that victory, not about the policy.