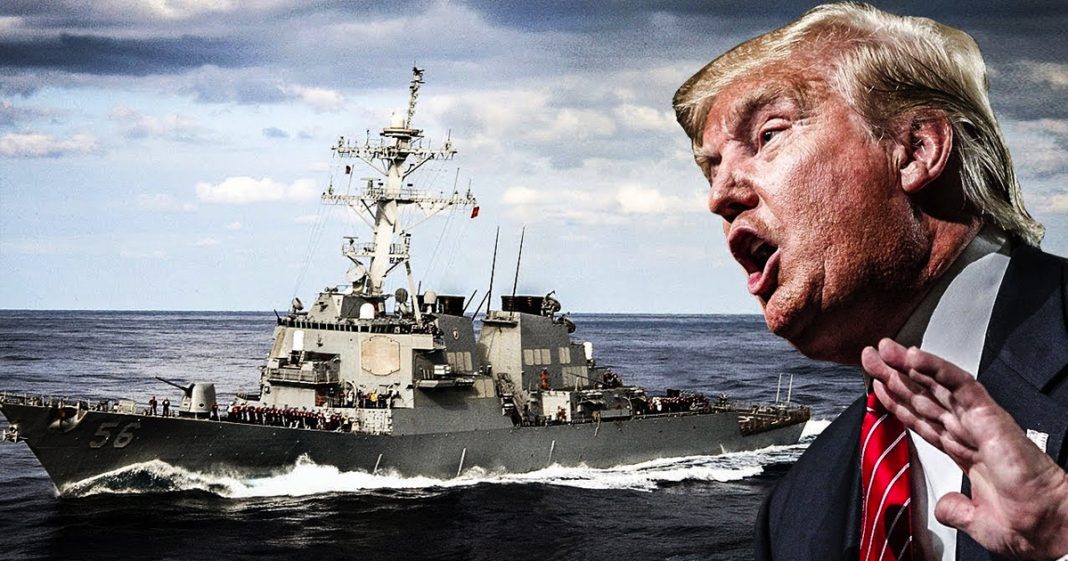 On Sunday, the USS John McCain crashed into a merchant ship near Singapore, leaving 5 U.S. sailors seriously injured and another 10 are missing. When President Donald Trump heard the news, his response was “that’s too bad.” And I agree – it’s too bad that these members of the U.S. military have such a cowardly jerk as their Commander in Chief. Ring of Fire’s Farron Cousins discusses this.

On Sunday, the USS John McCain, named after Senator John McCain’s father and grandfather, collided with a merchant ship just east of Singapore, left five sailors injured, four of whom had to be flown to Singapore for non-life threatening injuries. But 10 other US sailors, US military members, are lost. Currently there are search and recovery efforts going on but 10 sailors have not been accounted for.

Could you imagine what would have been the right wing response if either Hillary or Obama, after the Benghazi incident, said, “Oh, that’s too bad.” No, absolutely not. This is an unacceptable response from an unacceptable human being, who happens to be the President of the United States. I’ll give him credit for this, technically the military did not announce this news until 30 minutes after Trump was asked the question, so even if he didn’t know about it yet, I’m going to go ahead and make up a response on the spot. I have not been fully briefed on this situation, thoughts and prayers are with our US soldiers, we will get to the bottom of this and make sure that our soldiers are safe, because their safety is our number one priority.

There you go, I did it. Didn’t think about it, just popped into my head. A diplomatic, appropriate response that didn’t include the words, “That’s too bad.” People could be dead, you idiot, and you just have to say, “That’s too bad.” The worst part is, we see the picture of him getting off the helicopter with his wife next to him and his young son on the other side of him. I feel this overwhelming swell of sympathy for Barron Trump. He’s walking next to his father, his father being one of the worst human beings alive in the United States today, and I don’t even know if that kid fully comprehends what’s going on, or if he even cares or if he knows more than we do. But that is sad for that kid.

It’s even sadder for the members of the US military who have to call Donald Trump their Commander in Chief. When they get hurt, when they get injured, when they get lost at sea and possibly die, the only thing he has to say about it is, “That’s too bad.”