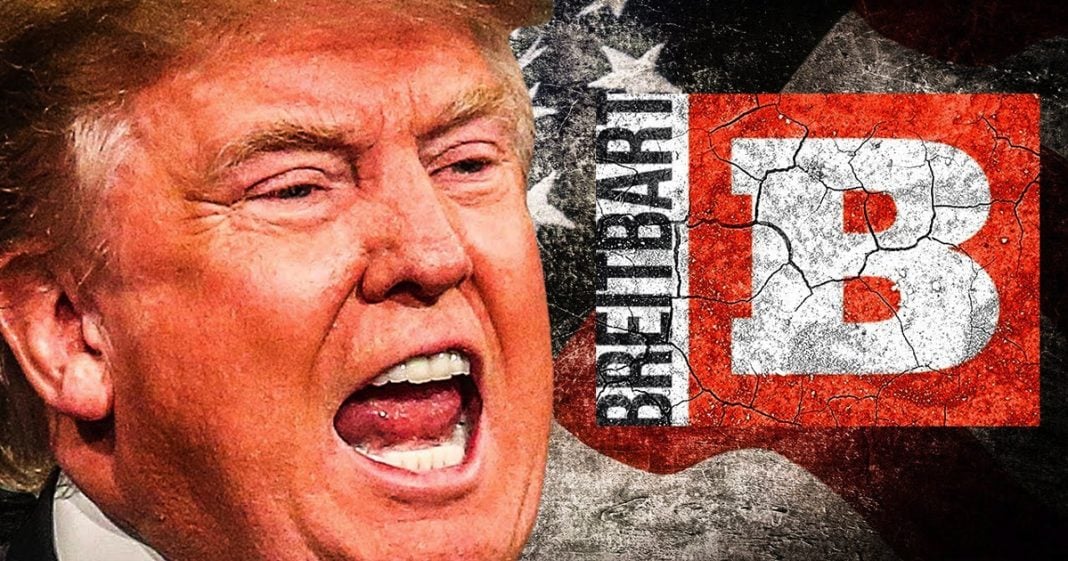 Immediately following Steve Bannon’s abrupt firing from the White House, his former employer Breitbart not only welcome him back to their ranks, but they also declared war against the White House. And they weren’t alone. Conservative media outlets have promised to stop holding back against the Trump administration, and Bannon is a guy that Trump should be very afraid of. Ring of Fire’s Farron Cousins discusses this.

On Friday, most Democrats and people who’ve been paying attention to the Trump Administration were celebrating the fact that Steve Bannon, the former Breitbart executive, was fired from his position in the White House. Now, we also admitted that obviously this does not abdicate the administration’s role in any of the racist bigotry that they’ve displayed since coming to office, but at least it’s some kind of a tiny little maybe start. But there’s one group that’s really not happy about Bannon being fired, and that just happens to be Republicans. After Bannon was fired, he immediately went back to Breitbart. Yes, he is back at Breitbart already, and they have decided that now they’re pissed off with the Trump Administration. In spite of the fact that both Trump and Pence were tweeting out on Saturday morning how much they love Steve Bannon, and we thank you for your service, and oh, please don’t spill any of the secrets you know about us. They may not have said that last one, but that is basically what their we love Steve Bannon tweets were all about, right?

I don’t think Steve Bannon’s going to hold back. Right-wing media outlets, Matt Drudge, Breitbart itself, have now declared some kind of war against the Trump Administration, though not necessarily against Donald Trump himself. See, Steve Bannon, and his little friends over at Breitbart, believe that he was pushed out of the administration by Jared Kushner, and possibly some other folks within the administration, including H.R. McMaster, Trump’s national security advisor. What they’re doing is they’re actually starting to run stories trying to take down individual members of the Trump Administration that they feel are responsible for Bannon’s ouster. H.R. McMaster in particular this past weekend, Breitbart already ran a story, saying that he was a Quran-kissing terrorist sympathizer, and one can only imagine what they’re going to end up reporting about Jared Kushner once they finally get that ball rolling.

Here’s what’s interesting about this entire thing, is that Bannon is a guy who knows things simply for the fact that he was there. There’s a lot more that he could reveal without having to resort to these lies like they’re telling about H.R. McMaster, and the inevitable lies that they’re going to tell about Jared Kushner. Bannon knows the truth. Bannon knows things that probably could take these guys down, that actually have a little bit of credibility to them. But Breitbart is so ingrained in that whole fake right-wing news media niche that they won’t bother reporting the real damning things about these people, because they know that their audience can’t understand it, so they have to make up these outlandish lies that their little base will eat up like candy, and that’s how they’re going to keep people loyal to Breitbart and not to the Trump Administration.

At the first sign of weakness from the Trump Administration, which Bannon has already hinted at, Breitbart is going to go at Trump with full force. Bannon admitted shortly after being fired in an interview that the White House that we had hoped for, the one that I was a part of, is gone now. The Trump presidency is over as we know it, is what Bannon said. He was specifically referring to the policies that Bannon and the Breitbart crowd brought to the White House, but I think we all know what he really means. He’s waiting for Donald Trump to slip up, to screw up, to break one single promise to that alt-right Breitbart base, and the second he does, Bannon is coming out guns blazing with all of the bad information that Donald Trump doesn’t want the world to know.