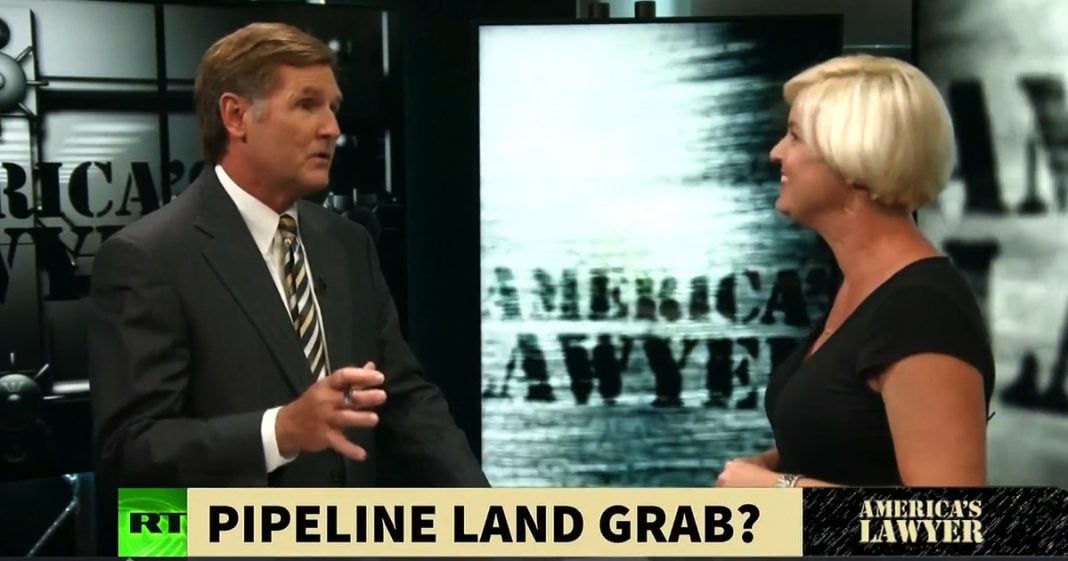 Via America’s Lawyer: Mike Papantonio is joined by Mollye Barrows, Legal Journalist for The Trial Lawyer Magazine, talks with Mike about how Virginia property owners are going to court, saying the Federal Energy Regulatory Commission is overstepping its bounds in allowing a private company to seize their land to build a for-profit pipeline.

Mike Papantonio: Virginia property owners are going to court saying the Federal Energy Regulatory Commission is overstepping its bounds in allowing a private company to seize their land to build a for profit pipeline. Joining me now to talk about this is Mollye Barrows, legal journalist for the Trial Lawyer Magazine. Mollye in this case, we’ve heard imminent domain is supposedly there for the public good. It’s so the government can take a piece of property for the public good.

Mike Papantonio: Not the private good. What’s your take on this? This is kind of a crazy little development, isn’t it?

Mollye Barrows: Well, it’s interesting and in fact, if the plaintiffs win this lawsuit it could have repercussions across the country for any number of other pipeline projects. As you know, eminent domain has long been a controversial issue. The government coming in, taking property from private owners, but like you said, it’s supposed to be for the public use. Well, in this particular instance, apparently the Federal Energy Regulatory Commission has regularly been handing out these permits to these pipeline companies based on the fact that, ‘Hey, they’re providing natural gas to somebody somewhere, so it’s for public use.’

Well, these particular residents in Virginia and West Virginia have filed a suit saying, ‘Yeah, well your 300 mile long pipeline, we own property right alongside of it, you’re taking our property and the constitution says it’s supposed to be for public use. Well, it’s not for our public use and it’s also, we’re supposed to be compensated for it.’ Neither of which, they say, the federal government or this company, the Mountain Valley Pipeline, are demonstrating an intent to really compensate them or use this natural gas for their good. They’re contesting this based on the fact that their constitutional rights are being violated.

Mike Papantonio: I mean, their property rights, their constitutional rights, their ownership rights, all are being violated here. This is a good case. This is something that the attorney absolutely should make big end roads, because it’s an important case. What’s the story behind, though, the Federal Energy Regulatory Commission getting involved in this? Why are they involved?

Mollye Barrows: Because they have to issue the permit that allows the project to go forward, and the only reason the residents even have time now to address it from what I understand is that recently there was a study that found that there could be some potential environmental impacts from this as well. Now these citizens are basically saying, ‘Hey, we want this addressed, the potential environmental impacts, as well as the fact that they may be violating our constitutional rights.’ It would seem as if the Federal Energy Regulatory Commission has been being used as a way for these private companies to get their permits to move forward on these projects under the guise of eminent domain, if you will.

Mike Papantonio: Isn’t this just another example of corporate America capturing what should be an oversight agency? Should be a public oversight agency, just like we see with the FDA, the SEC, you name it, the EPA. This trend for corporations to now take what should be regulatory folks that are overlooking and trying to protect consumers and landowners, in this situation, property owners, but we see corporate America making such huge end roads to really destroy all those possibilities. This is playing right out in front of us. What are the residents affected by the seizure arguing about in this lawsuit? I mean …

Mollye Barrows: They basically want the government to put a stop to it. They say, ‘What you’re doing, what you’re allowing is not constitutionally sound. You are violating our rights and we want to put a stop to it.’ Basically, right now they’re in the process of evaluating the merits of this case and deciding if it can move forward or not. You make a great point. If it weren’t for these trial lawyers bringing this to their attention and arguing the Constitution, it’s almost become standard business. It’s the way they do business, their quid pro quo. A company comes in and says, ‘We’re providing a natural gas pipeline.’ Okay, we’ll that’s good enough to qualify as public use, and these attorneys on behalf of these residents are coming in and saying, ‘Just because it’s providing natural gas to somebody somewhere does not equate to public use, so you are violating their rights.’

Mike Papantonio: Mollye, thanks. Another crazy case, but this expansion of the corporate control of our entire economy is just getting out of control, this is a good example of it.