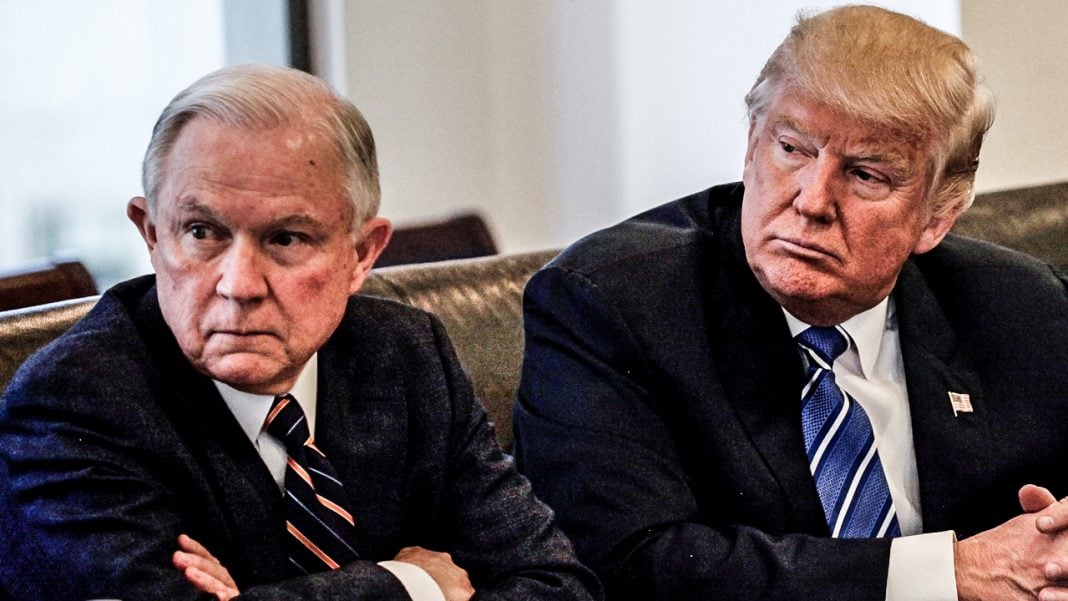 Donald Trump and his attorney general Jeff Sessions have been on a rampage against leakers recently, but the talk of leakers has now evolved into an attack on journalists. The administration wants to strip legal protections away from American journalists, effectively giving Trump and crew a free pass to throw the 1st Amendment out and throw journalists in jail for doing nothing more than reporting the truth. Ring of Fire’s Farron Cousins discusses this.

Last Friday, before white supremacists marched on Charlottesville, noted white supremacist sympathizer Jeff Sessions, who also happens to be our attorney general, he gave a press conference where he talked about the leakers, those notorious people that Donald Trump has been going after since day one of his presidency because he’s angry about the fact that people are speaking to the press and telling them what it’s really like inside the White House with Donald Trump as your boss. Jeff Sessions gets out there, he gives this little speech, says we’re going to crack down on these leakers, we’re going to find out who they are, we’re going to get them out of the administration, we’re going to run a tight ship from now on. Full steam ahead. No problems here. We’re going to root them out, we’re going to get them out, and everything’s going to be great.

Then his speech took an interesting turn. Rather than just going after the leakers, Jeff Sessions, with support from Donald Trump, said they’re also going to start going after media outlets, because why the hell not. Jeff Sessions said that they’re going to start issuing subpoenas to journalists in this country to force them to reveal their sources on stories about Donald Trump. Now, he didn’t add the “about Donald Trump” part, but I did. You know why? Because that’s what this is about. We are coming dangerously close to infringing upon some of our most valuable First Amendment protections because of Donald Trump’s fragile ego.

Now, keep in mind, so far during this Trump administration, no one has leaked any information to the press that has compromised American lives, that has resulted in anyone dying, or that has otherwise endangered the U.S. national security apparatus. All they’re doing is explaining how horrible Donald Trump is as a person, and they are pissed off. I ask you, Trump supporters, is it worth losing our First Amendment protections just so your president can feel better about himself at the end of the day, just so he doesn’t have to read so many negative stories?

Because I can promise you, as these things always do, it’ll progress. Today it’s the First Amendment. We all know what comes after one, right? The number two. Soon it’ll be the Second Amendment. You may decide it’s best for you to keep your mouth shut on this issue because you don’t really care if these stupid liberal journalists go to prison, but just keep in mind they’ll be nobody left to fight for you when the government finally does decide that you’re too stupid to own a gun or that you can’t be trusted because they’re so damn paranoid. At the end of the day, that is what this is about. This is Donald Trump’s paranoia infringing upon our constitutional rights.

Is it worth it, Trump supporters? I don’t think so. I don’t think any other rational-thinking human being would agree. We have to stop this. Donald Trump is literally assaulting the U.S. Constitution by trying to strip us of our rights. The press has the right to publish these things without the interference of the federal government, and Friday, Jeff Sessions, U.S. Attorney General, said we’re trying to take that away from them because this is what Donald Trump wants us to do.