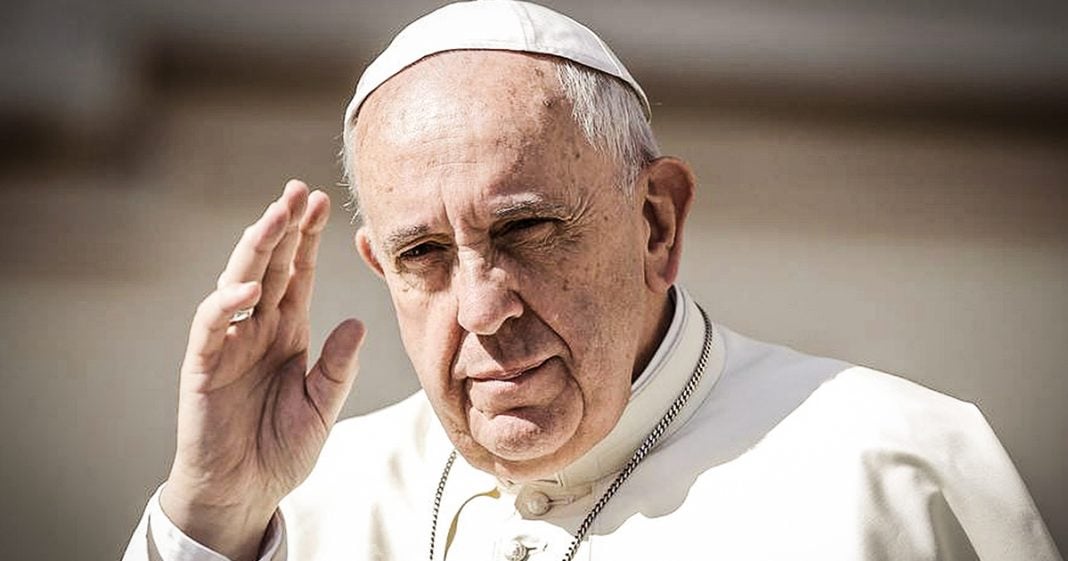 Evangelical Republicans in the United States are not happy about the fact that the Vatican recently called them out for mixing their religion with politics, and they are now lashing out at the Vatican. It must be hard for people to be exposed to the disgusting truth about what they’ve done to religion, but that doesn’t make the statement any less true. Ring of Fire’s Farron Cousins discusses this.

Several weeks ago we talked about the fact that a official associated with the Vatican penned an op-ed, if you will, in a very prestigious Catholic magazine, talking about the problems with the religious right here in the United States and that they have turned away from religion and, in fact, have bastardized their own beliefs in order to support the American Republican Party.

Now, several weeks went by, and we didn’t really hear much after that. But, finally, Republicans here in the United States are freaking out about this article. Why? Because it exposed them for what they have done to an entire religion and how they have duped millions of people in this country into supporting a Republican Party that has nothing to do, nothing in common, with any form of religion. That’s what’s really at the heart here.

We have evangelical leaders throughout the United States, including some Catholic leaders, because Catholics were also called out in this article by the Vatican in the United States for saying, “You’ve abandoned your religion. You’re using it to convince people to vote Republican, and you need to keep your religion out of politics.” That’s it. That’s all they want and they want people to stop skewing the words, the teachings, of the Bible and using that to justify their own hatred and bigotry in the United States, which is something that happens all too often. Evangelicals are constantly wrapping their hatred up in the Bible.

Again, they’re super-pissed. We have religious evangelical leaders lashing out right now at the Vatican, because they don’t want people to think that all they’re doing is twisting people’s words around so that they support a party based on one issue, and that one issue is abortion. When you look at everything else that evangelicals allegedly teach: caring for the sick, feeding the hungry, clothing the poor, they don’t do any of that anymore.

Yes, I know. There are churches throughout this country who do try to do those things; but, as a whole, the major evangelical leaders, the real scumbag televangelist types, the only thing they care about is abortion, and they get their entire flock of sheep to vote Republican based solely on that abortion issue, ignoring the countless other Biblical things that Democrats actually are trying to enact in the United States, like increasing welfare and unemployment benefits, and Social Security and Medicare for all, and Medicaid, school lunch programs, after-school food programs. Those are Democratic ideas, not Republicans, and those are people damn in line with what the Bible says we should do.

Again, I don’t care if you believe in the Bible. I don’t care if you don’t. That’s your personal choice. I would never impose what I think on anyone, not even my own children. It’s up to you to decide whether or not you want to believe or you don’t, and there’s nothing wrong with however you choose to make that decision. But the Republicans in this country have used religion as a tool — and this is what the Vatican pointed out — to manipulate millions of people into supporting a party that has nothing to do with the teachings of Jesus. It all has to do with supporting the wealthy, screwing over the poor, and masking their bigotry with pages from the Bible.