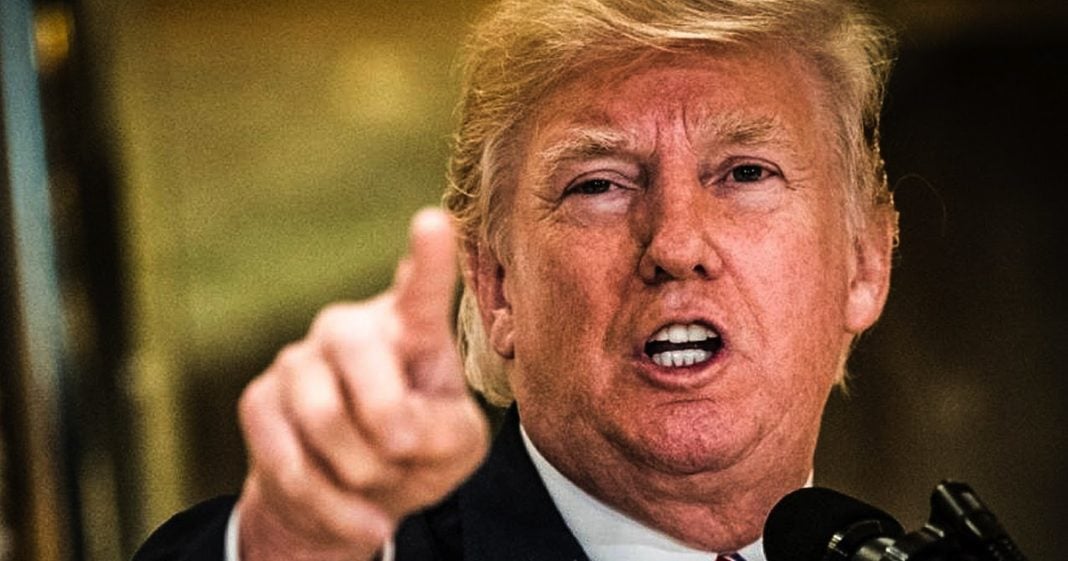 Donald Trump loves to tell the story of how General Pershing handled extremists when he was in the military. But there’s a few problems with Trump’s story, the most important being that the event he loves to describe never happened. And if it had, it would have been a war crime that would have landed Pershing in prison. Ring of Fire’s Farron Cousins discusses this.

After the attack in Barcelona this week, Donald Trump rehashed one of his favorite war hero legends. It was the legend of General John Pershing. See, Pershing, according to Donald Trump, according to a story he told on the campaign trail and then rehashed it this week on Twitter, Pushing was overseas, or Pershing, excuse me, dealing with terrorism. His group had rounded up couple dozen terrorists. I think Trump says 25. Lined them all up, took 25 bullets, dipped them in pig’s blood, gave them to his 25 rifle men, and they all opened fired at each one killing a terrorist except for the 25th man. They only killed 24 according to Trump. Then, General Pershing got up in that 25 guy’s face, and he said, “You go back to your village, whatever. You tell them what you saw.” Then according to Donald Trump, there wasn’t terrorism in that part of the world for decades.

It’s a fun story, right? Only one problem with it. Actually, there’s several problems with it, but the biggest is that it never happened. Donald Trump, this war hero that he’s talking about, the person did exist, but this is even that he has repeated over and over never took place. More importantly, if it had, that’s a war crime, you jackass. You’re sitting there praising somebody who may or may not, according to whatever history Donald Trump subscribes to, committed a war crime, and you’re sitting there telling us that it’s great. Luckily, it didn’t happen. There haven’t been decades and decades of peace since terrorism erupted in parts of the world, you idiot. This is just Donald Trump further lying to his base of people who do not take the time to go out and read something, or maybe fact check something.

This thing that Donald Trump told earlier this week on Twitter about Pershing, again, he said it on the campaign trail, gave it during a speech, and it was immediately debunked by the media. That hasn’t stopped Donald Trump from repeating this lie again and again. His base probably believes it. They think that that’s how you have to deal with terrorism. You go over there, you dip some bullets in pig’s blood and you just shoot them all, except for the one. That one has to go back and say, “Oh, my god. They did a horrible thing. We were so wrong in everything we did.” That’s now how it works. That’s not how international laws work. That’s now how the anti war crime legislation, the Geneva Conventions, that’s not how it works. That’s what Donald Trump wants to do, and that’s just one of many reasons why this man can’t serve as president of the United States.

You can’t go out there and advocate for war crimes, mythical or real. Yet, that it is what he’s doing. That is what he thinks is okay, and that’s what his base thinks is okay. Those of us back in the real world understand that when you commit war crimes there are always horrible consequences, typically for the United States. Don’t believe me? Look at what happened at Abu Ghraib and how Al-Qaeda rose in their ranks as a result of those photos that came out. Then, tell me if you think shooting people with pig’s blood just to send a message is such a good idea.