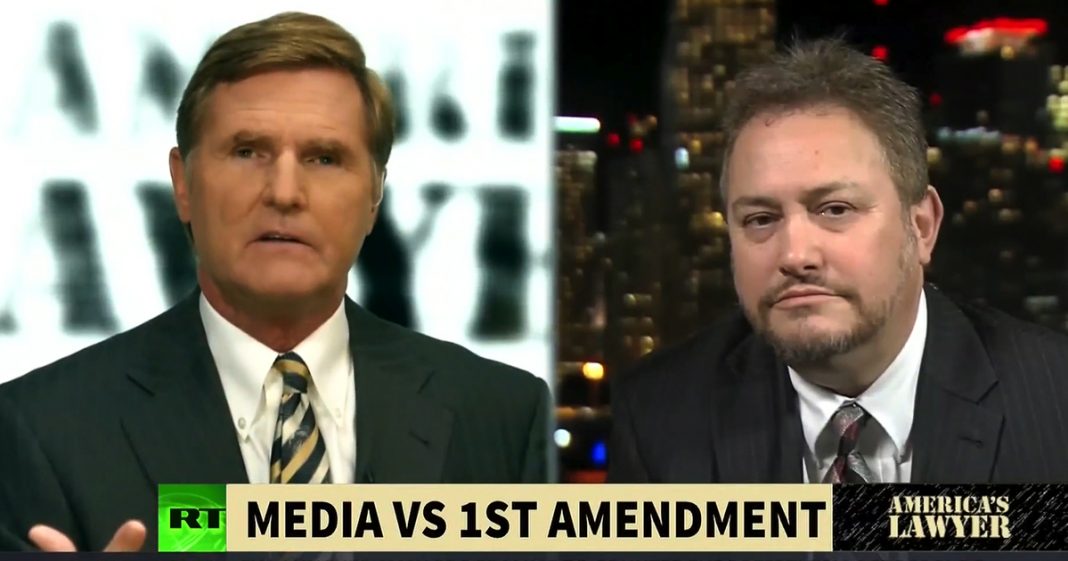 Via America’s Lawyer: Mike Papantonio takes a look with attorney Dan Soloway at the legal aspect of the media – what they can say, what the 1st Amendment covers, and what media outlets do to get themselves in serious trouble.

Mike Papantonio: The 1st Amendment of the U.S. Constitution covers a lot of ground. It guarantees us that the federal government won’t establish a state religion; it gives us the right to assembly; the right to free speech; and it offers protections for the press. And it’s the latter – the freedom of the press – that seems to create a lot of confusion.

In it’s simplest form, the 1st Amendment’s protection of the press insures that the federal government will not actively censor the media. That’s about it. Laws and court rulings down the line extended that definition to shield the media from certain libel and slander issues, but they can still be held liable in most cases. In other words, the 1st Amendment does NOT give the media a free pass to do whatever they want.

A few decades ago, these laws weren’t seen as a nuisance for American media outlets. They reported the facts and that was about it. But in the 1990’s, when then-President Bill Clinton signed the catastrophic Telecommunications Act of 1996, media outlets were gobbled up by big conglomerates who put profits before everything else, and suddenly honest, investigative reporters found themselves with fewer resources to conduct investigations, while gossip and trash dominated the front pages of newspapers and our nightly newscasts. And when these media outlets began reporting on hearsay and speculation, they began running into more and more legal problems.

For example, a blogger who was trying to capitalize on anti-Donald Trump web traffic published an article in August 2016 where he claimed that Melania Trump had worked as an escort in the 1990’s and that she suffered a nervous breakdown during the Presidential campaign. It was a lie. He was sued for defamation, and promptly settled for an undisclosed amount.

Today, it is the quest for website clicks, viewers, and the need for higher ratings in order to appease advertisers that motivate most media outlets in the United States, from greed driven corporate-owned propaganda machines to independent bloggers. This has led to a serious downgrading of quality journalism in America. Again, it wasn’t always like this. Yes, we’ve always had bad journalists out there, but what we’re currently experiencing is a plague of wannabe reporters who just make up the facts as they go along so they can increase the ad rates on their websites and TV shows. The result is more legal liability for reporters, and less factual information for viewers.

Joining me now to explain what’s going on is attorney Dan Soloway. Dan, let’s start with the First Amendment protection, that’s your expertise. What kind of protection is applied to the media under that amendment? If we just talk about broad terms, what is it?

Dan Soloway: In its broadest view, the Constitution of the United States protects the press in terms of their ability to provide pure opinion. Pure opinion is something that can include criticism of the government, of governmental actors, and so long as it is opinion, it is protected. That’s what separates the United States from anti or non-Democratic nations such as Russia. We can criticize our own government and our own government actors. There are limitations, as you mentioned. Defamation of character or using false statements or lies to injure somebody, that’s not allowed. That doesn’t fall within the constitutional protections of the United States. But absent of libel or slander, we have pretty massive protections in this country emanating from the First Amendment to the Constitution.

Mike Papantonio: Dan, those types of protections have been explained and actually expanded in detail in court rulings over the years to explain the limits of libel, for example, or slander. How are those rules now being applied to the media? It seems to me that people are really going after media in a much bigger way than I ever remember. Having studied journalism back at University Florida back in the late ’70s, I can tell you, they have expanded the possibilities of going after media everywhere from the blogger to corporate media. What’s your take?

Dan Soloway: Well, the biggest rulings of the United States Supreme Court, such as New York Times vs. Sullivan or the Gertz case, these are Supreme Court decisions that actually gave protection to the media. The protection they afforded was to say that you can make false statements. If it’s a public person that you make these statement about, you are not liable for these false statements unless the statements were uttered with what is known as actual malice. That can be defined as the reckless disregard for the truth or the intentional indifference to the truth. Absent actual malice, so long, again, as the victim of the false statement is a public figure, they are protected.

Now, that’s different if it’s a private person. If it’s a private person and you show something less than reckless disregard for the truth and just simply show that they were careless in their reporting and that the statement was false, then there is liability under the law defamation, be it libel the written word, or slander the spoken word. These early Supreme Court cases actually did protect the media. They have receded somewhat since the blogging, and social media, and the other sources of free speech are not the press, the Fourth Estate as we understood it. But those original decisions helped the media, didn’t hurt them.

Mike Papantonio: Listen, Dan, my take on it may be off base, but I see there being more and more inroads that people are making to go after the media. We used to have something … Well, it’s still there. It’s slander per se, or libel per se. That’s where you make certain statements, you call somebody a criminal, you say they have an awful sexually transmitted disease or they’ve committed a crime. Those things you wouldn’t even really have to get beyond the fact, did the media say that and did they know the truth at the time they said it? You’ve got a lawsuit that could cost a media outlet hundreds of millions of dollars. Do you see these inroads being increased as time goes on? I see it in the last 10 years. What’s your take?

Dan Soloway: I don’t think we have, as a press, I don’t think the press has the type of relationship with the powers that be like they should. We have the White House calling names of different reporting agencies. The difficulty we’ve got is that the freedom of the press is being gone after. Put it this way, when the White House is going after leakers, for instance, we do not have journalists getting much protection. The aggressive attorney general going after a journalist, the journalist has very little protection. If the Department of Justice wants to go after that journalist, there’s no constitutional protection there. If it’s a for-profit thing, where they’re just lying, that’s one thing, but if it’s something that is news worthy, something important for us all to hear, we’re going to have some difficulty with an aggressive prosecution to try and get at journalists.

Mike Papantonio: We’re seeing more and more circumstances where a person can sue a newspaper, they can sue a media outlet, even if they’re slandered. What about other forms of misinformation? For example, Alex Jones, he said that the government’s putting chemicals in the water and can cause people to turn gay among other ludicrous kind of statements that we expect out of him on a regular basis. Is he protected from legal recourse by pushing his conspiracy theories? I mean, can you just say it and it’s okay? What’s your take on that kind of thing in particular with an Alex Jones kind of character? How crazy can the media turn as far as being this idiot system and still be completely protected by the Constitution?

Dan Soloway: Well, Mike, they can get pretty crazy. I mean, conspiracy theorists, if they couch their statements in pure opinion, they’re going to be protected by the First Amendment. The difficulty they’re going to have is when they couch their opinion in false statement. Let’s say the conspiracy theorist says, ‘Well, I think the president is a Satanist, because I saw him punch somebody the other day.’ Well, that false statement that the president punched somebody, that can be sued over. The opinion that he might be an evil character, that is not something that can be sued over. Again, if he’s a public figure, putting chemicals in the water, well, he’s being shifty there because the government isn’t a legal entity that can sue. He would have to accuse a governmental actor of doing something wrong. But there, where he says, ‘Oh, the government’s put chemicals in water,’ who is the government to be able to sue as a legal entity? That’s kind of tricky. The conspiracy theorists have as much protection as everybody else.

Mike Papantonio: There’s been some court cases in recent years involving the disclosure, more accurately, the non-disclosure of anonymous sources. We see it. I mean, New York Times is going crazy with it. Wall Street Journal’s going crazy. Washington Post. Every day it is some anonymous source is making these outrageous statements, and then we find out three days later, there was no source, that the whole thing was just fabricated. Or if we find the source, the source says, ‘No, I didn’t say that.’ What is your take on what’s happening with media? I mean, aren’t they inviting themselves to public anger? When you get public anger like that, don’t they invite more lawsuits against them, even if somebody says, ‘You know what? I don’t care if I lose, I’m going to take this shot.’ What’s your take?

Mike Papantonio: Dan Soloway, thanks for joining me. You honestly are one of the better First Amendment lawyers in this country. My take is, is that we’re experiencing a ground change in the way that media interacts with a legal system. They’re more susceptible to being sued. Thanks for joining me.