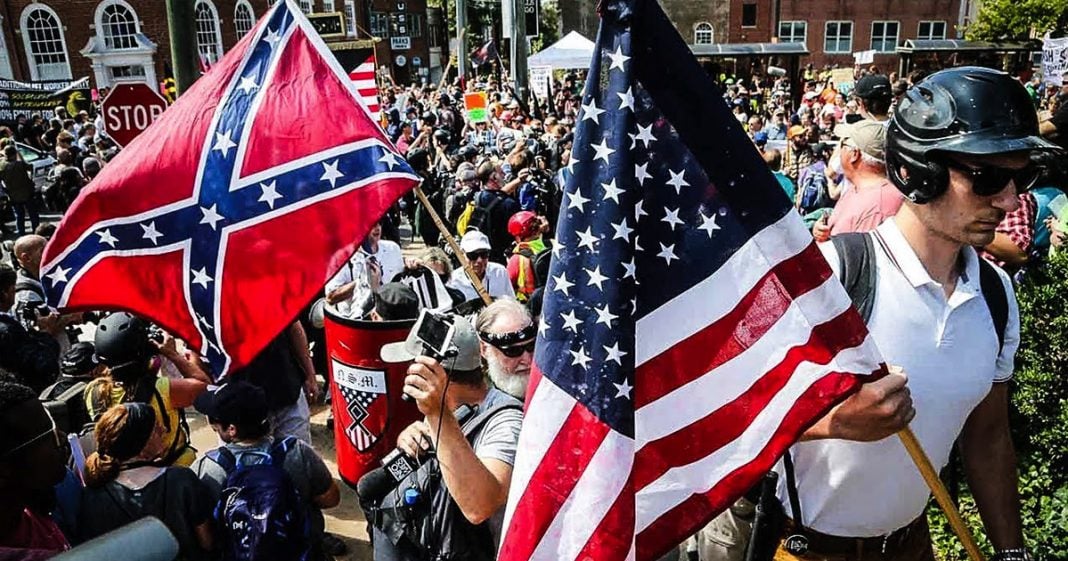 According to a new report in The Atlantic, the white nationalist website Daily Stormer used the promise of sex to lure more people to join their recent rally in Charlottesville. They told young men that women would be throwing themselves at them because they would be considered “the bad boys.” So apparently all it takes to turn a young white idiot into a racist is the promise of a hookup. Ring of Fire’s Farron Cousins discusses this.

If you’re not familiar with the white nationalist website, the Daily Stormer, you may have come to find out a little bit more about it this week as it turns out GoDaddy kicked them off their servers, then they went over to Google. Google immediately kicked them off their services. Now, that white nationalist Neo-Nazi website has found a new home with web hosting services in Russia. But the Daily Stormer is more than just a Neo-Nazi website, it’s the website that helped organize the rally, the race riot, that took place in Charlottesville this past weekend.

You know how they were able to recruit so many people to come to this rally? According to a report by the Atlantic, they used the same tactics that ISIS does. One of those tactics specifically is slightly more disgusting than the rest. On the Daily Stormer’s website, in order to entice young men, young white men, to come to Charlottesville and protest, they promised them this. Here’s the direct quote from the Daily Stormer website. “Random girls will want to have sex with you because you’re the bad boys. Every girl on the planet wants you now.” Those were the exact words that the website put out to entice these sex-hungry, racially charged dude bros to show up in Charlottesville. You’re going to get so much sex if you come here, because nothing makes a woman want to swipe right more than seeing a guy with a Tiki torch in one hand and a Nazi flag in the other. Right?

This also further shows how misogynistic the stupid white nationalists in this country are, because not only do they hate people with different skin colors, they also apparently think of women as prizes that these white supremacists need to win. But they can only do that if they embrace the warrior culture, which is once again another tactic used by ISIS. ISIS, in terms of the sex thing that Daily Stormer promises, says that if people join ISIS, we’re going to get you wives and we’re going to get your female sex slaves. All you have to do is come fight for ISIS. That’s essentially, to a lesser extent, what the Daily Stormer was telling people, using this same ISIS terrorist playbook. Come fight with us! Come plow your car into a 32-year-old woman and kill her, and the women are going to be beating down your door. Hey, you see that black guy over there? Go beat him in the head with a lead pipe. Girls are going to be throwing their underwear at you like you’re Justin Bieber. That’s not exactly how it works. I don’t think too many women in this country are turned on by disgusting displays of racial violence perpetrated by white men in Polo shirts and khaki pants standing next to people in full KKK regalia. Not how it works.

The Daily Stormer, this entire movement, everything they say, everything they do, is absolutely reprehensible. When we learn now that they’re using the same tactics as ISIS, then I think it’s time the United States government starts treating these people like ISIS.