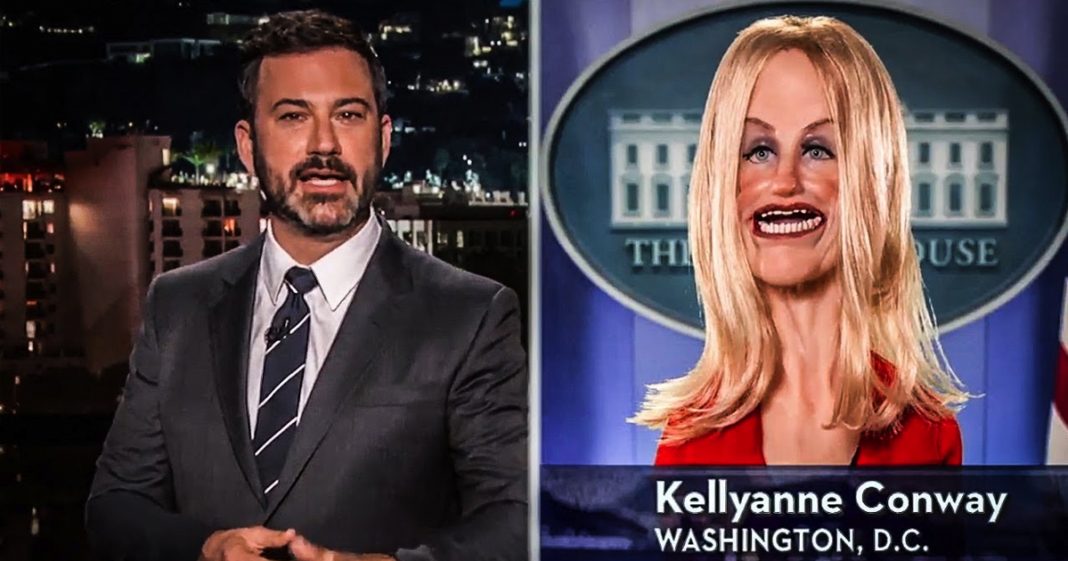 On Wednesday evening, Jimmy Kimmel brought back his show’s puppet version of Kellyanne Conway to talk about reports that the Trump administration sent a scripted response to Republicans to tell them how to respond to Trump’s disastrous press conferences. The caricature of Kellyanne performed exactly as the real Kellyanne Conway would, providing nothing but canned responses and deflecting the questions. Ring of Fire’s Farron Cousins discusses this.

There’s no question that Donald Trump has had a pretty bad week and that’s putting it gently, but whenever a politician starts to leak a little blood into the water late night comedians tend to sense that blood and that is when they attack. That’s exactly what happened on Jimmy Kimmel Live on Wednesday evening when Kimmel decided to once again bring out puppet Kellyanne Conway to help explain away Donald Trump’s disaster of a week. Take a look.

Jimmy Kimmel: Joining us now from Washington is Kellyanne Conway and I want to say, hello. Hello, Kellyanne.

Kellyanne Conway: Hello. Thanks for having me.

Jimmy Kimmel: So, Kellyanne, thanks for being here. Did the White House really send a memo telling republican members of Congress what to say about that mind boggling press conference yesterday?

Kellyanne Conway: That is absolutely not true. Everyone knows that what the president said in his statement yesterday was 100% correct. There is blame on all sides. The violent alt-left must be stopped-

Kellyanne Conway: What? No, that is absolutely 100% fake news and you should be ashamed of yourself for thinking it, Jake.

Kellyanne C.: Go back one. Uh, no, one. That is absolutely not true. Everyone knows what the president said in his statement yesterday was 100%-

Kellyanne C.: That’s outrageous. I’m not reading. I don’t even know how to read.

Jimmy Kimmel: I know- I don’t know, you’ve got such big hands. It really … Hey, wait a minute, was that Cookie Monster? What the hell is Cookie Monster doing there?

Kellyanne C.: He’s our new chairman of the food and drug administration. Jimmy-

It’s actually amazing that even though it’s a caricature, puppet Kellyanne Conway managed to be less racist than Donald Trump the real human being. Kellyanne Conway, the puppet version is actually about as close to the real Kellyanne Conway as you can get. As you can see from the video, she’s obviously doing what Kellyanne Conway typically does, which is deflecting from the questions that are asked, she threw in a jab at Hillary Clinton at the end because republicans only know how to attack democrats, and she was either highly coached or reading from a script and that’s the bigger issue that Jimmy Kimmel is trying to highlight here. The fact that there are reports saying that the Trump administration sent out a memo to instruct republicans on how to respond to reporter’s questions about Donald Trump’s disastrous set of press conferences.

What’s really interesting. What’s happening right now in this country is that late night television hosts, comedians really, Jimmy Kimmel … Samantha Bee had a phenomenal program on Wednesday evening … John Oliver, even slightly Jimmy Fallon, have been the ones leading the charge to take on the Trump administration. Now, usually, we rely on our politicians and pundits and the media to do this and they’ve done a decent enough job, but it’s really these late night comedians that are coming out and explaining the issue in simple terms that the entire American public can understand. It’s the same thing that led Jon Stewart to be such a hero among this young generation because he explained things in a humorous way, yet also a very serious way. People could understand what he was talking about and in the end, according to polls, viewers of the Daily Show with Jon Stewart had a better understanding of the issues affecting this country than viewers of either MSNBC or Fox news.

That is what these late night comedians are trying to do. They’re not just out there trying to get a few good laughs. They’re also, right now, educating the public and keep in mind, these shows have bi-partisan audiences. They’re not left-leaning or right-leaning, they’re just social commentary. Even people who don’t necessarily want political knowledge are getting it when they tune into these shows and right now, that is one of the most valuable assets that we have as a country.