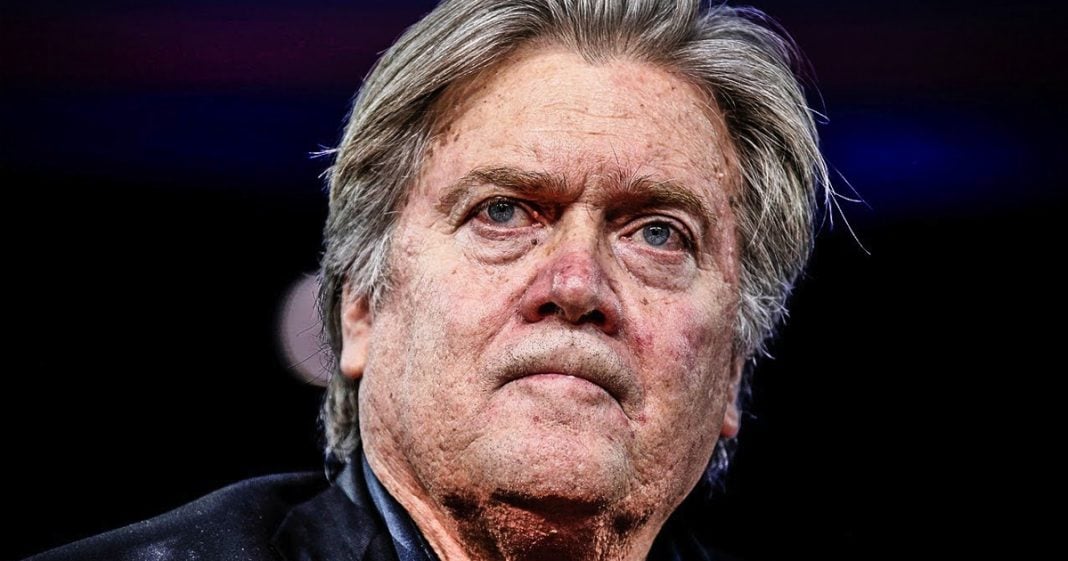 According to reports, Donald Trump did mull over firing Steve Bannon from the White House for a brief time, but decided against doing so because he was afraid of Bannon. The man that Republicans believed was a hard line, no-holds-barred politician has once again proven that he is nothing more than a coward with a large bank account. When he is given the opportunity to stand up and do the right thing, he always cowers and runs away. Ring of Fire’s Farron Cousins discusses this.

During the Republican primary through late 2015 and 2016, Republican supporters of Donald Trump liked to attack his opponents by calling them pejorative names that I don’t want to have to say here, but I’m pretty sure they don’t even understand what that term really means … Basically implying that these men, people like Ted Cruz and Jeb Bush and Marco Rubio, were somehow beta males to Donald Trump’s alpha male.

Donald Trump was their no holds barred, won’t pull any punches, testosterone fueled president that was going to come to the White House and be just a dude-bro like all these guys because he was tough, he was a bit of a bully, he didn’t take any crap from anybody. He is the stereotypical gym frat guy that these guys absolutely loved, and as it turns out, he’s nothing but a coward.

In the last week, we’ve had two separate instances showing that Donald Trump is absolutely not the alpha male that his supporters make him out to be, and instead is a coward who turns tail and runs at the first sign of instability or conflict.

The case in point is Steve Bannon. Right now, cries for Donald Trump to fire Steve Bannon, who came from Breitbart, which he has correctly said is a platform for the alt-right, have grown even louder, and yet Donald Trump refuses to do so. Reports are telling us that the President briefly considered it, but decided to not fire Steve Bannon because he is afraid of him. Because he is afraid of what Steve Bannon would do if he left the White House and then went back to Breitbart. How viciously they would attack him, and, more importantly, all of the little behind-the-scenes secrets that Steve Bannon knows, that he would then be able to report to the public, showing us how dysfunctional and decrepit the Trump administration truly is.

Now, keep in mind, twice this week Steve Bannon came out and defended these neo-Nazis who committed these crimes in Charlottesville. He defended them. He said, “That’s our base.” That is Trump’s base, and that is another reason why he is afraid of Bannon. He knows that if he fires Bannon, he might lose the white supremacist demographic, and without that, he has absolutely no shot of ever winning an election again for the rest of his life.

Steve Bannon is in charge in Washington DC, folks. If Donald Trump won’t stand up to him, then who will he stand up? Yeah, I know a lot of Republicans say, “Man, he was talking tough to that guy thousands of miles away in North Korea.” Yeah, okay. So has everybody else. Did he stand up to Vladimir Putin when he kicked out hundreds of US diplomats? No. He thanked him. That’s your alpha male, Republicans. Your testosterone fueled guy’s guy. Can’t even stand up to a fat little toad in the White House, and certainly won’t stand up to the President of Russia who just kicked out all of our diplomats. Instead, he thanks him for it.

You picked the wrong guy. You picked a guy who ran away from Vietnam as many times as possible complaining that his foot hurt, and instead said avoiding STDs was his Vietnam. Does that sound manly to you? Is that your guy’s guy? Is that your alpha male that you wanted in office? Because that’s what you got, and that’s what you deserve.