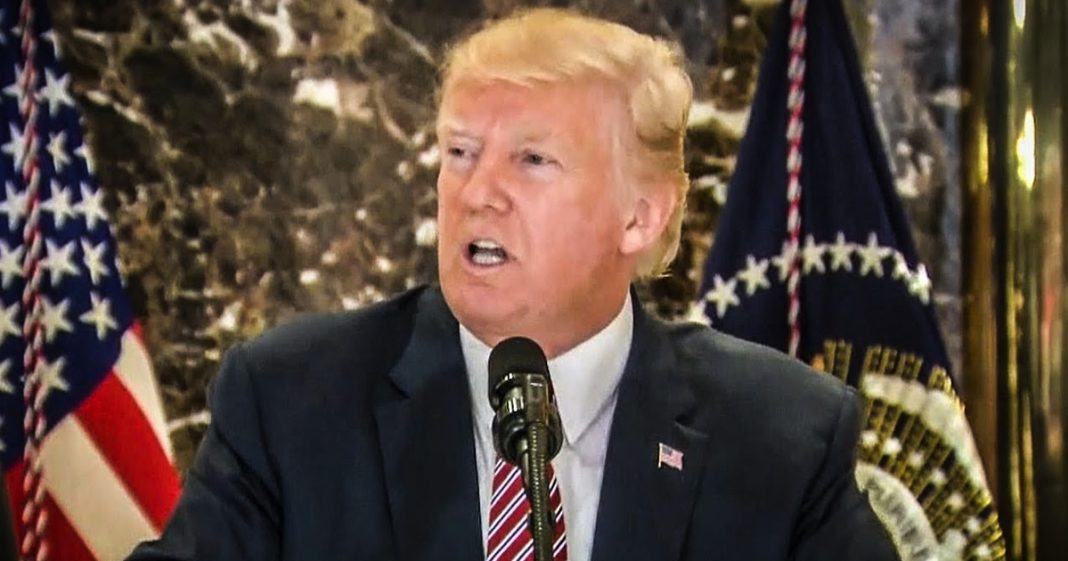 Donald Trump believes the recent race riot in Virginia was simply a misunderstanding between two groups – one that wanted a statue removed, and another that wanted to keep it. He doubled down on his “both sides” rhetoric, effectively appeasing the aggressors who are using hate and bigotry to strike fear into others. Donald Trump is not a leader – He is a coward. Ring of Fire’s Farron Cousins discusses this.

During a press conference late Tuesday, Donald Trump was once again asked questions about his pathetic and delayed response to the events that took place in Virginia this past weekend. Here is what Donald Trump had to say as to why his response was so late, in responding to the fact that a woman was murdered by the alt right. Here it is.

Now, I don’t know Donald Trump personally, but I do understand the things that he says. I pay attention to them. I watch them, I see them, I read them, I hear them. Donald Trump is not the kind of guy who wants to get all the facts before he says anything. That is an absolute lie. Not to mention the fact that we actually had the facts at that point. We knew why this woman was killed. We knew the affiliations of the kid who did it, and we knew Friday night that this was a rally built around racism. Here’s how Donald Trump responds to all of that.

Reporter: Senator McCain defined them as the same groups [crosstalk].

Ah, the classical tactic of deflection. Yes, the alt right’s bad. What about the alt left? Why aren’t you talking about the leftists? Why aren’t you talking about those violent people that were peaceably assembled in the street? Yeah, because I guess they’re as equally as responsible for that woman’s death as the murderer who ran her over. Yeah, that’s not exactly how it works. You don’t go up to Jewish people in Nazi Germany and say, “Yeah, but aren’t you partly responsible for what’s happening?” No.

This two sides bull shit being pushed by Donald Trump is an absolute lie. What’s more disgusting is the fact that he is now adopting the language of the hard core establishment Democrats who hate the Bernie Sanders wing of the party who gave them the title of alt left, and now Donald Trump is using that to say

Donald Trump: You take a look at some of the groups and you see, and you know if you were honest reporters, which in many cases you’re not, but many of those people were there to protest the taking down the statue of Robert E. Lee, so this week it’s Robert E. Lee. I noticed that Stonewall Jackson’s coming down. I wonder, is it George Washington next week, and is it Thomas Jefferson the week after? You know, you really do have to ask yourself, where does it stop?

You want to know where it’s going to stop, Donald? It’s going to stop when we remove every single monument, every single memorial to those people who fought to keep an entire race of human beings enslaved in the United States. How about that? How about it stops when you fire Steve Miller, Steve Bannon, and Seth Gorka? How about it stops when you stop saying that both sides are equally responsible? You know who praised Donald Trump’s response yesterday? David Duke, former Grand Wizard of the KKK came out and said it was a great speech.

Everyone at this point who has half a brain, and that includes a lot of Republican sitting members of Congress, have called Donald Trump at this point a Nazi sympathizer, because that is what his statements yesterday portrayed to the American public. People overseas, they’re no longer laughing at us, they’re scared for us. They understand that we have about as close to a Nazi as possible sitting in the White House. Donald Trump’s response on Saturday, his response on Monday and his response on Tuesday proves that this man is too incompetent and too mentally unstable to be our president.