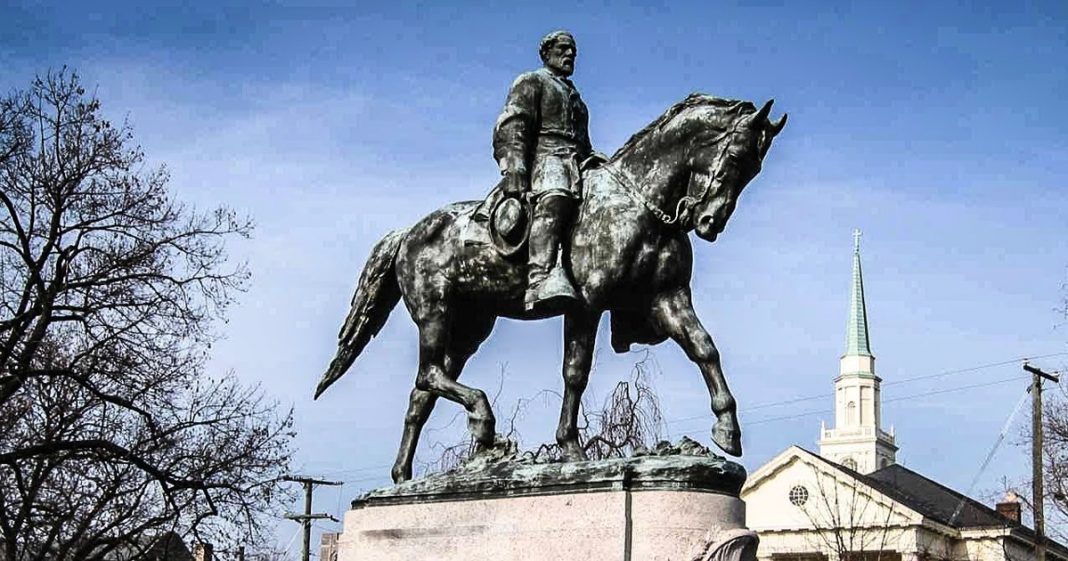 In response to the rise in right wing extremist violence – particularly the events in Charlottesville – protestors and city governments are taking it upon themselves to remove the reminders of racism that are scattered throughout the South. Confederate monuments and statues are being removed left and right, something that should have taken place many, many years ago. It is time to stop glorifying these horrible people and actions that represent a dark point in American history. Ring of Fire’s Farron Cousins discusses this.

By now, I’m sure most people have seen the footage of angry protestors going out and ripping down confederate monuments in the United States. Some have reacted with joy, others reacted in absolute horror that people would destroy these monuments to American history. I say, go for it. Take them down now. But the one thing we’re actually not hearing enough about at this point, is that city council’s all throughout the south, are actually working now to move these monuments and get them out of the public.

So, yeah, the protesters are out there taking these things down forcefully. But they are not the only people working to get rid of these things. So Fox News, you can stop your talking points about these people being just angry, bitter, trying to destroy part of the American history.

And that’s the thing that I don’t quite understand. A lot of people who say that we should leave these things up, claim that we allegedly leave them up because it’s a part of American history. We can’t just whitewash it. We can’t pretend it didn’t happen. We have to acknowledge that, so, you know, we can do better. Well, I admire the fact that you’re trying to wrap your racism in historical fact, but that doesn’t change the fact that as Cliff Shecktor said on Twitter, “These monuments amount to nothing more than a participation trophy for the Civil War in the south.”

That’s what it is, folks. You want to be constantly reminded of that war that you started over slavery that you lost? These are monuments to racism. That is the bottom line. The confederate flag, same thing. There is no reason to fly these in the United States, or have these in the United States. I mean, think about this, nobody’s trying to undo history, or say that we shouldn’t learn about history.

But if you went over to Germany, and went to the holocaust museum, do you think they’re going to have a statue of Hitler standing outside? Do you think anywhere there’s going to be statues of Hitler? No. And it’s the same principle here. We should not have these monuments. They absolutely need to come down. Should have come down decades ago. But more importantly, probably should have never gone up in the first place.

Taking these monuments down does not change the history of the United States, nor does it change our ability to learn about the history of the United States, because these aren’t the people that are going around trying to edit, and change text books. That’s republicans that are trying to do that. And they’re trying to put a happy face on American slavery. Saying that most slaves actually enjoyed it. They’re literally doing that in Texas with their text books.

So, who’s really trying to rewrite history here? Is it the racist republicans? Or is it the people who don’t want to be constantly reminded about a disgusting mark on American history, who are there taking down these statues, and these monuments that serve no other purpose than to remind people who racist this country can truly be?