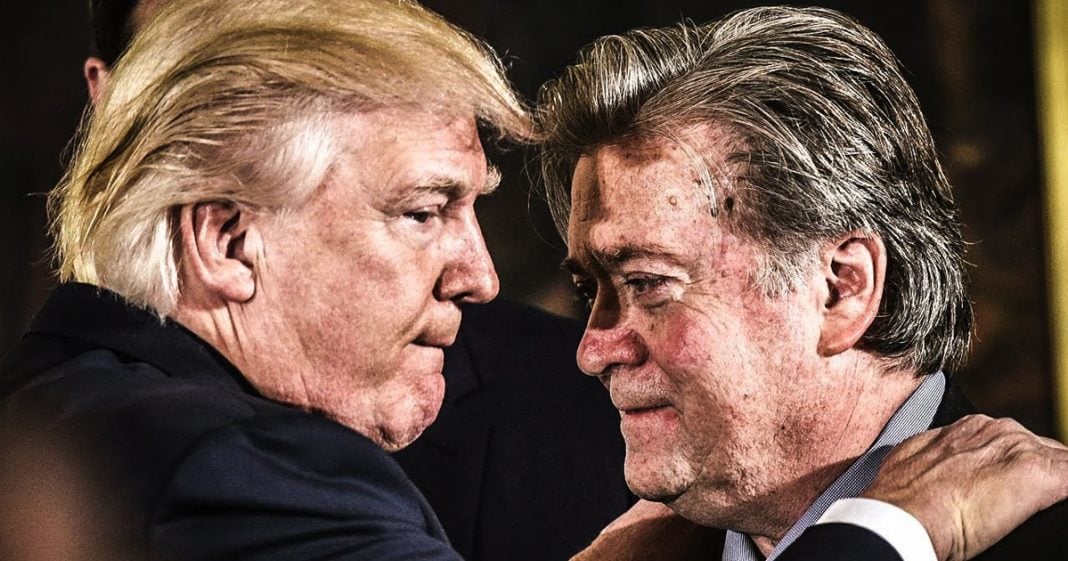 According to former White House communications director Anthony Scaramucci, Donald Trump is being almost completely controlled by Steve Bannon and his former employer Breitbart News. This makes sense considering Trump’s pathetic response to the violence in Charlottesville, as well as his refusal to accept real news reporting and instead rely on fake news sources. Ring of Fire’s Farron Cousins discusses this.

Well, Anthony Scaramucci may have only served as Donald Trump’s White House Communications Director for less than two weeks, he still learned quite a bit during his time at the White House. And according to an interview that he gave to George Stephanopoulos this past weekend, the biggest thing that Scaramucci learned was that Steve Bannon and Breitbart News, Bannon’s former employer, are the ones pulling the strings on Donald Trump at every possible turn.

Scaramucci told Stephanopoulos that he was amazed at the influence that Steve Bannon and Breitbart still have over the President of the United States and that if we want anything to change in this country or with the way that Donald Trump rules, we have to get rid of Steve Bannon.

Now, if you recall back in the very early days of the Trump presidency which actually wasn’t even that long ago, everybody on the internet was joking about how Steve Bannon was actually the President and Donald Trump was just his puppet. All of those memes and things were going around about President Bannon, really just trying to get under Trump’s skin, and then we didn’t hear anything from Bannon for quite some time. But, according to Scaramucci, he didn’t disappear. He didn’t go away. He just went away from the headlines. He is still very much in the President’s ear at every possible turn, telling him what to do, what to say, and that’s why we got such a pathetic response from Donald Trump following the violence and white supremacist’s action in Charlottesville this past weekend. That’s what Scaramucci said. He said he guarantees that that response is what Steve Bannon and Breitbart News wanted.

So, Donald Trump, who has made it known that he has no respect for real news, and that he only relies on fake news outlets like Breitbart, has found a very good friend in both Steve Bannon and the folks over at Breitbart. They’re one of the only news organizations, with the exception of Fox, willing to actually go out there and just say whatever the President wants them to say. Whether it’s true or not, that doesn’t matter. There is really no legal justification or legal reasoning that forces the media to be honest unless, of course, you’re dealing with issues of slander or libel.

But in the case of just reporting what a great person Trump is, Breitbart does it all day long, and, no, you can’t sue them unfortunately for lying, and that’s why Donald Trump loves them so much. They will praise him until the end of time, but he needs to understand this. They’re not actually praising him. They’re praising President Bannon, and as long as Bannon’s little racist self is sitting in that White House, we’re going to see even more horrible policies coming out of Donald Trump. We’re not going to see him denounce the white supremacists who killed a person this past weekend. He’s not going to denounce the KKK. He’s going to openly embrace them. In fact, following this entire horrible response from the President to this tragedy, the only group that said they really liked and appreciated his response was the Daily Stormer, which is a racist website.

So, yeah, I’m sure Bannon and Breitbart are pretty happy about this because that’s their audience. Those are the people they cater to, and those are the people that they’re keeping in the Trump administration so that Donald Trump still keeps that line clear, so he’s got a good line to the white supremacists group, because he knows if he loses them, he’ll never, ever win re-election assuming Bob Mueller doesn’t take him down with this prosecution in the meantime before 2020, before he can actually run for re-election.