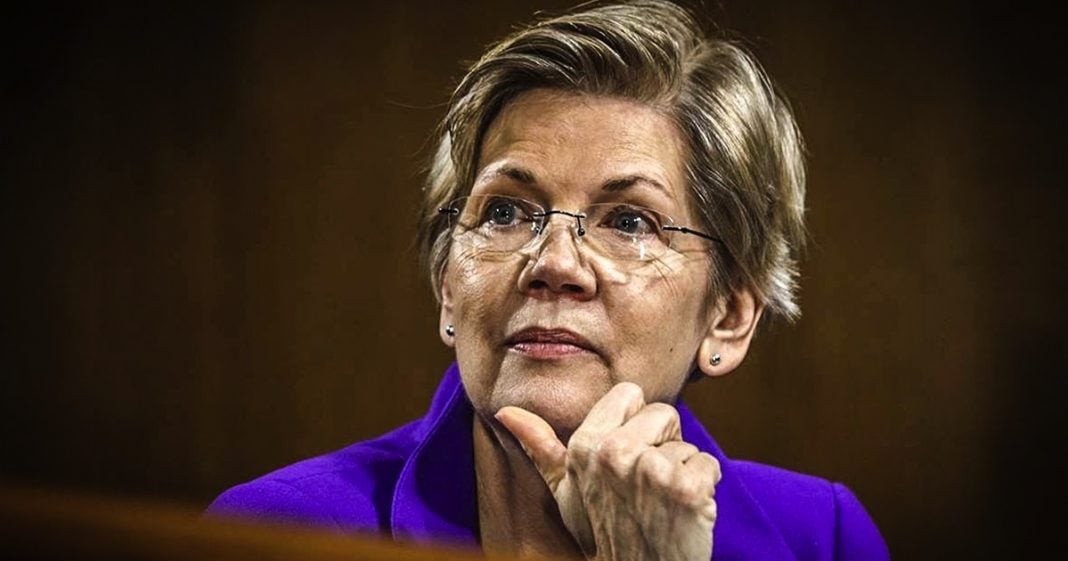 At the Netroots Nation 2017 convention this past weekend, Senator Elizabeth Warren said that the Democratic Party needs to stop with all the talk of “centrism” and they need to move back to the Left where they belong. This is refreshing coming Warren, whose progressive credentials were questioned by some after she endorsed Hillary Clinton in the 2016 election. But she appears to understand that change is needed and the best change is to embrace the true Left Wing of the Democratic Party. Ring of Fire’s Farron Cousins discusses this.

There were a lot of progressives who were upset when Senator Elizabeth Warren came out and endorsed Hillary Clinton in the 2016 presidential election, myself included. And I think in the past 12 months, Elizabeth Warren understands that that was probably a mistake. She’s seen what has happened in the Democratic Party since that election and even in the run up to that election. And she knows that that is not a sustainable path for the party. So this past weekend at Netroots Nations 2017, Elizabeth Warren gave a speech where she said if the Democratic Party wants to survive, if they want to win in the future, they have to reject their centrist policies and move further to the left.

According to Elizabeth Warren, what this means that you can no longer, as a party, be flippant about the woman’s right to choose. Now, recently, the Democratic Party announced that they were going to start finding pro-life candidates, because sure, why the hell not? Let’s just keep moving further to the right ’til there’s no difference between us and Republicans. Well, Elizabeth Warren and many, many other progressives and Democrats and liberals think that that is possibly one of the stupidest ideas that the Democratic Party’s ever come up with.

Another thing Elizabeth Warren said that the party not only has to push, but has to follow through on, medicare for all. Debt free college or trade school. Universal pre-kindergarten coverage. The list goes on and on, and she said in a direct jab to Bill Clinton and the Clinton era policies, “We cannot go back to the days of welfare reform and the crime bill, two things that plagued Hillary Clinton on the campaign trail both in ’08 and in 2016.” To put it bluntly, Elizabeth Warren understands what the Democratic Party needs to do if they want to remain relevant in American politics, and that is move further to the left and abandon the centrist policies.

And I know that’s going to piss off a lot of the establishment types, people like Eric [Boehlert 00:02:01], and Ian Millhiser over at Think Progress, and pretty much anyone at the Center for American Progress and Neera Tanden, but it’s the truth. And if you look at what’s happening with the Democratic Party right now, with this country, with the progressive votes. If you can look at all that and say, “Centrism is key,” then you don’t belong in American politics. That takes a special kind of stupid to look at this and say, “You know what? I’m willing to write off millions of voters just because I’m pissy that my candidate didn’t win in 2016.”

Because that’s what they’re doing. The establishment type are always going to vote Democrat, even if the party does move further to the left. If they stay in the center, the establishment will still vote Democrat, but you’ll lose the progressives. So you tell me, which one of those … You either get everybody to stay with you by moving to the left, or you keep only the establishment by staying in the center. Which one of those sounds like a smarter electoral plan, strategy? Because I’m going to go with the one that actually entices everyone versus the one that only caters to that centrist Democratic establishment that should have gotten out of American politics a decade ago.