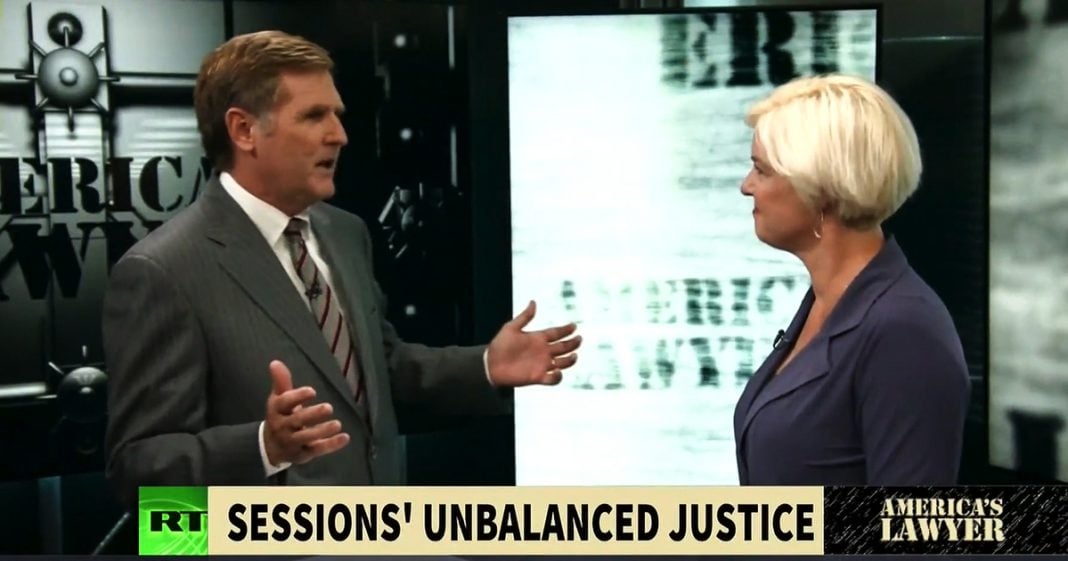 Via America’s Lawyer: Mike Papantonio is joined by Mollye Barrows, Legal Journalist for The Trial Lawyer Magazine, to talk about Jeff Sessions granting police officers the power to seize property of people only suspected of a crime.

Papantonio: U.S. Attorney General Jeff Sessions signed a new order encouraging law enforcement officers to use civil asset forfeiture more frequently. This is something officers use to seize a suspect’s property without even … no proof at all that they committed any crime. For more on this, I’m joined by Mollye Barrows, legal journalist at Trial Lawyer Magazine. Mollye, this is really hard to get your arms around, but they’re saying that it doesn’t make any difference whether you actually committed a crime; the very fact we found you around this maybe marijuana, we’re going to be able to take your car; cocaine, we’re going to take your entire house. That’s what this is about. The police officers get everything, even if there’s not a crime involved for that particular owner of that car or the particular owner of that property.

Mollye: That’s exactly right. In fact, the burden in the past has been on the owner of the property to prove that they weren’t involved in the crime if they wanted to get their property back. Well, Eric Holder, attorney general under President Obama, did away with this program about two years ago, put a stop to it, because there were concerns about abuse for a number of reasons, which we get into here in a minute. Jeff Sessions has decided to reinstate this pretty controversial program, and the point that he said … the reason that he wants to do it is to basically defund organized crime and start using that money that they take from these criminals to reinforce law enforcement, provide more support for victims, buy vehicles, bulletproof vests, that sort of thing.

Papantonio: He’s stealing from people that may not have even been involved in the crime. I mean, that’s all it is. When Eric Holder did away with this law — one of the few things that Eric Holder really accomplished I thought was noteworthy — he said, ‘Look, it’s the equivalent of somebody who owns a house, has nothing to do with the crime, doesn’t know about the crime, who loses their house in the process.’ Look, let me read you what Sessions said when he announced the intent of the order. He said, “With care and professionalism, we plan to develop policies to increase forfeitures. No criminal should be allowed to keep the proceeds of their crime. Adoptive forfeitures are appropriate as is sharing with our partners.” He’s saying that even with no criminal activity on the part of the people you’re taking the property from, it’s okay because we want to share with the police officers. I mean, did I get that right?

Mollye: No, that’s exactly what they want to do. They want to share with federal law enforcement. Essentially, the way that it works is state and local police departments can rely on the federal law in order … If they want to confiscate something under state law, they can keep it, but there are more strict guidelines. For example, 13 states now require that a conviction be in place before you basically confiscate somebody’s property, but if you confiscate it under the federal program, then you share 20% of what you take as a state or local law enforcement agency and you keep the rest because they have more permissive guidelines. That’s where Eric Holder saw the potential for abuse. Also, there were studies done, a number of studies, that showed that the majority of money being taken was valued at 10 grand or less, when the whole point of this program to begin with was to be a big slap in the face, a big punch in the gut, to the illegal drug trade, talking billions of dollars. They were trying to go after-

Mollye: … Scarface-type drug cartels. Instead, they’re hitting poor neighborhoods, low-time drug dealers, and raking in millions, $65 million in the year before Eric Holder did away with the program.

Papantonio: Another amazing story coming out of the Trump administration.