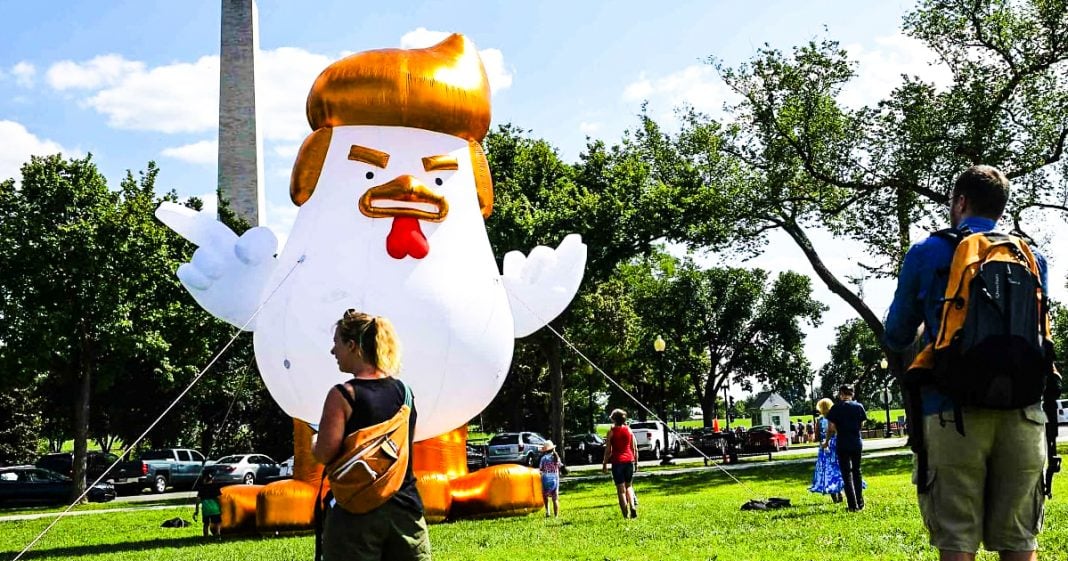 A 30-foot tall inflatable chicken sporting a hairdo similar to Donald Trump’s has been positioned opposite the White House in a form of protest. The chicken was the idea of a documentary filmmaker and it is meant to symbolize Trump’s weakness and overall ineptitude in office. Ring of Fire’s Farron Cousins discusses this.

Donald Trump might be in New Jersey, enjoying his alleged working vacation, but there is still a constant reminder in Washington DC that Donald Trump, is at least there in spirit. And that actually comes in the form of the 30 foot tall inflatable chicken with a Donald Trump hairdo. The chicken was placed across the street from the White House by Singh Brar, a documentary film maker. And he had actually purchased the chicken to use it as part of the tax day protest in Chicago. Cost him about 1500 dollars to buy it and insure it and the Secret Service actually gave him clearance. He got a permit to go ahead and stick this thing up in front of the White House.

And the reason he did this, is because he wanted to protest Donald Trump and use the chicken as an expression of Donald Trump’s weakness and overall ineptitude to serve as President of the United States. The only disappointing thing, he says, is he didn’t know Donald Trump was going to be on vacation this week, because he really wanted Donald Trump to be able to look out his window and see the giant Trump chicken staring back at him, as a reflection of what the majority of people in this country actually see the President as.

Now, this may seem silly, but it really is a good symbolic protest against the President of the United States. We know that Donald Trump has had big problems, with any kind of misrepresentation, any kind of mockery, any kind of person or someone or outlet or whatever, making fun of him. And that is exactly what this is about. It’s to show how thin skinned our President is. And this is the man that we’re trusting to keep us safe against countries like North Korea. A man who is probably in New Jersey right now, getting all riled up about a 30 foot inflatable chicken that has the same hairdo that he is. This is more than just a funny stunt by a film maker. This is about a statement about what most people in this country view the President as being.

And yes, that’s a giant chicken.