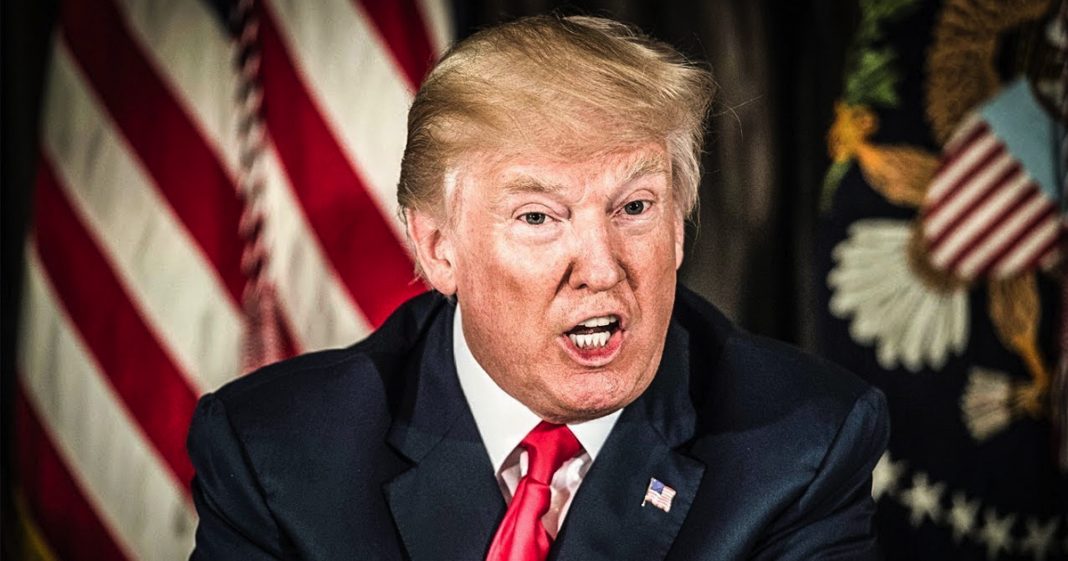 Tensions are heating up between the U.S. and North Korea, and Donald Trump appears to only want to escalate the situation. After warning North Korea that they would be met with “fire and fury” like the world has never seen, he took to Twitter to brag about the state of our nuclear weaponry. Trump desperately wants to launch a nuclear attack, and the results will have global ramifications for the U.S. Ring of Fire’s Farron Cousins discusses this.

Tensions between the US and North Korea seem to escalate this week, as North Korea revealed that they have a nuclear warhead to put on a regular missile that they can say reach the shores of the United States. In response to this, Donald Trump while at his golf resort in New Jersey, issued the following response to North Korea:

Donald Trump has absolutely no idea how to handle this specific situation, or really, anything regarding US foreign policy and how to deal with potentially hostile countries throughout the world. And this statement, you’re gonna be met with fire and fury like the world has never seen, just further proves that. But after he made that statement, and I guess he got a good night’s sleep, woke up early Wednesday morning, August 9th, and tweeted the following.

He said,“My first order as President was to renovate and modernize our nuclear arsenal. It is now far stronger and more powerful than ever before. Hopefully we will never have to use this power, but there will never be a time that we are not the most powerful nation in the world.”

Now, the significance of that date, August 9th, that Donald Trump tweeted this out after escalation with North Korea is important. Because on August 9th, 1945 the United States dropped the Fat Man atomic bomb on Nagasaki. I don’t feel like it’s any kind of real coincidence that Donald Trump would end up bragging about the modernization and strength of the US nuclear arsenal on that specific day. Not for nothing, it’s also the anniversary of the day that Richard Nixon resigned from the office of the presidency.

Nonetheless, there are several problems with Donald Trump’s statement. First of all, it’s an absolute lie. Barack Obama who put into action the plan to modernize and update the US’s nuclear arsenal. Second of all, it was not Donald Trump’s first order of business, again, Obama did that. Trump’s first order of business was some kind of executive order regarding healthcare. And third, it’s not even close to being done. According to all experts, it’s going to take decades before we actually modernize and renovate and update the US’s nuclear arsenal.

But to go out there and act like we’re some big bad superpower and nobody’s ever gonna be better than us, bigger than us, or stronger than us, shows how weak we are. If you feel the need to go out and constantly remind everybody how strong you are, then you’re not really a strong person or a strong country. A strong country doesn’t have to say anything, because people understand it.

Kim Jong-un over in North Korea understands that Donald Trump has made the United States weaker. He is not threatened or intimidated by Donald Trump. In fact, it appears that he enjoys playing games with him, because military experts and other world leaders are saying that Kim Jong-un was simply trolling Donald Trump, and Trump fell for it, hook line and sinker.

When Kim Jong-un said that they were thinking about possibly launching a missile, one of these nuclear missiles, I guess, over to Guam, which is a United States territory, the leader of Guam said we’re not worried about this at all. Earlier yesterday morning, August 8th, Trump’s own top military advisers told him North Korea’s really not a threat at all to the United States. Yet, Donald Trump couldn’t stop himself from responding to this madman overseas and trying to act even crazier than he is.

Donald Trump desperately wants to launch a nuclear attack against somebody and that much is becoming obvious. His words are very clear. He is trying to show the world that yeah, we’ve got nukes and we aren’t afraid to use them. And if he orders that launch, if he orders that strike, which would have to have the approval of Congress, by the way, there are going to be ramifications for the United States, not just from North Korea but the rest of the world. If we launch another nuclear strike against another country, like we did 72 years ago today, it’s not gonna end well for the United States.