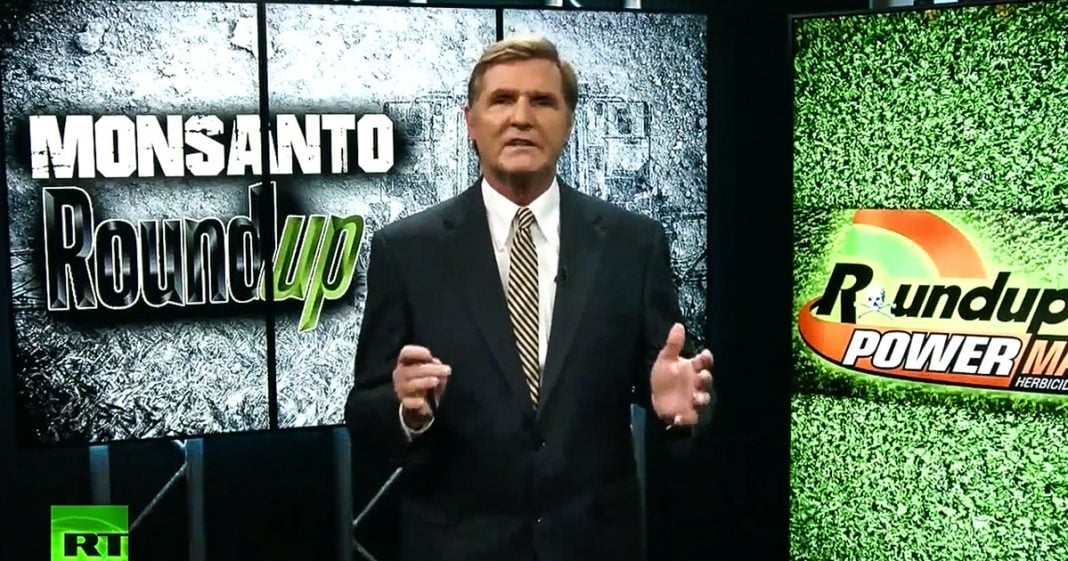 From America’s Lawyer on RT America: Mike Papantonio discusses the dangers and lawsuits that surround Monsanto’s RoundUp. Attorney Robin Greenwald joins Mike to talk about how the main ingredient in RoundUp, glyphosate, is linked to causing cancer.

Mike: Environmental lawyers have begun filing lawsuits against Monsanto for cancer deaths related to their product Roundup. What these lawsuits are showing is an effort, both on the part of Monsanto and the US government to minimize the message about the dangers of Roundup in relationship to human cancer. The story begins as early as the 1980’s when laboratory tests on glyphosate, again, show cellular changes in laboratory animals that should have been considered early signs of a relationship to cancer.

In fact, in 1985, the EPA, during a time when it was actually effective, a time when it actually worked on behalf of a safe environment, they determined that glyphosate, the primary ingredient of Roundup, needed to be classified as a class C carcinogen, which meant that it clearly was suggestive of a relationship to cancer. But then miraculously six years later, the EPA suddenly changed that classification to something just the opposite where they claimed that “No, they were wrong”, and overnight glyphosate, according to the EPA and Monsanto, the public has no worries. Nothing to worry about here. Just move on.

All of the laboratory testing from the early 80’s that the EPA used to classify glyphosate as a cancer agent, suddenly becomes unavailable to the public, unavailable to doctors, and Monsanto argues that all of that early testing falls under the protection of trade secrets, so it can’t shared with anyone. The next twist takes place, the World Health Organization issues a statement in 2015 maintaining that glyphosate in Monsanto Roundup, in their words, is probably a human carcinogen. As you might imagine, Monsanto called in its army of paid scientists and lobbyists and politicians needing contributions and governmental agencies more concerned with mega profits than human health.

With government corporate controlled media and the White House pulling every string to protect Monsanto, it appears that the only place this story’s gonna be fully told is in court rooms in front of juries. One of the lawyers handling the Monsanto Roundup case is an attorney called Robin Greenwald. You’ve heard that name because she’s one of the finest environmental attorneys in the country. Robin, thanks for coming to the show.

Robin: Hi Mike. Thank you for having me.

Mike: In the lawsuits that you’ve brought, Robin, have you made part of your claim that Roundup, it’s primarily made up of glyphosate, they failed to warn users about the connection between that and cancer in this product. Do they provide a warning about that that the World Health Organization said should be provided?

Mike: Robin, give us kind of a rundown-

Robin: And there is no warming.

Mike: On what you’ve alleged in your lawsuits against Monsanto in regard to Roundup. The history, the knowledge, the possibilities then to fix this problem. Tell us what your lawsuit’s about.

Robin: Sure. The saga, as you mentioned at the beginning started really when Roundup was being registered through the EPA FIFRA program, the registration process, and companies at that time have to give certain data to the government to show that their product is either safe or that it’s not safe and needs certain protections, and so that’s part of the registration process and it’s public record that two of the laboratories that Monsanto used to supply information to the federal EPA both provided false data and both of those laboratories, one was IBT in the 1980’s and then Craven Laboratories in the 1990’s, they both were investigated, prosecuted, and convicted by the Department of Justice for providing false data in connection with Roundup and other chemicals for that matter.

There’s a sort of sorted past in some respects and all of this outlined in the complaint and as you mentioned in your lead up, the EPA originally classified Roundup as a glyphosate, I should say, as a class C and then it changed the registration to E, which is non-carcinogen. But it’s important to note that when EPA did that-

Mike: Yeah. I want to ask you about. What changed, Robin? I mean, how do you go overnight, one day, “Yeah, we think it can cause cancer”, the next day, “Don’t worry about it, public. Don’t worry about it, doctors. There’s no problem here.” How did that happen in your estimation as you’ve looked at this material?

Robin: We’re still uncovering a lot of that information now but even when EPA changed the classification from C to E, it said specifically, “Our finding, our change from C to E does not mean that glyphosate is a non-carcinogen”. And so I believe that the government looked at different data, other data, new data. Unfortunately, these things happen when registration occurs and there’s a certain classification, companies that are registering products can give new information to the government. Different people look at different information. Unfortunately, from time to time it is a moving set of facts. And certainly here, something happened within the process to change it.

Robin: I don’t agree with that. I think that any data, any scientific research that’s submitted to EPA should be available to the public but it’s not. We all know that the law, our system, our regulatory system allows companies to submit scientific data to the government under what’s called CBI, confidential business information, and when it has that stamp, the government does not give it to the public at large. Query why Monsanto doesn’t want to share those studies with the public.

If Roundup and glyphosate are so safe, then those documents and those studies should be documents that they would want to share with the public, but unfortunately that’s not what’s happened here and as we know, there are documents that are stamped confidential that the public doesn’t get to see.

Mike: Robin, how extensively has Roundup been used throughout the world and what is your concern, if any, about how it’s affected our food supply. If we’ve got this used pole to pole and all of a sudden we find out it does cause cancer, how does it affect the food supply? Is that something that you’re gonna be talking about in your trial?

Robin: Roundup is the number one used herbicide in the world, glyphosate. Monsanto had a patent on Roundup until 2000 and then what it did in 2000 is it developed something called Roundup Ready Seeds because it was losing the patent in the United States and all of this is alleged in our complaint. In 2000 recognizing they were gonna lose the patent, they developed this Roundup Ready Seed, so the farmers who use Roundup Ready Seeds, when they lost the patent they would still have to use Monsanto’s Roundup because that was the only herbicide that would be effective on those genetically modified seeds. It is the world’s most used herbicide and I believe it remains that today.

Our lawsuit, Mike, is focused on exposure to Roundup through application, so maybe the food case will come next, but right now our focus is on people who use Roundup in the application process so those would be landscapers, farm workers, farmers, individuals who use it for home use and it’s really dermal exposure and inhalation in the process of exposure and that was the focus in large measure of the World Health Organization as well.

Mike: Robin, are you seeing a large number of cases right now as you’re screening these cases, as they’re calling you, they would call you because you really are one of the foremost experts on this in the country right now. As they call you are you seeing numbers increase?

Robin: There are definitely, definitely increasing numbers. I think as people learn about it … For so many decades Roundup was used and nobody thought anything about it. People believed the label that it was safe. So often we’ll get a call from someone and say, “I used it for 15-20 years and I never thought anything about it and I was reading an article or I was on Google and I saw that it can cause non-Hodgkin’s lymphoma and I’ve 40 years old. I have no history of cancer in my family and I was diagnosed with stage four non-Hodgkin’s lymphoma two years ago and I’m still going through treatment. Do you think it’s from Roundup?” We get those calls often.

Mike: I see both democratic and republican senators, congressmen jumping behind to support Monsanto even though they’re seeing the same material that you’re looking at. How has this become such a political issue protecting Monsanto?

Robin: Monsanto’s a huge corporation. It has a large swath of lobbyists and people who push hard to keep the product in the marketplace. Let’s remember it is a huge part of Monsanto’s profit center. It is something that they will fight hard to keep on the market.

Mike: Lawsuits have been filed-

Robin: You know, Mike, something-

Mike: Nationally, Robin … Go ahead. No, go ahead, please.

Robin: I was gonna say, something interesting that I sort, of a little-hidden fact in the complaint is in 1996 the New York Attorney General’s office actually sued Monsanto over Roundup, finding their advertising to be false and deceptive in the state of New York and the two lines in particular that the state of New York sued Monsanto under was one line was called “safer than table salt” and the other one was “practically non-toxic”.

Robin: Those were the two advertisements they used throughout the state of New York and they stopped doing that in New York. I’m sorry.

Mike: Let me a do another story on this in the future. Thank you for joining me, Robin Greenwald.