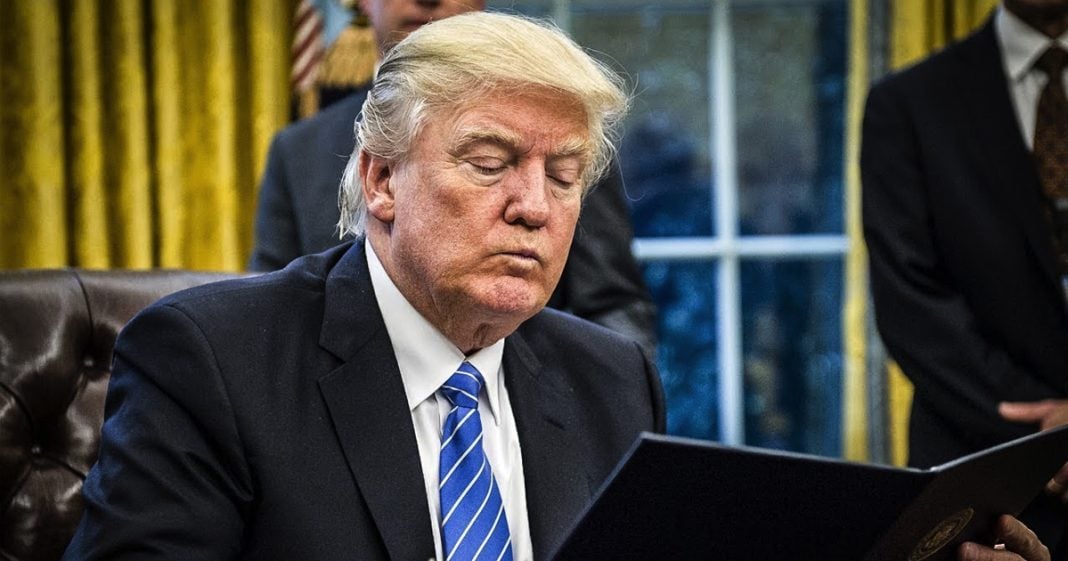 According to reports, President Trump is paying a staffer $89,000 a year to do nothing more than scour the internet looking for positive stories about Donald Trump. The staffer then hands these stories over to Trump each day. This is a taxpayer-funded position that only serves to feed Trump’s fragile ego. Ring of Fire’s Farron Cousins discusses this.

Since his very first day in office, Donald Trump has done nothing more than complaining about the alleged fake news media in the United States. It should come as no surprise that a new report by Politico tells us that Donald Trump is actually paying a staffer $89,000 a year, and that’s money that’s coming from the taxpayers by the way. This kid is getting paid $89,000 a year to do nothing other than scour the Internet, find positive stories about Donald Trump, and then each day hand Donald Trump a portfolio containing those positive stories.

The only purpose of this is to boost Donald Trump’s fragile ego, to let him know there are still some outlets out there, bloggers and Fox News, I’m assuming, who still think highly of the president and are willing to report and print out basically complete BS so that the president can feel better, because at this point that’s all it’s about.

This is no longer an issue of liberal media versus conservative media. It’s the truth versus fiction. There is nothing positive to report about Donald Trump, and yet there are still outlets out there spilling positive stories about Donald Trump, which are completely based again in fiction, in an alternate reality, a reality in which Donald Trump has put all of his stock into. And so we are paying $89,000 a year for a 31-year-old named Andy Hemming to scour the Internet, find these stories, print them out and say, “Here good leader, here are your positive stories of the day. I hope this boosts your ego in the way that you’re wanting it to. I hope you sleep better at night knowing that there are just a few people in this country who actually like you.”

This is the kind of behavior that if we were to learn it was happening say in North Korea, we would laugh at them. We would mock them, and we would talk about how horrible it is that they have human beings doing this whose sole purpose in life at this moment is to make somebody else feel better about their horrible decisions that they make on a daily basis, because that is what Andy Hemming is doing. He’s doing it with our tax dollars, $89,000 a year. How do you even get that job? Where did they post that job opening? “Hey, do you like to give people false information to make him feel better? Apply today!”

None of this makes any sense, but we’ve come to expect that from the Trump administration. This story is not surprising whatsoever. The only thing that is surprising is that there’s only one person doing it and not a whole team of people who have to put together this week, daily, excuse me, propaganda briefing for the president just because his ego is so fragile, because he’s so damn narcissistic that he can’t be confronted with anything that might be construed as the truth.

They have to feed him those alternative facts every day, and that’s probably one of the reasons why he continues to go out there and lie to the public about how much everybody loves him. Because when you only focus on one small part of the media, the part of the media that has a real problem telling the truth, then yeah, you’re probably going to go spread those lies to everybody else, because that’s the only thing you’ve exposed yourself to.