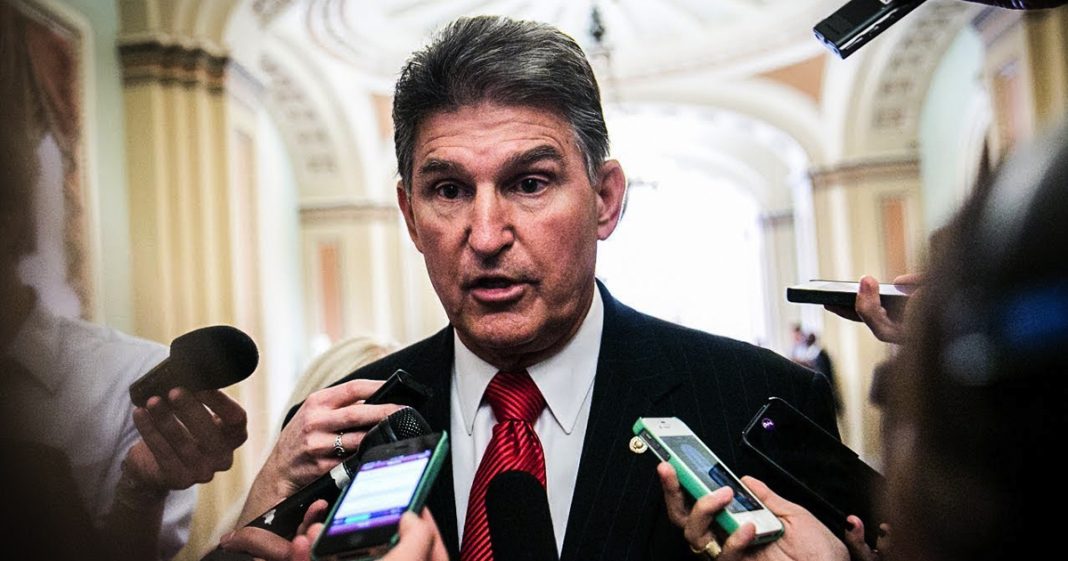 Corporate Democrat Joe Manchin embodies everything that is wrong with the Democratic Party, and at this point he appears to have stopped caring about that fact. In a recent interview with a reporter, Manchin exclaimed that he doesn’t “Give a shit” about his reelection and he isn’t going to bow down to Progressives just so he can win. Ring of Fire’s Farron Cousins discusses this.

Democratic senator Joe Manchin from West Virginia represents everything that is absolutely wrong with the Democratic Party today. However, that didn’t stop them back in January from putting him in a leadership post among Senate Democrats, which really shows that they learned nothing from the 2016 election, and they’re still more than happy to push corporatist and push corporate Democrats into positions of leadership. Recently, Joe Manchin gave an interview to the Charleston Gazette Mail where he kind of laid out that he doesn’t care that people want him to be a true Democrat or, god forbid, go a little bit more on the progressive side.

Here is what Joe Manchin said during that interview.

That is Senator Joe Manchin’s response to people wanting him to be a little bit more progressive. If you’re going to call yourself a Democrat, hell, at least follow what the rest of the Democrats are doing. His response is, “I don’t give a shit. You’re crazy.” I don’t think it’s everybody else that’s crazy here, Joe Manchin. Manchin went on to say, “My votes are based on if it’s good for West Virginia or not, and that’s it.” Okay. Fair enough. You represent West Virginia in the Senate, but not every piece of legislation that comes before you impacts West Virginia. Sometimes, as a US senator, you also have to vote on things that might help the rest of the country too, buddy. That’s what being a leader is all about.

Furthermore, you have consistently voted against environmental protections that directly affect the citizens of your state, all because you want to protect these dying coal jobs that are going away, having nothing to do with climate change whatsoever. It’s supply and demand that’s killing the coal industry, but you think it’s environmental protections, so you vote against the public health and safety of your own citizens, allow them to be poisoned with CO2 emissions and coal ash spills, and do nothing about it, nothing to hold those companies accountable, because you’re getting tons of money from the coal industry.

Again, Joe Manchin is what’s wrong with the Democratic Party, and he is not the only one. You’ve got a dozen other little Joe Manchins running around out there taking money from corporations, voting against the platform of the Democratic Party, voting against the will of the people, and that is what the Democrats are still trying to push down our throats as they’re already gearing up for the 2020 presidential campaign. They tell us that we need to just chill out, relax, everybody takes money from corporations, so we should just accept it, because you can’t win campaign, you can’t even run a campaign without corporate donations. Go ahead with that mentality and see how that plays out for you in the 2018 midterms and the 2020 presidential elections, because for a party that seems to hate Donald Trump so damn much, they’re really not doing a whole hell of a lot to ensure that they beat him if he’s up for reelection in 2020.