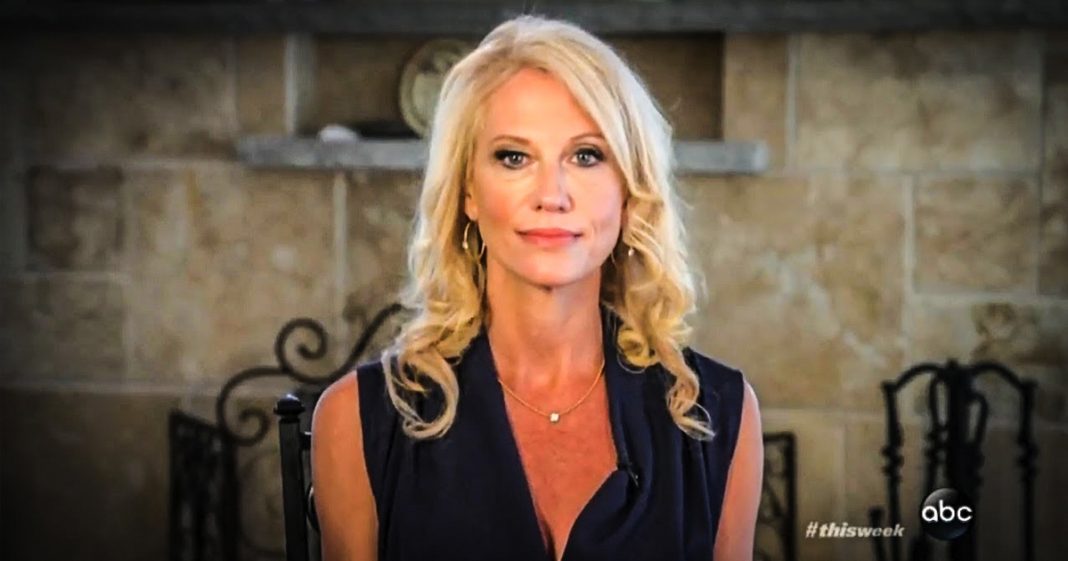 During an interview with ABC’s This Week on Sunday, White House counselor Kellyanne Conway managed to somehow defend the Trump administration’s scandals by bringing up the Republican Party’s favorite boogeyman – Benghazi! She has become increasingly unhinged as she attempts to defend her corrupt boss, and her lies have very real consequences for the American public. Ring of Fire’s Farron Cousins discusses this.

Well ladies and gentlemen it’s Monday and that means we have a new round of stupid things that Kellyanne Conway said on the Sunday talk shows. As usual, Kellyanne Conway appeared on ABC’s This Week with George Stephanopoulos and when she was asked about the ongoing investigation of potential collusion between the Donald Trump campaign and people from Russia, this was her response.

Kellyanne: The president weighed in as a father, he did not dictate the statement.

George: But first the White House and the president’s lawyers said he wasn’t involved at all, they didn’t tell the truth.

Kellyanne: George you know, I know there’s this whole thing about everybody wants to take this task.

George: By telling the truth.

Kellyanne: No, no that is the subject.

George: You’re going back to President Obama and Hillary Clinton, right there I said direct.

Kellyanne: Those were big lies.

That’s right folks, colluding with a foreign power in order to gain information on your political opponent because that foreign power wants your candidate to win doesn’t matter because Benghazi. That’s her explanation. Because President Obama said if you like your plan you can keep your plan, which for 99% of the country turned out to be true, that it doesn’t matter that Donald Trump possibly colluded with foreign superpowers.

It’s getting harder and harder to even attempt and follow Kellyanne Conway’s trail of logic because there is no logic. There is no reason. There is no real thought process going on inside of that woman’s head. Every week she is coming out and becoming increasingly more unhinged in her responses. She understands though that the Republican base loves that word Benghazi. That’s all it takes to get a Republican fired up.

It’s like a dog when you say, “Do you want a treat? Do you want to go for a walk?” And the dog starts going crazy. That is what Republican voters do when you mention the word Benghazi. Oh Benghazi. And she knows that and that’s all they have folks. We had hours upon hours upon hours upon hours, millions of dollars wasted into an investigation. Hillary Clinton actually did come and testify again for hours and they found nothing. The FBI had nothing, the CIA had nothing, Republicans had nothing. I am no fan of Hillary Clinton by any means folks but Benghazi is done. We did our due diligence there, let’s move on.

But Kellyanne Conway that is the last bone that she had to throw to the Republican base of idiotic voters here and so that’s what she’s doing. She obviously can’t defend the President’s actions or his family’s actions during the campaign so she has to try and change the subject. My advice to George Stephanopoulos and his producers, please stop having her on TV. You know she’s not going to say anything intelligent, you know she’s not going to add anything of context to the conversation there, so just let her go. Let’s let Kellyanne Conway start taking her Sundays off. Maybe she can go to church. Maybe she can go to the beach. I don’t care what she does. Just stop putting her on TV.