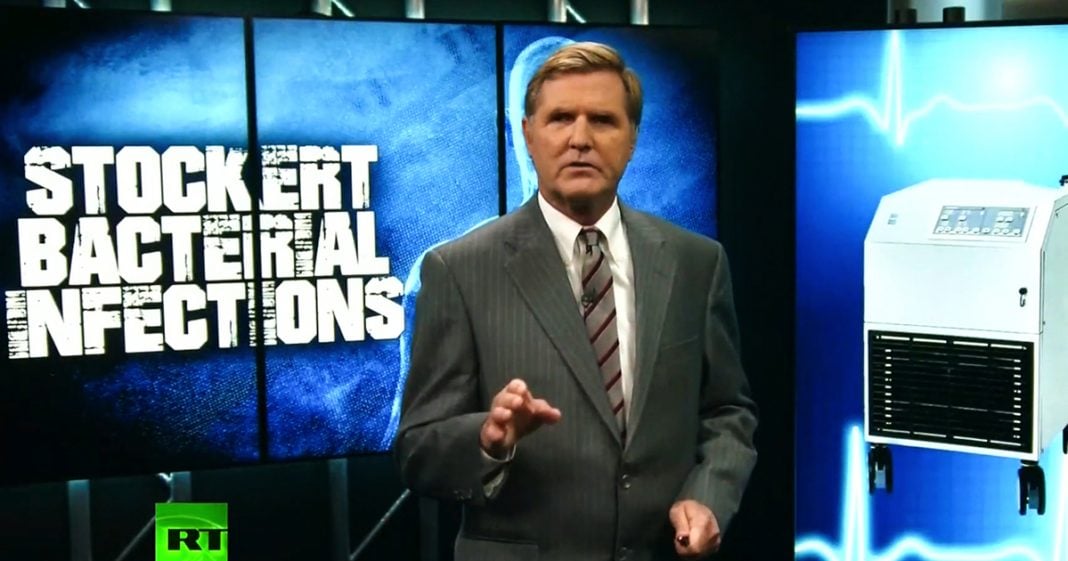 Via America’s Lawyer: Mike Papantonio discusses a medical device used in heart surgeries called the Stockert 3T Heater-Cooler that is causing infections in patients and speaks with attorney, Kim Adams, about the details of the case.

Papantonio: When patients go in for any kind of heart surgery, they know that they are undertaking huge risks. But these are risks that the patients know are necessary in order to survive. Sadly, a company called LivaNova has caused an unnecessary increase in risks for heart surgery patients by supplying American hospitals with a medical device that is packed with bacteria. This device is called the Stockert 3T Heater-Cooler.

This heater-cooler device is absolutely essential when a patient undergoes a heart surgery. Whether you’re having a valve replaced, an entire heart transplant, or a bypass surgery, this device is what is circulating your blood, heating it and cooling it outside of your body, and keeping you alive during this procedure.

The Stockert 3T Heater-Cooler is used in 60% of heart surgeries in the United States, so the odds are that if you’ve had an open-heart surgery, you would have this device has been involved. What we’re learning now – and what the FDA’s been investigating for years – is that these devices may have what is called a biofilm. It’s a bacteria inside of them that is actually being emitted and spewed out into the surgical field, getting in people’s open chest wounds during the surgery and causing devastating injuries and deaths in some cases.

LivaNova manufactured these Stockert 3T devices at their lab in Europe. And in those labs, there was a bacteria called NTM. It’s a very rare form of bacteria to cause an infection, but it is everywhere in the environment. And patients who are exposed to NTM during open-heart surgery can develop symptoms that can take months to recognize — which means diagnosing and treating this infection is very difficult.

What happens with the Stockert 3T device is that the water tank controlling the patient’s blood temperature becomes contaminated with this very specific type of NTM bacteria from the manufacturing plant. When it showed up in hospitals in America and throughout the world, doctors didn’t know, surgeons didn’t know, and hospitals didn’t know that there was already this bacterial contamination.

But when these devices were turned on during open-heart surgeries, patients became infected. And as usual the FDA was dragging their feet in controlling the problem.

For more on the dangers of Stockert 3T devices, I’m joined now by attorney Kim Adams. Kim, start by telling us exactly how these devices are used during surgeries. Why are they necessary?

Kim: Well, they’re necessary as you alluded to earlier, to keep the blood, circulating blood, at a specific temperature during these six hour plus surgeries. So, it’s a blanket, these devices are attached to a blanket, that sort of helps warm and cool the person, the patient’s circulating blood.

Papantonio: Well, what’s the dangers of these devices? I mean, the bacteria, but the real danger is that people don’t know about this. Isn’t that part of the problem?

Kim: Sure, the real danger, there’s a lot of real dangers, but the real danger for why these patients are susceptible. A, they have an open wound, many of them have lower immunity systems, so you have this bacteria that’s transmitting into the operating room area up to six hours or more directly into these patients’ wound.

So, you’ve got those issues, plus you’ve got the delay. This is a slow-growing bacteria that can take years to actually surface, sometimes it’s masked, and sometimes it’s … And we can get into that a little bit more, but sometimes these patients don’t know, they’re not symptomatic, or if they are symptomatic, doctors might think it’s a respiratory illness and treat it with some run-of-the-mill antibiotic.

Papantonio: Well, from what we know right now Kim, was the company aware that their devices were loaded with this bacteria?

You can’t get rid of this bacteria in these particular devices.

Papantonio: Talk about that just a little bit. Okay, the surgery’s complete, the patient goes home, when might this bacteria problem manifest itself for patients, is it months, weeks, years, when might it manifest and what type of problems occur when it does manifest itself?

Kim: Right. Okay, so, it can be weeks, it can be potentially days, but normally it’s a slow-growing bacteria, so it’s going to take weeks to manifest itself. You’re going to have night sweats, you may be symptomatic. It could take years, we’ve got some callers and some cases and some of our clients who were exposed in 2011 and didn’t surface the actual diagnosis of NTM until 2016, 2017.

So you can have up to five years is what we have documented, knowledge about this infection coming forward. So, but like I mentioned before, it takes eight weeks to grow this particular bacteria sometimes. And so doctors might be treating it with an antibiotic that they think is going to treat respiratory symptoms, and so even those particular cultures, when they grow negative, may not be negative. It may have just been suppressed by these respiratory type antibiotics if you will.

Papantonio: Kim, if this is so common in the environment, can you tell us why it’s such a problem? If it’s everywhere, if it’s a ubiquitous bacteria, why is it such a problem in this setting?

Kim: Well, I think that part of the problem is that you’ve got open wounds and it’s not just an open wound, like an open cut on your foot, this is a person’s chest that’s opened up, you’ve got these bacteria transmitting in the air for up to six hours or more. And it’s not just a little bit of bacteria, this is a constant ventilation where it’s continuously flowing through the operating room.

And then you have patients who may be and have immune systems that just are not up to par. If it’s you or I or someone that’s not got an immune issue, they may be able to battle these types of infections, but for this particular patient population, it’s devastating to them.

Is that … That’s kind of the way I see this at this point, is that about right?

Kim: Well, true. Doctors, now that we are having some idea that this is actually happening can actually test particular, or do particular tests to find this type of infection. But before all this sort of thing surfaced, doctors didn’t even know to run this type of blood test. This is an eight week blood test, it’s a very specific blood test. So doctors didn’t know what they were treating, necessarily. They would have to go through a process of elimination.

Papantonio: It looks like the FDA has done it again, they’re asleep at the wheel. They haven’t done their job. They’ve known about this for several years, they allowed it to go on without taking any action, what is your take on the FDA’s deplorable conduct on this one?

Kim: It is unfortunate, again, that we have at least from the European notice of these things happening in August of 2014, the FDA took a year or so to actually make comments and tell the manufacturer, give them a slap on the hand, ‘Hey, your manufacturing processes are not up to snuff, get it together.’

But it’s not until 2016 or later that they actually start letting hospital staff, hospitals, and potentially patients know that this is something that’s very serious, you need to look at.

And what’s even worse is that they were advising people along the way, try to mitigate the exposure by cleaning these devices. But what we now know is you can’t clean this bacteria out of these devices. So, finally the FDA has come around, and has issued some more strength to the idea that they’re telling hospitals, ‘Unless it’s a life-threatening situation, do not use this device, remove it at all costs if you can and have the understanding that this is the potential exposure you’re giving your patient if you have this particular device on hand for that procedure.’

Papantonio: Let me circle back out on something. You said you can’t actually fix this problem by cleaning the device, did I get that right?

Kim: Correct, our allegations are that you cannot clean this bacteria out of this device. It’s in the tubes, it’s in the ventilation systems, it’s in the exhaust systems.

So from what we see, you cannot just flush, because a lot of the manufacturers’ standard procedure for this particular device is, ‘Flush it, clean it, sanitize it,’ but what we’re … And you should do that, in an operating room, doctors, hospitals know they need to clean and have a sterile environment. The problem with this, you can’t make this sterile. And so although these years, you’re trying to tell them, ‘Make this sterile,’ they can’t do that.

Papantonio: Yeah, so, real quickly, how did the company react when the FDA warned them, you gotta fix the problem? Of course, I’m not letting the FDA off at all, the FDA needed to take strident actions to do something. But as usual, they didn’t.

Kim: Well, they’re still being used. They’re still across the country. I think a lot of hospitals have finally decided not to use them, but the proof’s going to be in the pudding. Have they corrected their manufacturing processes? Likely no. They’re still fighting. We got rulings just yesterday I think that LivaNova does not want to be a participant in this litigation, they don’t think that they should be a participant in this litigation.

So they’re not taking responsibility. It’s the same song and dance with these large manufacturers. They’re not taking responsibilities for a device they know was manufactured under poor conditions. The FDA, yes unfortunately drug their feet. And so now we have this patient population … That’s a 150,000 cardiac patients with that 60% a year for the last four or five years that have been exposed to this.

Papantonio: Kim, I hope you’ll stay on top of this. This is another incredible story of corporate America and the FDA regulators not doing their job. The government sits by and sleeps as these types of things happen.