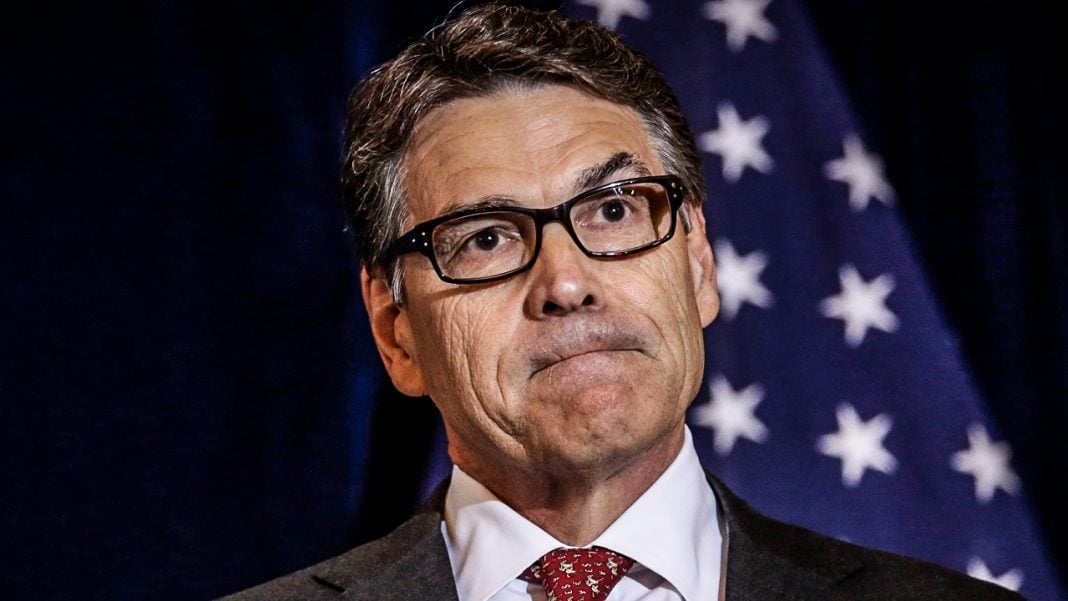 According to Interior Secretary Ryan Zinke, he and other officials in the Trump administration frequently “laugh a lot” about the fact that Energy Secretary Rick Perry didn’t understand what his job actually was when he signed on with the Trump administration. While Zinke admitted that he and Perry had become good friends, they still poke fun at the former Texas Governor for not being very bright. Ring of Fire’s Farron Cousins discusses this.

Secretary of the Interior Ryan Zinke gave an interview to GQ recently, where he admitted that he and other officials within the Trump administration laugh a lot about the fact that Rick Perry is so damn stupid. Now, specifically Ryan Zinke says that he and other folks of the administration laugh about the fact that Rick Perry did not know that as the Secretary of the Department of Energy, he was in charge of the country’s nuclear arsenal. In fact, Rick Perry actually thought the job of Department of Energy, was the job the job of Department of Interior, and he just got it all confused.

He also seems to have forgotten the fact that just a few years ago he actually called for the complete abolition of the Department of Energy, which is the department that he is now running. So, Zinke says that even though he’s good friends with Perry now, that they basically work together, he still likes to poke a lot of fun at him for not understanding what his job was and being a big ol’ doofus sometimes.

Meanwhile, the rest of the country, the people who have to live with the decision that these idiots make, we’re not laughing. We don’t find it funny. We don’t find it humorous. We don’t see any joy in the fact that a complete moron like Rick Perry, is serving as the head of the Department of Energy in charge of our nuclear weapons. That doesn’t make any of us in this country sleep better at night. It’s not a joke we go around telling our friends.

A few years ago, if we had said that, we absolutely would’ve thought it was a joke, because we didn’t think this country would ever devolve to the point where we would allow somebody like Rick Perry to be in charge of really anything other than the state of Texas. But that’s the sad reality that the rest of us live in today. So, go ahead laugh it up. Laugh about the fact that the guy who runs the nuke department doesn’t understand that. Doesn’t probably even know where they are. While the rest of us worry. The rest of us have to show our children what’s happening in the administration, and explain to them why this is not normal. So, go ahead. Keep laughing, and hopefully someday soon we’ll be the ones laughing as the impeachment papers come out. And your entire administration goes down in flames.