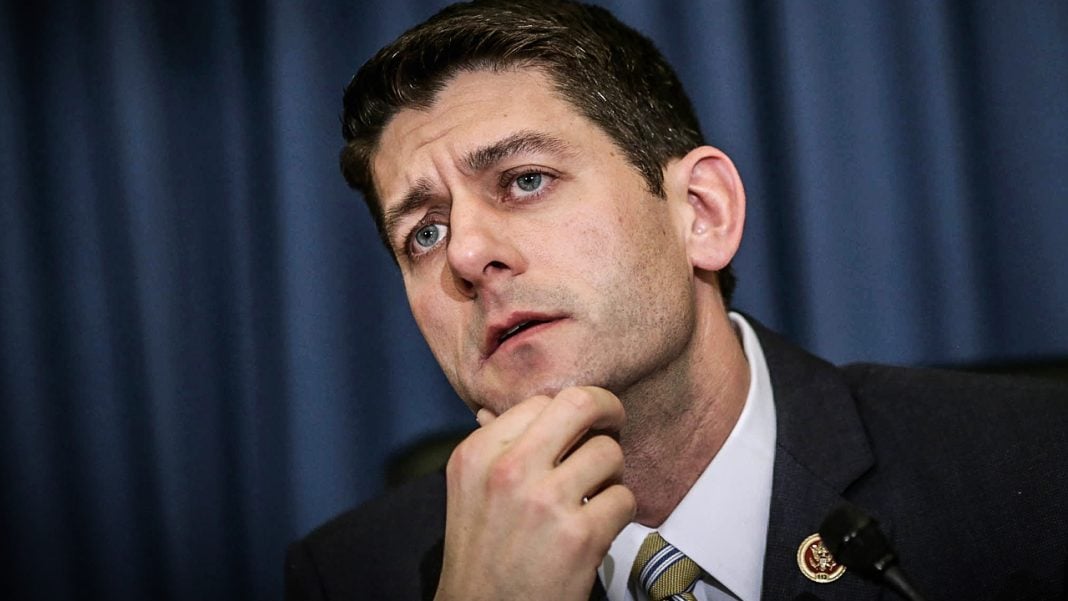 After Republicans in Washington, D.C. spent close to 400 hours this year trying, and failing, to repeal the Affordable Care Act, House Speaker Paul Ryan promised that he would “stick the landing” on his tax reform package that will hand billions of dollars over to the top 1% of income earners. We stopped their healthcare disaster from happening, so let’s stop this idiotic tax reform plan, too. Ring of Fire’s Farron Cousins discusses this.

In a recent interview on Fox Business Channel, House Speaker Paul Ryan promised that those failures with the healthcare legislation on the Republican side, the failure of the Senate, the multiple attempts by the House that now ultimately mean nothing, the almost 400 hours that Republicans spent so far this year trying to repeal the Affordable Care Act, if anything, it’s only made people like Paul Ryan stronger. That’s what he wants us to think, because during this interview with Maria Bartiromo, he said that, look, we had these failures and so on; I’m going to double down and I’m going to stick the landing, were his words, on tax reform. You see, Paul Ryan at this first part of this year did nothing other than tweet about the fact that we had to repeal Obamacare; we had to pass a new healthcare law. As soon as he saw that that particular law was doomed about a month or two ago, he started nonstop tweeting about reforming the tax code in the United States. That is his new single issue that he’s working on, but it’s not just tax reform.

Now, I know he says in his tweets he wants to make things simpler for small businesses, for people; this tax code is too complicated. I’m sure to a guy like you, Paul Ryan, it is very complicated. You don’t seem to understand things very well. To average Americans who go and file their taxes every year, pretty easy process, pretty painless. If you can’t personally do it, you can pay somebody to do it for you. They really actually don’t cost that much. I don’t see what’s so complicated about that, but Paul Ryan apparently sees something I don’t. You know what he sees? He sees the opportunity to once again hand billions of dollars over to the top 1%, the millionaires and billionaires of this country making more than $3.7 million a year. He wants to hand them huge, massive tax breaks to the tune of about $1 million a year while the average working-class family is going to get about $40 per year out of this Paul Ryan tax cut plan.

The scary thing is … he always says he’s going to stick the landing … he absolutely will because while Republicans may have been divided on the healthcare issue, they’re united in wanting to cut taxes for their donor class. They always have been; they always will, even though it is proven every single time it’s happened that it crashes the economy, that it leads us into a recession, every single time without fail. That’s what Republicans want to head us back into. Why? Because they want to give rich people a little bit more money.

Republican voters, those who are going to get screwed over by the deal, they actually go out there and defend it and say, “Why not? Those are the job creators. They should pay lower taxes. Why not? They’re paying a ton of money into taxes anyway. We should cut those taxes.” Bullshit. You know what we should cut? We should but entitlement programs to millionaires and billionaires, because that’s what this is. Let’s start calling it that. This isn’t tax reform. This is subsidizing the wealthy.

If you’re okay with your tax dollars going to somebody who owns several different mansions and maybe has a private jet, then cut out the middle man and just start writing them a check every month if you’re so comfortable with it. The rest of us want to see our tax dollars going towards the needy, going towards fixing roads, going towards paying teachers more. Did you know that we subsidize and we give tax breaks for the wealthy elite when they buy private jets? There is a specific little loophole for buying a private jet that lets them fork over some of the cost onto the rest of the taxpayers. That’s the kind of stuff we have to stop, but that is the kind of thing that Paul Ryan wants to extend.

I will never in my life be able to buy a private jet, and I’m fine with that. Most Americans won’t be able to do that, and I don’t think a lot of us really care, so why should we be subsidizing the private jet purchase of a billionaire when they refuse to subsidize or help pay for after-school programs for our children? Doesn’t seem fair, if you ask me, but in the mind of a guy like Paul Ryan, the simple mind of a guy like Paul Ryan, that makes perfect sense. Give it all to the wealthy, crash the economy, screw the poor, because those people are going to write you a check next time you’re up for reelection. That is how Republicans operate.