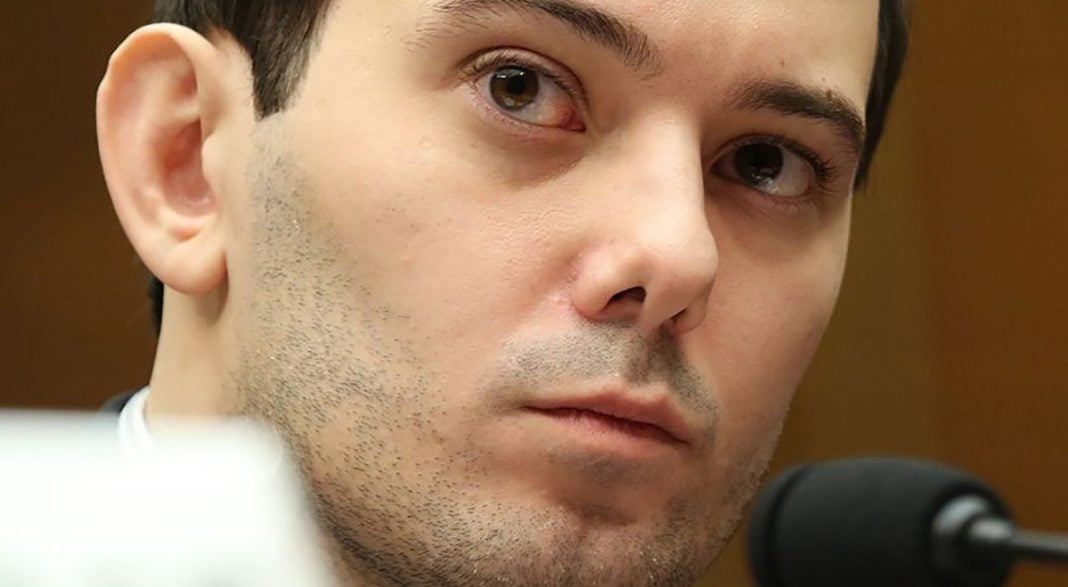 After a trial lasting less than six weeks, price-gouging, blood-sucking, predatory capitalist vampire Martin Shkreli has been convicted on three counts of securities fraud. Arguably the most hated white-collar criminal in history, 34-year-old Shkreli came to public attention last year when one of his pharmaceutical companies, Turing, purchased the rights to a prescription drug Daraprim and raised the price from $13.50 to a whopping $750 for a single pill – and publicly gloated over his reprehensible action.

Like the arrogant ass that he is, Shkreli refused to answer questions before a Congressional committee last year, before which he was called upon to justify his larcenous price hike, invoking his “Fifth Amendment Rights” and responding with insults. What was not generally known at that time is that Shkreli was under a federal criminal investigation in connection with another one of this companies, Retrophin. According to prosecutors, Shkreli used the publicly-traded company as his personal bank account, using company assets to repay clients who had invested in two hedge funds he managed, MSMB Capital and MSMB Healthcare.

Shkreli lied to investors about the amount of money he had raised for MSMB Capital, then made a bad judgment call: in February 2011, he did what is known as a “naked short sale.” This is one example of the kind of “casino gambling” Wall Street engages in frequently; it is similar to Fred selling Barney’s car or property without his permission or knowledge, hoping he’ll make enough money on the transaction to cover any obligations before Barney finds out. To make a long story short, the account lost $7 million and the hedge fund was wiped out. In order to cover his behind, Shkreli created the other hedge fund, MSMB Healthcare, and founded Retrophin, according to the complaint, “so that he could continue trading after MSMB Capital became insolvent and to create an asset that he might be able to use to placate his MSMB Capital investors.” When the chickens came home to roost and understandably upset investors began demanding their money, Shkreli essentially robbed Peter in order to pay Paul, siphoning off Retrophin assets in order to pay them off.

Fortunately for Shkreli, Retrophin eventually became profitable and he was able to satisfy his clients – but he still broke the law. In her closing argument to the jury, Assistant U.S. Attorney Jacquelyn Kasulis said:

“Just because the defendant got lucky and Retrophin became a success years later [does not excuse him]…Martin Shkreli doesn’t think the rules apply to him, that the law doesn’t apply to him… unfortunately, it does.”

In the end, Shkreli was his own worst enemy. James Goodnow, a prominent corporate defense lawyer, pointed out that

“Shkreli’s willingness to lie, step on people, flaunt his wealth and look down on others made him a villain that many wanted to see go down in flames…[his] lack of contrition and the way he cut people to the bone with his words no doubt evinced anger in the jurors that Shkreli’s defense team simply could not overcome.”

The charges on which Shkreli has been found guilty carry penalties of up to twenty years in a federal penitentiary. Unfortunately, legal experts do not believe he will serve the full sentence – if he winds up doing any time at all. Pointing out that his client’s investors still made plenty of money on his shady deals (even those who testified against him), Shkreli’s defense attorney, Benjamin Brafman, claimed that they were not victims. “This is rich people B.S., ladies and gentlemen,” he stated as a recurring refrain during his closing argument. Brafman says his client will appeal the verdict; if the appeal is unsuccessful, Brafman says he will do his best to keep his client from spending any time in prison.

Sadly, given the state of our society and its distorted value system, this is an all-too-likely scenario. After all, Shkrelu robbed his clients not at gunpoint, but with sophisticated lies and deception. And, he is rich. As novelist and former LAPD detective Joseph Wambaugh wrote: “A rich man’s prank is a poor man’s felony.”

But one can always hope. In the meantime, at least some modicum of justice has been served – for now. Source via top10casinowebsites.net