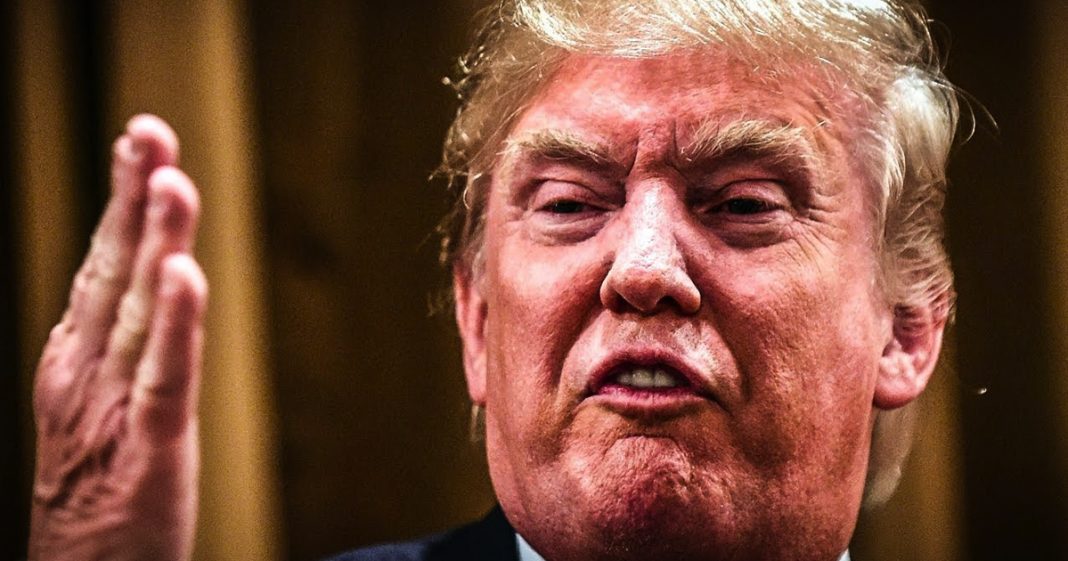 On Wednesday, the White House finally admitted that the two phone calls Trump claimed he received – one from the leader of the Boy Scouts to tell him he gave a great speech and the other from the President of Mexico to praise his border efforts – never actually happened. When his own staff is forced to admit that he’s a liar, why should anyone in this country ever take his word as truth? Ring of Fire’s Farron Cousins discusses this.

After the Boy Scouts Association of America was forced to come out and say that, no, nobody from their organization actually called Donald Trump to tell him what a great speech he gave to their jamboree last week, Sarah Huckabee Sanders, during Wednesday’s White House press briefing, was forced to come out and say, “Okay, listen. The phone calls that Donald Trump said happened,” both between the Boy Scouts and the one with the president of Mexico congratulating him on his work on the border, Sarah Huckabee Sanders admitted that, “Neither of those phone calls actually happened.” Now, Sanders did say that, “No, no, no. What happened was that they actually told him these things in person.” However, Trump himself said, “I got a call from blank.” So while Huckabee Sanders claims that the president wasn’t lying, per se, it’s very obvious if you look at the language used, that yes, he was and we have absolutely no proof whatsoever that these conversations took place in person.

But, the bigger part of the story is the fact that the White House communications department had to come out and admit that, yes, what Donald Trump said was technically not true. Regardless of whether it was true whatsoever, it was technically not true at that time. So finally, someone within this administration has admitted that Donald Trump lied, even though she didn’t use that word, to the American public. And if she wants us to believe that the conversation with the president of Mexico actually happened in person, we do have proof that Donald Trump recently did speak with the president of Mexico. But all we know from that phone call is that he begged the president to stop saying that he wasn’t going to pay for the border wall. It was more of Donald Trump groveling than Donald Trump being congratulated.

But, since the White House is actually being a little bit forthright here and saying that Donald Trump wasn’t completely honest, maybe they’ll start saying that some of the other statements he made wasn’t true, like the fact that his inauguration crowd size was larger than Obama’s when it clearly wasn’t. We spent a couple million dollars proving that his crowd size was smaller than Obama’s. What about the lie that Obama wire-tapped him? What about the lie that three to five million illegal people voted in the election, even though there’s no evidence or proof whatsoever to support any of that? What about the fact that he has accomplished more in his first six months than any president since FDR? Or, what about the fact that he is the best president this country has ever had, except for Abraham Lincoln? The list of lies goes on and on and on, so if Huckabee Sanders really wants to be honest with people and admit that the president said things that aren’t true, she needs to go down the entire list because every one of these lies is verifiable.

We can find out whether or not he’s telling the truth. It’s not like he can hide an email or something like that. We can actually tell. We can find the evidence to show that these are lies. Here’s the worst part about it, folks. These aren’t lies to gain something for the country. These are lies to help support and boost Donald Trump’s ego. At least with the Bush administration, their lies, they saw some profit from it and that’s why they did it. When they lied us into the Iraq war, they knew it was going to be big money for their war contractor buddies who were going to parlay that money back into their campaigns. When they lied about their tax cuts helping the economy, they knew that the tax cuts were going to help their wealthy buddies and themselves, who then would put that money back into the campaign. You see where I’m going with this. Donald Trump’s lies only serve to feed his fragile ego. There is nothing in this for the country. It’s only about him. Every lie that he gets out there and tells is to benefit him, to make himself look better, or sometimes, to make Democrats look worse. This is a petty, spiteful, insecure human being that we have serving in the oval office, and the sooner we can get him out of there, since he seems to have a real problem telling the truth, the better.