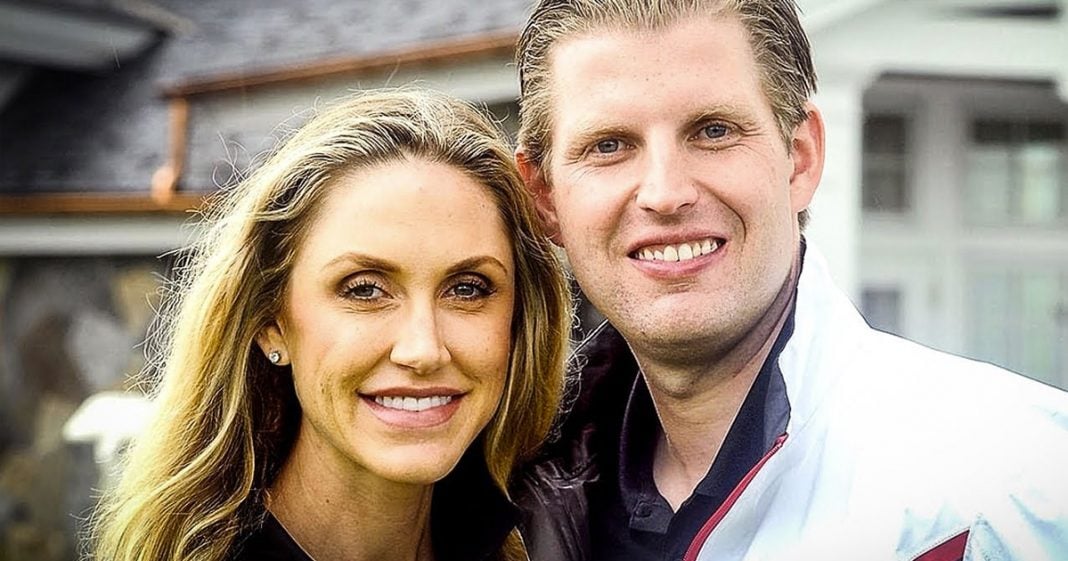 For the last few weeks, Donald Trump’s daughter-in-law Lara Trump (wife of Eric Trump) has been posting videos to Donald Trump’s Facebook page claiming that she is bringing the “real news” about how amazing Donald Trump is performing as President. While most aren’t taking the videos seriously, there are a few hardcore Trumpites who are taking her word as gospel, swallowing the propaganda that is being fed to them by the Trump family. Ring of Fire’s Farron Cousins discusses this.

Most people have never heard of Lara Trump, who happens to be Eric Trump’s wife, thereby being Donald Trump’s daughter-in-law. But recently Lara Trump has come into her own little bit of fame by producing a series of Facebook videos that run every Sunday evening, opposite Game of Thrones, that she posted on Donald Trump’s Facebook page, where she claims to be reporting the “real news”. Because as she points out, and as Donald Trump has pointed out, you can’t trust anybody in the media out there in the world, so it is her job. Lara Trump has taken on the specific responsibility of being the only person in this country actually reporting what’s really happening in this country.

It’s all on Lara Trump, folks. She is the only one telling us the real stories about the real Donald Trump, and the real accomplishments that he has had as President of the United States, because that’s what it’s all about. She says she wants to talk about his accomplishments, the good things he’s doing that that fake news media continues to ignore. What’s weird about that is if she’s doing videos talking about Trump’s accomplishments … She’s actually made several different videos. I didn’t know he had enough accomplishments to fill out an entire minute, let alone several videos.

The even scarier part is that some of these videos have over 40,000 views on them, more than 10,000 shares, which shows that the little Trumpites and the alt-right all throughout this country have absolutely no problem listening to this woman, taking her word at face value, and then spreading it all around. That’s exactly what fake news does. You post a video, you don’t cite any sources, you just make wild claims and accusations, and you get your idiotic followers who won’t bother to do the research behind it to share it with their people. That’s exactly what everybody’s accused the alleged Russian trolls of doing. Now the Trump administration is literally doing this.

I know Lara Trump’s not a member of the administration, but Eric Trump being the president’s son, I think it’s pretty safe to say that this is a Trump Administration project. Lara Trump has absolutely no business getting in front of a camera and talking about Donald Trump’s accomplishments, because there are none to talk about. Donald Trump has done nothing good for this country. He’s done nothing productive. All he’s done is whine and cry like a giant man-baby, and blamed everything on Democrats, even though they’re the minority party in both the House and the Senate. Once he couldn’t get his Health Care Bill passed, he started also attacking Republicans.

The man is throwing a massive temper tantrum that’s now been going on for several months, but Lara Trump thinks that it’s time we start talking about all of Donald Trumps accomplishments. That’s going to be a very short video, if she ever actually gets around to talking about the good things the President’s done. The rest of us are going to talk about the chaos that this man is creating and the chaos that his staff and cabinet is creating, and the giant mess that they’ve made … That the rest of us who actually live in reality, unlike Lara and Donald Trump, are going to have to clean up one day.