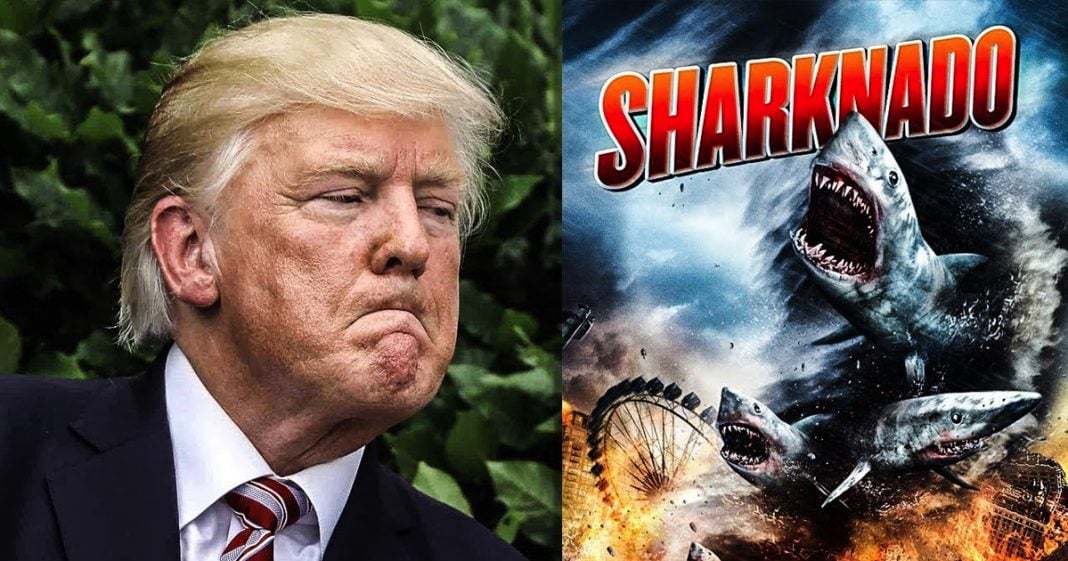 According to reports, Donald Trump was in talks in early 2015 to portray the President of the United States in Sharknado 3, but dropped out due to the fact that he actually wanted to run for President. When the role was recast, Donald’s lawyers threatened to sue the filmmakers and shut down production because Trump felt like he had been slighted by them – even though he’s the one who dropped out! Ring of Fire’s Farron Cousins discusses this.

In one of the more bizarre stories that we’ve seen come out of the Trump Administration recently, according to new reports, Donald Trump and his lawyers personally threatened to shut down the production of Sharknado 3 back in 2015 if Donald Trump was not allowed to portray the President of the United States. Here’s what happened.

Donald Trump was in talks with producers of Sharknado to play the President of the United States, but Trump’s advisors, his people around him, advised him to back out of the role because it might interfere with a potential future presidential run. At the time, Donald Trump had not yet made up his mind about whether or not he was going to run. He wanted to be in the movie, but then he decided that he actually wanted to be the president, so he pulled out of talks with the producers and said, “I’m not going to do this,” so they moved on. Here’s the thing. When they moved on and picked Mark Cuban to portray the President of the United States, Donald Trump and his lawyers got so angry that they threatened to sue the producers and completely shut down productions of the sci-fi horror movie comedy flick.

Here’s what’s so funny about this entire story. The point of the Sharknado movies, in case you haven’t seen them, is that it’s supposed to be this outlandish, could never happen, ridiculous version of everything in the world. For example, the whole reason the sharknadoes exist, if you watched the first one, was due to climate change forcing sharks in coastal waters, water spout sucked them up, blah, blah, blah, there you get a sharknado. They took an issue that was real, but made it slightly comical. That’s what they’ve done. When they put Mark Cuban in the White House as the president in Sharknado 3, they also made Ann Coulter the vice president. It was supposed to be something completely ridiculous that folks would never believe could ever happen. It was just supposed show how ridiculous it is. They originally wanted Donald Trump as the president, because they thought that would be so outlandish and ridiculous that people would get a good laugh about the thought of having Donald Trump as President of the United States. Then it actually happened.

Parody has become reality. This isn’t just a simple story about Donald Trump being pissed off at Sharknado. It’s about the fact of what we’ve become as a country. Things we used to think would never happen, like the Simpsons portraying Donald Trump as president, because it’s good for a laugh, because nothing that stupid could never happen. Right? Sharknado thought the same thing. They underestimated the stupidity of the American public at large. In large numbers, we’re pretty stupid as a group of people, and I hate to say that. I’m not picking on any one person in particular, but I do have to point out that it is Republicans who voted Donald Trump in office because apparently they saw something in him that the producers of Sharknado did not. They thought he’d be great for the role of president.