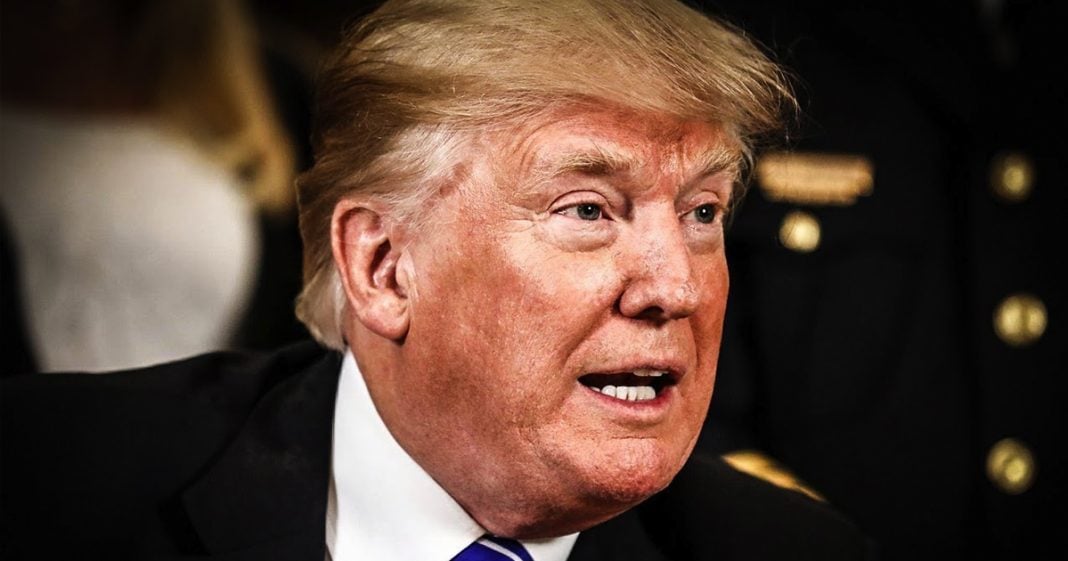 According to Donald Trump, he has received several congratulatory phone calls in the past week. One was from the Boy Scouts to tell him what a great speech he gave, and the other was from the President of Mexico who complimented him on his border work. The only problem is that these calls never happened – Donald Trump made them up. This man has a very serious problem with honesty and is clearly unfit to serve as President. Ring of Fire’s Farron Cousins discusses this.

Most people in this country understand that Donald Trump has a very real problem with telling the truth. He’s not an honest guy, he’s not a trustworthy guy, and he’s not shy about making things up, even when they’re easily verifiably false. In fact, that’s what he’s done in the last week. According to Donald Trump, he has received two wonderfully amazing phone calls in the last week. The first one came from the Boy Scouts, telling him what a great job he did at that speech, and how much everybody loved it, that was just one of the greatest things they’ve seen in their life. The second phone call he got was from the President of Mexico, congratulating him on what a great job he is doing on border security here in the United States. They just love it down there. Everything’s great, Donald Trump’s just the greatest guy that ever lived.

Here’s the thing, neither of those phone calls actually ever happened. Donald Trump claimed that he got the phone call from the leader of the Boy Scouts and from the President of Mexico, to congratulate him and tell him how awesome he is. Then both groups had to come out and say, “No, we actually didn’t call you. Why are you making this up?” Now, it’s one thing for him to go out there and lie and say, “Look, I’m getting emails all the time, I’m getting phone calls, people telling me how much they love me.” We the public can’t necessarily prove that that’s not true. But when you start saying a specific person called you, yeah, that person can easily say, “Yeah, I didn’t. Would you like to check my call log? I don’t personally like the guy, and not a fan of what he’s doing.”

That’s basically what’s happened at this point. Donald Trump got busted lying twice about two phone calls that never happened. And the reason he’s even lying about it in the first place is because he needs to stroke his own ego, because that’s all he has. He wants to think that people like what he’s doing. He wants to think that people are congratulating him and think he’s doing a great job, because that’s what his little bubble is all about. But once he steps outside that bubble, he understands that the Boy Scout leader had to friggin’ apologize to the public for how disgusting Donald Trump’s speech was. And the President of Mexico does not care what Donald Trump is doing, and he makes damn sure everybody knows that he’s not paying for the stupid wall that Trump still wants to build.

Donald Trump does not have any friends. Donald Trump does not have any allies. The only people in this country that think he’s doing a good job and want to congratulate him are the alt-right, and the people he has surrounded himself and his cabinet with. Some of them, I imagine most of them probably don’t want to congratulate him either, because they’re terrified of losing their jobs. But that is the reality that we live in, folks. Donald Trump is not a member of that reality. He is in his own little mental illness, dangerously narcissistic bubble, where he thinks all the great things are happening for him, where he thinks everybody thinks he’s doing a good job, because he refuses to accept the truth and admit that the majority of this country doesn’t like him. We don’t like what he’s saying, we don’t like what he’s doing, and almost half of us are ready to get his ass impeached and get him out of office.