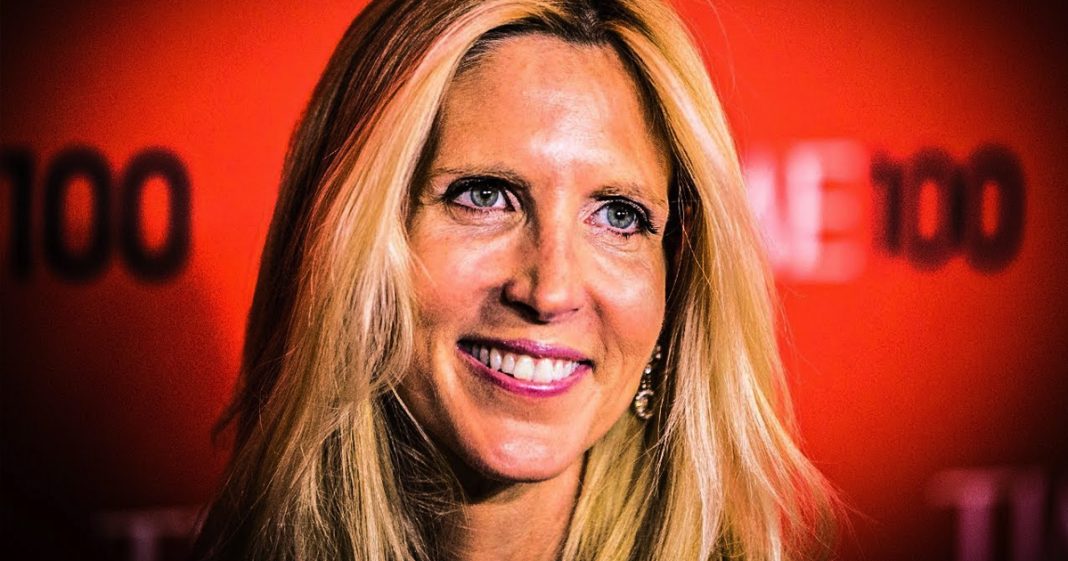 During a panel at this past weekend’s Politicon conference, right wing author and talking head Ann Coulter claimed that smoking marijuana “makes people retarded” and then they end up becoming bus boys. She cited several non-existent studies during anti-marijuana tirade, but was unable to actually say where the studies came from or who authored them. Ring of Fire’s Farron Cousins discusses this.

Right-wing firebrand Ann Coulter has made a name for herself in the United States as being someone who’s not afraid to go out there and say crazy, outlandish, completely false things in order to get a little bit more media attention. And what she said this past weekend at Politicon 2017 is no different than some of her past statements. But it’s equally as disgusting, and that’s why we need to talk about it.

As somebody who worked for several years as a bus boy at a local restaurant here, I can tell you that that’s really not how you become a bus boy. You need a job to get through college, you take that and that’s what it is, but that’s really beside the point here. The point is that during this panel that Coulter was on where she was extolling the evils of marijuana, not only did she make that statement, but she went on to make several other very harsh and very incorrect statements about marijuana use in the United States. First of all, she said that nobody gets arrested for marijuana. They always make plea deals, nobody goes to jail for possession or for smoking marijuana. Yeah, that’s also not true. Between 2001 and 2010, more than eight million Americans went to jail for either possession of marijuana or using marijuana. Furthermore, African-Americans are five times more likely to go to prison on marijuana charges versus their white counterparts.

Now currently, at least half of the United States has legalized some form of marijuana, either recreation or medicinal. Ann Coulter’s comments are basically an attempt by a right-wing talking head to take America back 100 years, back when marijuana was super evil and nobody knew anything about it, because we didn’t have any scientific studies and didn’t bother looking at some of the virtues that this particular plant might have for American citizens. There is proof that marijuana usage in areas where medicinal marijuana is legal, and even recreational marijuana … Opiod abuse, you know that big epidemic that’s killing people all over this country, that goes down. Marijuana has proven to be a fairly effective treatment for soldiers coming back from war with PTSD. It helps stop seizures. It helps cancer patients develop an appetite so they can continue eating so they don’t die from malnourishment. But Ann Coulter is sitting there on a panel, in front of several other intelligent people, Ann Coulter was not one of the intelligent folks, but telling us that if you smoke marijuana, you will become retarded, and then you will become a bus boy, as if the two are somehow related.

Ann Coulter does not understand the basics of marijuana. She doesn’t understand that states that have legalized marijuana are experiencing economic booms as a result of that, on top of the fact that they’re getting additional tourism dollars from marijuana tourists. There really are not that many downsides to legalizing this plant, but Ann Coulter doesn’t get it. She would rather sit there and insult millions of people who use this drug, call them all mentally-disabled, and somehow say that you can’t be a successful person if you use it.

Now, I personally do not use it. But there are plenty of people in this country ranging from billionaires all the way down who have and who continue to, and I think they would greatly disagree with Ann Coulter’s statement that they have some kind of mental disability because they choose to partake in this plant. And I say it that way, because that’s what we have to understand too, folks. This is a plant. This is something that grows on the earth. And yet, people like Ann Coulter think that using this can make you retarded, when in reality there are far more medicinal benefits to this specific plant than we have come across in more than 100 years of medical research.