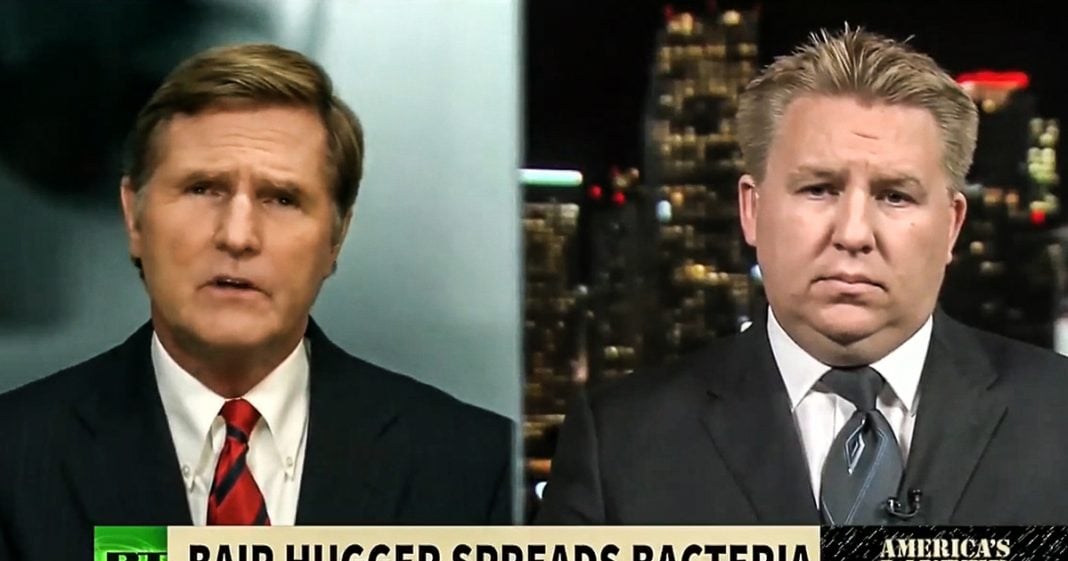 When hospital patients go under anesthesia, their body temperature can drop to dangerous levels. Because of this, warming blankets and heating devices are necessities in hospitals all over the world. But according to scientific studies, a popular brand of warming device known as Bair Hugger is actually causing deadly infections to spread to patients. The Bair Hugger story is one that few people know about, but it’s one that best describes the culture of greed and complete disregard for safety that corporations embrace.

In 1987, a medical device called The Bair Hugger was invented and brought to market. This device is used to keep patient body temperatures from falling to dangerous levels during and after surgeries. The Bair Hugger was manufactured by Arizant Healthcare. Later, that company was bought out and became a division of the 3M corporation. The device itself is a “forced-air warming” device that uses a portable blower in order to surround the patient with warm air while draped with a disposable blanket.

Since the product entered the market, it has generated sales of over $31 billion dollars, making it a highly lucrative medical device for the 3M corporation. And estimates show that more than 200 million patients have used this device ever since. But the Bair Hugger blankets have a serious design flaw that 3M was well-aware of for at least seven years.

The warm, moist air that the blanket circulates is the perfect breeding ground for potentially life-threatening bacteria, and some patients that used the Bair Hugger devices developed serious, deep-joint bacterial infections as a result. In some cases, the infections were so severe that patients died.

In at least 14 suits filed against 3M and Arizant in federal courts across the country, surgery patients alleged that the introduction of warm air disrupts normal air flow in an operating room.

They say this allowed bacteria to circulate and enter incisions, causing infections which require additional medical procedures, including premature replacement of their prosthetic devices and amputations. The suits allege that 3M and Arizant have been aware of the risk posed by the device since at least 2009, and still actively market it as safe. More than 50,000 units are currently in use in America. And, as usual, instead of doing the responsible thing by pulling the product off the market, or at the very least warning doctors and hospitals about the potential dangers, the company decided to ignore scientific data and push their product on hospitals.

On top of that, 3M launched a PR campaign aimed at discrediting reports that say their product is dangerous. Part of their campaign involved launching a website called “Truth About Bair Hugger dot com”, where they tell readers that all of the evidence showing their device causes infections is not true. The truth is 3M doesn’t want to give up any market to their competitors who are putting out far-safer products. 3M will stop at nothing to convince people that their device is perfectly safe. The fact that the company is facing more than one thousand lawsuits says otherwise.

Joining me now for more on this is attorney Daniel Nigh. Daniel explain to the folks at home how these forced-air heaters are supposed to work, and why are they necessary at all?

Daniel: Well, a typical hip or knee replacement’s going to last about an hour to two hours, because of that length of time that a patient’s under anesthesia, they need to have warming at that time, because if they get too cold during a surgery, they’ll go to hypothermia and all the associated consequences along with it. So the warming blanket is supposed to push a lot of hot air through a mattress that’s basically placed over their body during the procedure, and to keep them in normothermia.

Mike: Okay well how does the Bair Hugger increase the risk of infections? Studies say that it’s due to design flaw, so exactly what is that flaw? What are you maintaining in this lawsuit?

Daniel: Well, here’s the problem. We all know that hospital floors are dirty, in as much as hospitals try to keep them as clean as possible, they are going to be infectants or bugs that lay on the hospital floor. The hospitals try to prevent those bugs from getting up into the surgical field, by having air that blows down, cold air that blows down to keep the infectant on the floor. The problem with this heating device is that hot air will escape either through the warming blanket or the device, it’ll go down to the floor, grab those infectant bugs off the floor up into the surgical field, and when the surgeon is doing his surgery, he’s going to move from side to side collecting that infectant on his hands, and depositing it right into the patient’s open wound. Right on the device of the hip implant or the knee implant.

Mike: Are there tests that clearly show … Can you actually visualize and see this with some type of testing? I suppose that it’s been done to show what you’re maintaining here is correct?

Daniel: It absolutely can, there’s been multiple studies that have recreated the surgical field, they’ve been able to put fog, or use different bubbles to be able to show that this infectant, when the heater device, the forced-air warmer device for the Bair Hugger is turned on, they can see these infectants being desposited in to the surgical field, and that’s the problem.

Mike: What types of infections are we seeing in patients where this device is being used?

Daniel: Well, the bugs themselves are going to be the normal bugs that are on any hospital floor, so that’s going to be, your common ones are going to be staph, MRSA, you’ll see some enterococcus infectants, but the types of infections that we’re talking about here are periprosthetic joint infections, and those are the deep infections that, during the surgery, the infectant is binding itself to the hip or knee replacement. It creates a biofilm on the implant itself, which makes it very difficult for the patient’s own body to attack that infectant.

Daniel: Yeah, that’s the problem. Oftentimes even a two-stage removal won’t be able to eradicate this infection. We’ve got clients who have two-stage removals, multiple other surgeries and I’ll tell you, from my own clients, I have about 5 to 10% of my clients who have had amputations after having periprosthetic joint infections. Now the complication rate isn’t that high, but it’s probably somewhere between 1 to 3% once you’ve been diagnosed with a periprosthetic joint infection.

Mike: Well the company is facing more than 1100 lawsuits from patients who say that they’ve been injured by this device. Some are suing on behalf of family members who’ve died from these infections. What’s been 3M’s response to these lawsuits? Has there even been a … has there been an effort to say, “Gee, we might have gotten it wrong, let’s pull this product off the market until we know more.” First of all, another important part, this isn’t even a necessary product, there are plenty of competitors out there to the Bair Hugger, that do the same thing aren’t there?

Daniel: Yeah, absolutely. At this point 3M, they have vigorously fought this lawsuit, and at this point they’re going to continue to fight it, and so we’re going to have the battle of the experts coming up, where both experts testify, and we’re going to see, which experts are able to testify in upcoming trials. There are many alternative products on the market, there are multiple other forced-air warmers that have come out from other manufacturers, where they’ve corrected the defect that the Bair Hugger has, where they try to minimize the amount of escaped hot air hitting the floor of the hospital. So there are other forced-air warming devices, there are other types of devices such as a conductor warming blanket, which is more like a heating pad that we typically know of. It would be a large heating pad placed on the patient, and there is no air being blown in those types of warming devices.

Mike: Okay, so what’s not clear, I guess maybe it’s all about money again. I understand it’s a $31 billion in sales, but at some point doesn’t the company say, “Look, there’s enough information out there, there are enough problems out there that we should take a look, we should pull this from the market, maybe redesign, take another look.” I mean, don’t they actually save money in the long run by doing that? At some point, if you go to trial on this and this company gets hit, it could be a big problem for them nationally. What holds them from doing that? What stops them from doing that?

Daniel: I don’t think anything stops them from doing that, and we’re hopeful that they will put out a redesigned product that doesn’t have these flaws.

Mike: I’m interested again, we hear time and time again, if you ask the average American out there they say, “Well gee whiz, we don’t have to worry about things like this, because the FDA worries about it.” Tell us the history of what the FDA’s involvement has been in this, and what kind of direction they’ve given this company, if any.

Daniel: Well for most medical products including this Bair Hugger warming device, there’s a very simple path to being approved, for companies. They don’t have to show clinical trials generally, all they have to do is they have to show a 510(k), say that their product is substantially similar to another product on the market, and the FDA gives it their rubber stamp. We’ve seen the same thing happen here, that a company has conducted clinical trials, but generally their clinical trials are conducted to just try to prove the adequacy of the product, not look for the faults of the product.

Mike: Is this a case that’s being handled by multiple law firms as an MDL here? Talk about just … We’ve got about 30 seconds, but talk about how this case is being handled, where will it be tried?

Daniel: Well right now these cases are consolidated in the District of Minnesota and there’s also some state court actions going on as well at the same time. There are law firms from across the nation that are involved in this, we have multiple … great plain of firms that are involved, and we expect that the first trials are going to be occurring in the District of Minnesota, like I said, the upcoming battle coming right now, is going to be the battle of the experts. They’re going to be testifying in front of the judge on whether or not Bair Hugger warming blankets create an increased risk of infection during a hip or knee replacement.

Mike: Daniel, keep up the good work, keep us posted on this story.