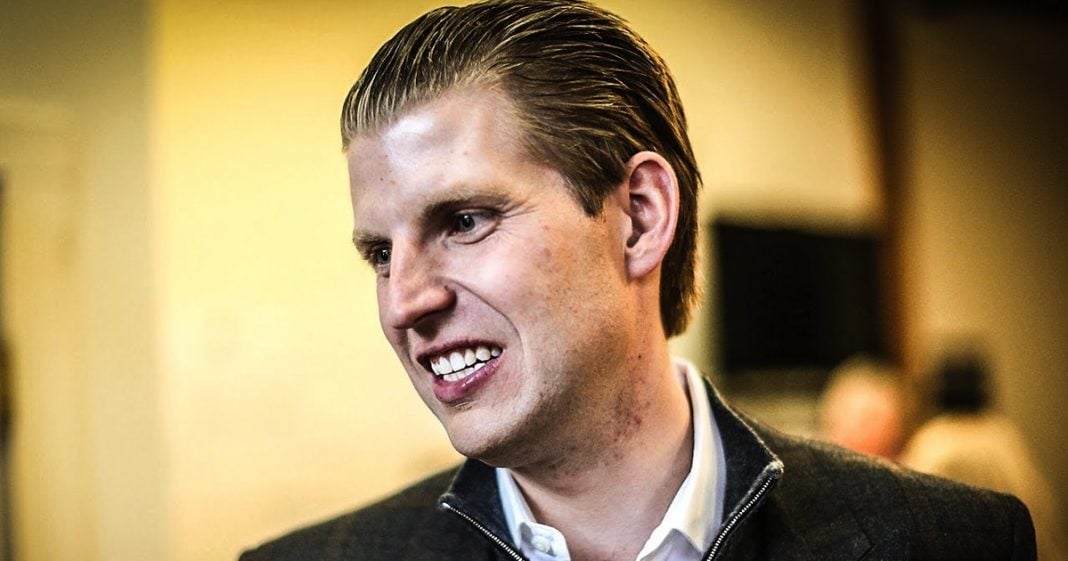 Eric Trump appeared recently on Fox News with Sean Hannity, to express his disgust that Republicans aren’t stepping up more to protect his dad. Maybe Eric should check out his dad’s nonstop Republican insults on his Twitter feed to get a better understanding of why nobody wants to play with the Trump team. Ring of Fire’s Farron Cousins discusses this.

According to a recent interview that Eric Trump gave to, of course, Sean Hannity on Fox News, Eric Trump is absolutely furious that more Republicans in DC are not coming out to defend his father. I mean, after all, according to Donald Trump himself, he carried a lot of these Republicans on his back during the campaign. So Eric Trump decides to go to the friendliest guy at Fox News, who’s going to do nothing but lob softballs at him all evening, and complain about the fact that these mean old Republicans in Washington, DC, won’t stand up for the rampant corruption that is known as the Trump administration.

Well, Eric, if I may point something out to you, your father has spent the last several months attacking Republicans on Twitter and in interviews. It doesn’t matter which one; sometimes it’s McCain, sometimes it’s Murkowski or Collins or other folks, “Lyin’ Ted” Cruz, Lindsey Graham. See, when you spend all of your time talking about what a piece of crap every other person in the room is, then when you start getting attacked, and you expect those same people to stand up and defend you, yeah, that’s not how it works. You get what you give, and I think your father, your family, is finally starting to experience a little bit of karma at this point.

Nobody wants to stand up for your father because he damn sure hasn’t stood up for any of them. He didn’t carry any Republicans on his back, certainly not in the election that he lost by three million votes, yet still became president. Republicans are going to do whatever they have to do to basically save their own careers, and at this point, Eric, your father’s administration is a cancer on the Republican Party, and nobody wants to take the side of cancer. They would rather go out on their own, be attacked by the President, and then use that, because they understand that the majority of the American public doesn’t like this guy. About half of this country says it’s time to impeach him, and only 17% of this country supported the health care bill that your father pushed.

The American public is not on your father’s side. Nobody, hardly, is on your father’s side, so why would you expect these Republicans who still have to go back and be accountable to their voting base back home, why would you expect them to take the least popular side in this argument, knowing that none of them have a spine? They will bow down to whatever power they think is going to serve them better, and luckily, right now, that power is with the people. Those are the ones they’re trying to appease by distancing themselves from your father. May not necessarily change their horrible policies, but it stopped the health care bill from going through.

People in this country are waking up and realizing that they suddenly have power. They had it all along, but they’re suddenly realizing it. Your father, Eric, believes that he has all the power, but reality is starting to show him otherwise. So don’t expect anyone to come to your father’s aid. Don’t go to Sean Hannity and whine and cry about it like a baby. Stand up and understand that sometimes, sometimes, even the wealthy get what they deserve.