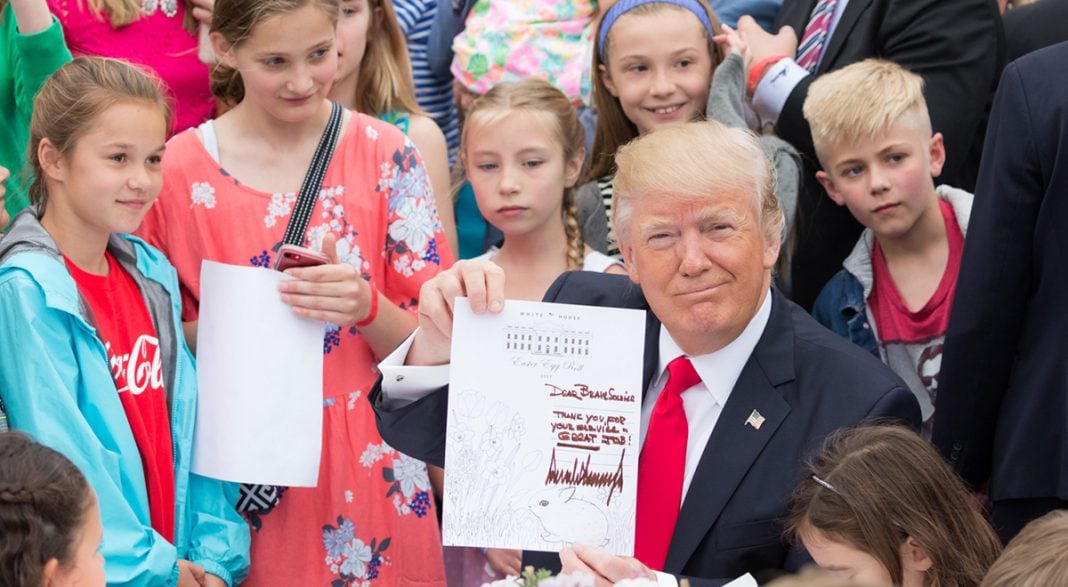 Trump has long been an admirer of infamous mid-20th Century dictator Adolf Hitler, and has been attempting to use that criminal’s work, Mein Kampf (“My Struggle”) as a playbook. Fortunately, as Thom Hartmann has periodically pointed out, Americans have had far more experience with liberty and democracy than did Germans of the 1930s. As a result, Trump’s hard-right, quasi-fascist agenda hasn’t been going over so well among the majority. However, there is a disturbing undercurrent that bodes ill for the future if it spreads: the brainwashing and indoctrination of children.

This isn’t a new phenomenon among Trump’s sycophants and disciples. During the campaign last year, three young girls calling themselves the “Freedom Kids” performed a “creepy,” badly-written song glorifying their parents’ candidate at a Trump event recalling Nazi rallies of eighty years ago.

Unfortunately, that youthful, misguided enthusiasm has not waned. At a White House press briefing last week, press secretary Sarah Huckabee read a letter from a 9-year-old boy named Dylan “Pickle” Harbin, in which he wrote, “…you are my favrit [sic] President. I like you so much.” Initially, there were doubts as to whether the boy even existed. However, the Washington Post confirmed that young Dylan was real – and he did actually write the letter.

According to his mother, who “does not consider herself to be very political,” young Dylan became enamored of Trump after his third-grade class held a mock election last year. According to the WaPo report, young Dylan likes Trump’s suits, the fact that he owns properties all over the world – and that Trump’s first name is the same as that of his best friend. (Apparently, the fact that Trump has no political experience and is a self-serving, bombastic, mentally unstable dictatorial demagogue didn’t come into the equation.)

This week, a 12-year-old girl named Millie March was interviewed on Trump’s favorite television program, Fox and Friends. During the interview, young Millie – dressed in Trump regalia (right down to her fingernails) – proclaimed, “[Trump] is doing an amazing job as president. He is even trying to repeal Obamacare right now. He is doing the best job as a president can you ever do.”

Let’s hope Millie never needs medical services. What is particularly frightening about this girl is that she is, by all indications, intelligent, perceptive and articulate. Where did she get these ideas? Not from her parents, who reportedly supported Ted Cruz. Does she understand that Trump is a misogynistic chauvinist who considers women to be his personal playthings? Does she have any inkling of the kind of future she will have if Trump’s anti-environmental, corporatist, authoritarian agenda becomes reality? (Maybe she needs to read The Handmaid’s Tale.)

Lest you fear that children such as Millie and Dylan are the harbingers of a 21st Century American reboot of the Hitler Youth, take heart: Earlier this year, Hana Nobel, writer for the online magazine The Bold Italic, interviewed over two dozen children between the ages of 3 and 12 from across the nation. Only one of them, a seven-year-old girl from New York, expressed any positive sentiments on Trump: “I like his hair. He gives good directions on Home Alone. He wears a fancy suit like daddy, and he beat Hillary.” Fortunately, every other child Nobel spoke with could see through Trump’s B.S. and they seem to understand the threat he poses to our democracy and the world.

Children like Millie and Dylan, like the adults continuing to cling to their support of a White House occupant who makes Warren Harding look like a paragon of honesty and statesmanship, have bought into the image and the propaganda. If they fail to wake up and smell the coffee burning, take comfort in the realization that they are only two very young and impressionable people who just happened to get hold of a very large microphone – and are no more than tools of Trump’s propaganda machine.