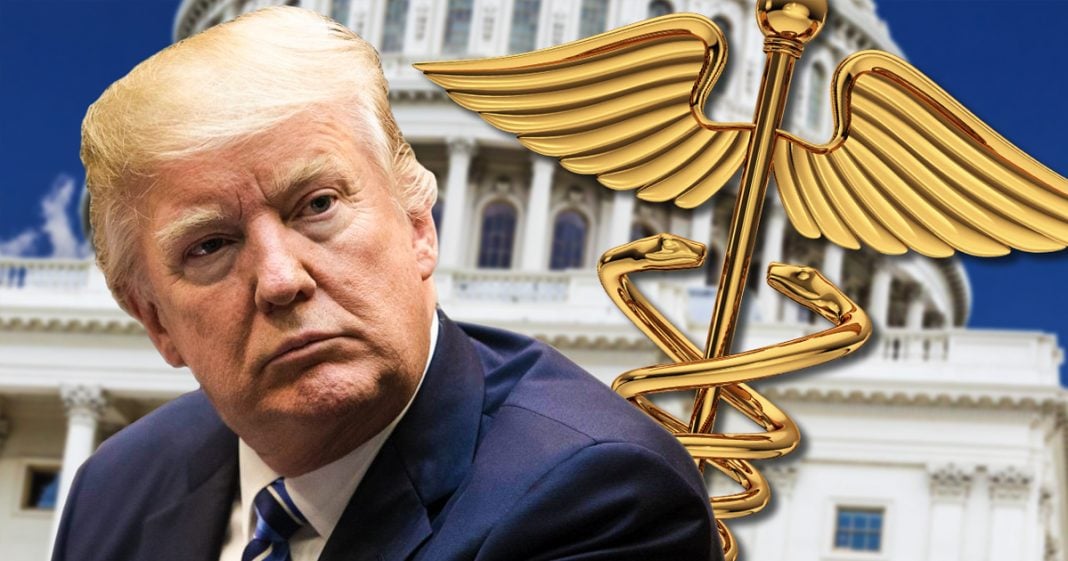 In the wake of the GOP’s spectacular failure to repeal the Affordable Care Act last week, Trump went on one of his endless Twitter rants, declaring that he would cut off the subsidy payments that help to offset insurer’s cost – which in turn, makes health coverage more affordable for everyone, including members of Congress and their staff members. Over the weekend, he threatened : “If a new HealthCare Bill is not approved quickly, BAILOUTS for Insurance Companies and BAILOUTS for Members of Congress will end very soon!”

His Twitter rants continued today: “If ObamaCare is hurting people, & it is, why shouldn’t it hurt the insurance companies & why should Congress not be paying what public pays?”

What is at stake are “cost sharing reduction,” or CSR subsidies to insurance companies. Together with insurance premium tax credits, CSR subsidies lower the out-of-pocket costs for people making up to 200% of the federal poverty level. Trump’s latest hissy fit over not getting his way is making insurance companies very nervous – and it may cause them to abandon the individual insurance exchanges that were set up under the ACA. In the end, this will undermine the entire program by causing dramatic increases in premiums and a corresponding reduction in choices.

In order to understand how this could cause Obamacare to implode, it is important to understand that the Affordable Care Act is not a “health care system” as they operate in most other advanced countries. It is a body of regulations that require insurance companies to provide a minimum amount of services at a reasonable cost. These regulations also include the elimination of lifetime “caps” on coverage and denial of coverage on the basis of “pre-existing conditions.” On one hand, this keeps the cost of medical care and services within reach for those with lower incomes. On the other hand, because of these regulations, insurers lose money on such plans. In order to make up for these losses, the ACA pays subsidies to these companies – to the tune of approximately $7 billion a year.

In 2014, GOP House members sued the Obama Administration over these plans on grounds that the funding had not been appropriated nor approved by Congress (recall that under the Constitution, Congress holds the “power of the purse”). Although a lower court ruled in favor of the plaintiffs, the Obama Administration contested the ruling. Currently, the case is before the Washington D.C. Circuit Court of Appeals, where in May, both sides requested a three-month delay. So, for the time being, CSR payments continue.

But here is where it gets sticky. Because that appeal was filed by the Administration, Trump has inherited the case – and he could decide to drop the appeal. If that happens, CSR payments will immediately cease.

This would not only affect low-income families. Under the ACA, members of Congress also get health coverage through exchanges – and currently, CSR payments are covering approximately 75% of those costs.

If Trump follows through on his threat, it wouldn’t change the law requiring insurers to provide coverage to low-income individuals – but since the subsidies would disappear, they would have to raise premiums by an average of nearly 20% above and beyond what is projected for next year. Right now, the clock is ticking: insurers must finalize all rate increases and determine what will be covered for 2018 by September. Now that there is uncertainty, it is possible – and even likely – that many insurers will simply leave the market. Larry Levitt, senior vice president of the Kaiser Family Foundation, points out, “The ACA depends on the participation of private insurers. If there are no insurers, there are no premium tax credits and no way for lower income people to get coverage. Most…would just end up uninsured.”

And that’s just how Trump, McConnell and Ryan would like it.