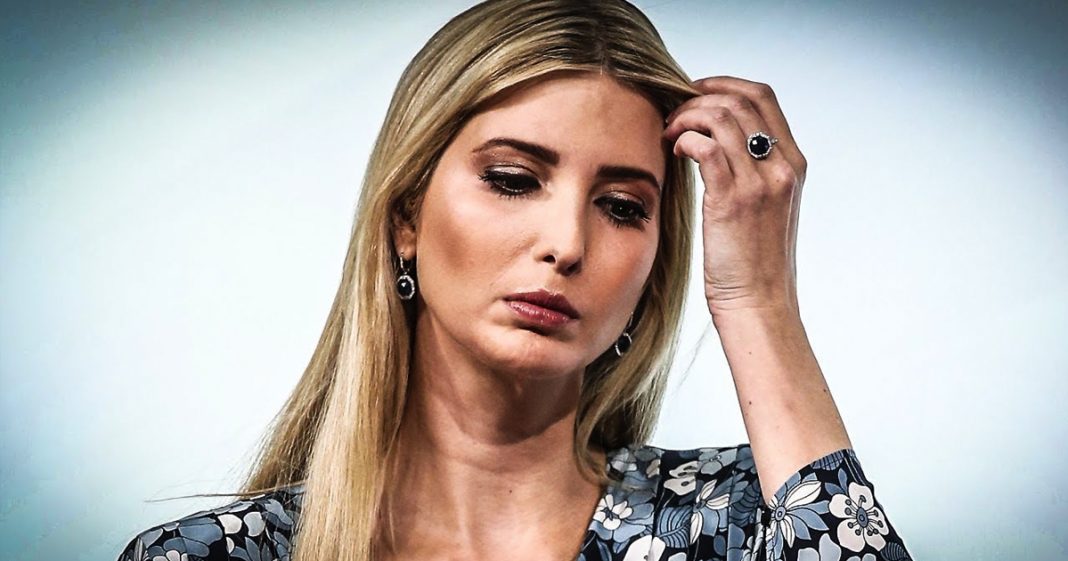 Ivanka Trump has finally given up trying to change her father’s mind on issues, and instead is now telling people to lower their expectations of what she can accomplish. The saddest part of that statement is that she thinks people actually expected her to do something when most of us saw through her charade since day one. Ring of Fire’s Farron Cousins discusses this.

According to an essay published in Politico late Sunday night, Ivanka Trump is telling those in this country that support her, “That you’re going to need to scale back your expectations on what I, Ivanka, can actually get accomplished in this White House.” As it turns out, according to this essay in Politico, Ivanka Trump has realized that sometimes there’s just absolutely no rational way to change her father’s mind. I think that’s beside the point. Most of us actually understand that. We know that you’re not going to change Donald Trump’s mind when he makes it up and decides to do a thing. That’s part of the narcissistic personality disorder that Donald Trump very clearly suffers from. No. What is more shocking about this Ivanka Trump statement is the fact that she thinks people in this country actually have expectations of her. As if there’s some group of people in this country who actually thought she was going to go into The White House, make a difference, be our little progressive friend on the inside working on issues like climate change and social issues like LGBTQ rights. No, no Ivanka. Nobody thinks that.

Now, there was a time, trust me, when people actually did think that. Most of them were Democrats. At the time, I thought it was a very stupid thing to believe and it turns out I was right. A lot of us were right. We have no reason to trust Ivanka Trump. We have no reason to put any faith that Ivanka Trump is going to go in there and be our social issues warrior inside of The White House. She is the one who is absolutely rolled over every single time her father has attempted to roll back our efforts to fight climate change. She was virtually silent recently when her father decided to ban trans people from serving in the military, something her family hasn’t done for several generations, and he went after these brave soldiers just because he didn’t like them and you did nothing.

Nobody in this country has any expectations of Ivanka Trump and why would we? This is a woman who’s using borderline sweatshop labor to produce her goods that’s she selling to American citizens at an astronomically high mark-up and products, I might add, that many stores are refusing to sell because they don’t want anything to do with her because she’s such a piece of crap. Ivanka Trump has been lying to the public since day one. She acts like she’s this big social justice warrior. She acts like she’s a climate warrior, but at the end of the day she’s a Trump. She’s just like Donald. Her husband is just like Donald and they own part of this. Don’t tell us to lower our expectations when we already had no expectations. What you’re trying to do is shift the blame. Say, don’t look at me. You know, I tried and I just can’t, so I’m sorry. No.

You may have told the public that you didn’t agree with these policies, but you’ve gone right along there with them. You can walk away from this administration any time you want and every second that you stay there is further proof that you’re just like every other disgusting member of your family.