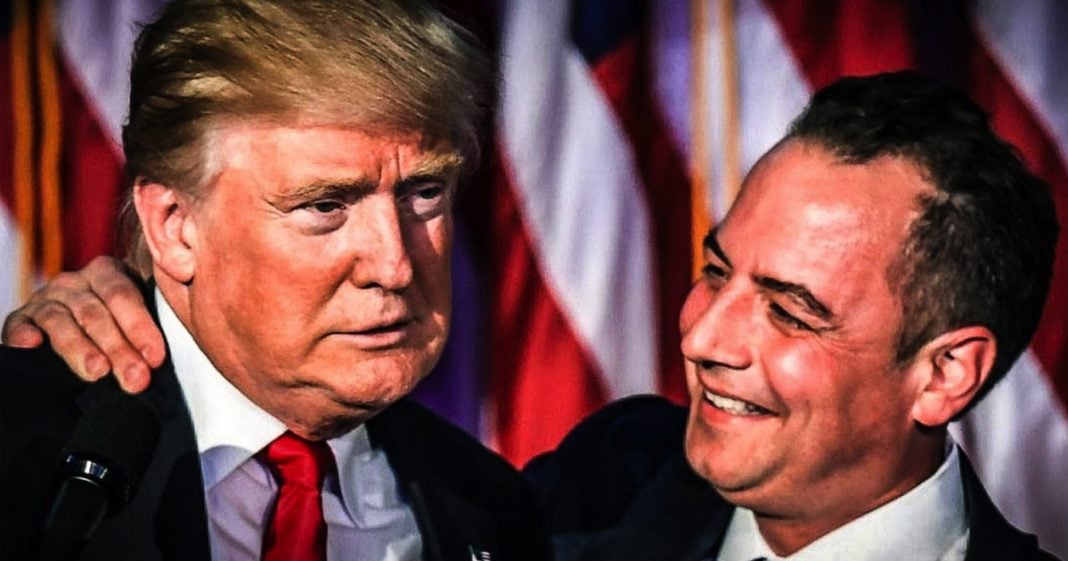 As most people are already aware, this past Friday, Reince Priebus was fired as Donald Trump’s Chief of Staff, which effectively means that Donald Trump is left with no other hardcore establishment type Republicans within his administration. While some Republicans probably look at that as a good thing, in reality, it’s probably one of the worst things that could happen to the Trump administration, at least if they want to stay in power for longer than two years. Ring of Fire’s Farron Cousins discusses this.

As most people are already aware, this past weekend, actually Friday afternoonish, evening time, Reince Priebus was fired as Donald Trump’s Chief of Staff, which effectively means that Donald Trump is left with no other hardcore establishment type Republicans within his administration. While some Republicans probably look at that as a good thing, in reality, it’s probably one of the worst things that could happen to the Trump administration, at least if they want to stay in power for longer than two years. Here’s why.

Reince Priebus was the former head of the Republican National Committee, meaning he was the top Republican for many years. Everybody who wanted anything from the Republican Party had to go through Reince. With him in the Trump administration, those hardcore Republicans, those loyalists, but more importantly, those donors knew that they still had a line inside the White House. That line is now gone. We have seen reports recently showing that the millionaire class, the billionaire class, the donor class of Republicans, are getting pretty fed up with Donald Trump. Yeah, they’re happy that the stock market is currently surging, but they also understand that if some of Donald Trump’s policies actually get enacted, all of those gains are going to come tumbling down. That’s just what happens.

The millionaire class understands that they no longer have an ally inside the White House. Instead, they’re operating and attempting, I guess, to work with an administration that wants nothing to do with any outside voices. In a normal situation, that would be ideal. You don’t want big money donors having influence over the President. But in this particular instance, when you’re dealing with a man who is completely irrational, possibly suffering from some kind of a mental illness that prevents him from fully being able to reason properly, you need outside advisors. You need as many voices as possible inside of that White House. I understand that any policy that would come out this is going to be devastating for the American public, for the working class, for the underclass, for everyone. But at the same time, Donald Trump’s decision to get rid of Reince Priebus, for God knows what actual reason, I imagine it has to do more with imaginary sleights than actual sleights, he is pissing off the people who control the purse.

Furthermore, on Saturday morning, Donald Trump decided to lash out on Twitter against Republicans in Congress, saying that they’ve let Democrats take over. They’re weak. “They look like fools,” is what he said, and this is unacceptable. They need to invoke the nuclear option, pass things in the Senate by a 51 majority, a move that would absolutely devastate this country. Republicans are actually a little bit smarter than to think that they could do that and get away with it and not feel the repercussions from their voters.

Donald Trump has pissed off the donor class, he’s pissed off the establishment of the Republican Party, and now he’s personally insulting Republican senators and Republican members of the House of Representatives. When you’re in the kind of situation that Donald Trump is in, when you’re under investigation for possible treason, along with several members of your family, members of your administration and staff, the last thing you want to do is insult the people who could save your political life. Because when it comes down to it, Donald Trump has alienated every possible person within the Republican party, including most of the base, with the exception of the American South, according to the latest poll numbers. The question’s going to be, when it finally hits the fan, who’s going to be left to support Donald Trump? My guess is there’s not going to be too many people standing up willing to say, “Hang on. In Trump’s defense, I have to say this.” No. In reality, he will have turned his back, burned the bridges to every Republican in this country that actually matters, and they’re going to let him absolutely go down in flames.