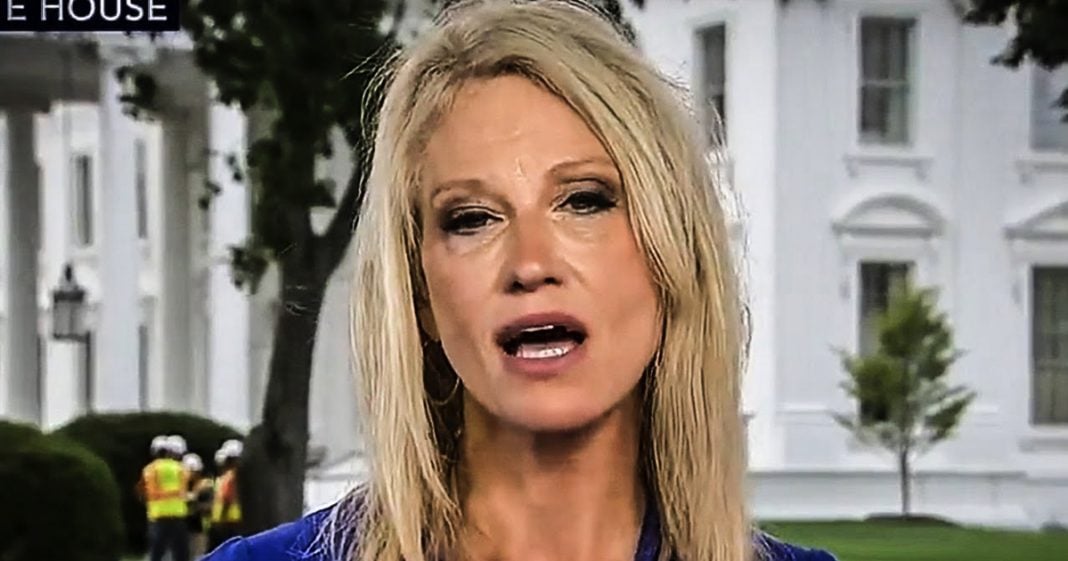 During an interview with Fox & Friends earlier this week, White House counselor Kellyanne Conway told hosts that having to fill out financial disclosure forms is “demoralizing” for people who want to work in the Trump administration. She also claims that divesting assets might be unfair and that all of this combined discourages people from wanting to work in the administration. Apparently she believes that hiding conflicts of interest from the public would make the administration even more “accountable.” Ring of Fire’s Farron Cousins discusses this.

Appearing on Fox and Friends earlier this week, White House Counselor Kellyanne Conway said that it’s kind of demoralizing that people who want to work for Donald Trump have to go through all these hoops and actually fill out some paperwork. Take a look at what Kellyanne Conway said in that interview.

Kellyanne Conway: There are so many qualified men and women who wanted to serve this president, this administration, and their country, who have been completely demoralized and completely, I think, disinclined to do so based on the paperwork that we have to put forward divesting assets, the different hoops you have to run through. Because this White House is transparent and accountable, we’ve all complied with those rules, but it’s really disincentivizing good men and women. I hope it doesn’t disincentivize Anthony.

See, here’s the interesting part of what just happened, though. She wasn’t there to talk about paperwork or financial disclosure forms. She was actually there to talk about the fact that there’s this ongoing feud between Anthony Scaramucci, the new White House Communications Director, and Reince Priebus. But, she had to throw that little jab in there and so that’s what I want to talk about. It’s demoralizing, according to Kellyanne Conway, to have to fill out a financial disclosure form. Let me go ahead and explain to Kellyanne the importance of those financial disclosure forms. It’s so that the government and the public, if we are able to see them, can understand if you have any conflicts of interest, to make sure that you’re on the up and up, that you’re on the level, that you’re not trying to screw over the American public to put more money in your pocket or money in the pocket of an industry that you have an interest in.

Those are very important documents that you have to fill out so that we know you’re being honest and actually doing your job for the American public. It’s not demoralizing; it’s necessary. It’s exceptionally necessary in the age of Donald Trump. How many times have members of this allegedly transparent administration had to go back and modify their forms, their disclosure forms and everything else? Oh, I forgot to mention that I met with more than a dozen foreign officials. Oh, I forgot to mention that I own five additional companies that I’m currently profiting from. Oh, I forgot to divest any of my assets while serving as President of the United States. That’s what we’re looking at here, and for her to go on national television and tell people that it’s demoralizing, that’s total BS. What we need is more disclosure, more transparency from the Trump White House. Right now, they’re operating completely behind closed doors. We haven’t seen Trump’s tax returns. We haven’t seen financial disclosure forms. We don’t know what kind of conflicts of interest he or any other member of his staff is running into. We don’t know where he’s been sending his money. We don’t know where it’s been funneled through. And that’s what we, the American public, need. Because you may be worried about you and your Trump staff, Kellyanne, but there’s more than 300 million Americans in this country that are demoralized by the Trump presidency itself.