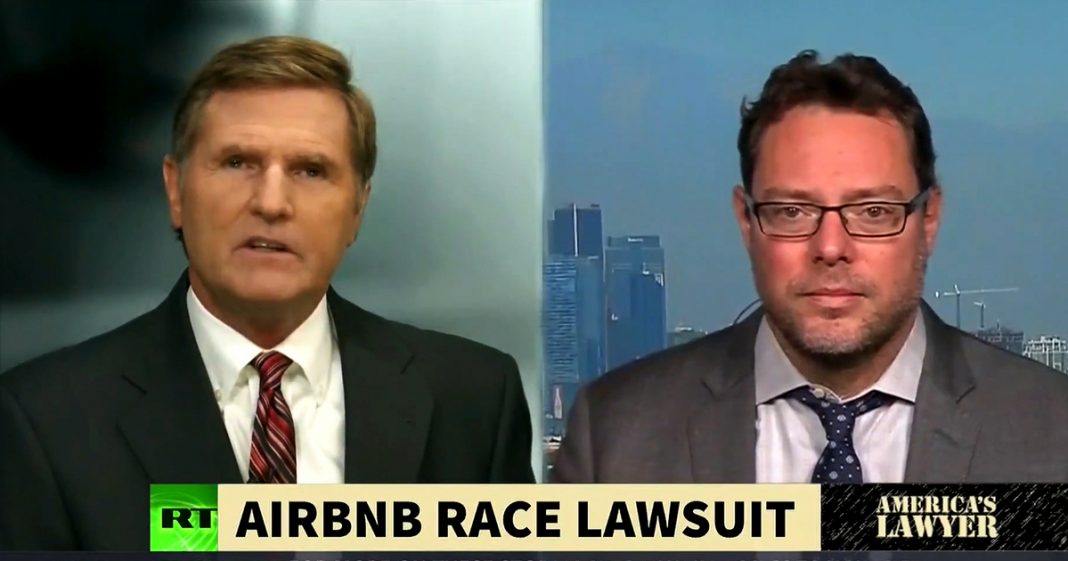 Via America’s Lawyer: Mike Papantonio talks with Kevin Kish, Director of California’s Department of Fair Employment and Housing about how racism never pays and the settlement reached to resolve the cause of why an AirBNB host exercised discrimination.

Papantonio: An AirBnB host has just agreed to pay a financial penalty and comply with anti-discrimination laws after texting to her Asian guest in California, “Go ahead. I wouldn’t rent to you if you were the last person on earth. One word say says it all. Asian” No, we’re not making that up. Joining me now to explain this is Kevin Kish, the Director of California’s Department of Fair Employment and Housing. Kevin, let me ask you this, can … how does your agency handle cases like this?

Kevin Kish: Sure. We’re the state of California’s Civil Rights Agency. What that means is that we take complaints of discrimination across the board, in housing and employment and businesses and we investigate those complaints and we file cases in court in appropriate cases.

Papantonio: Although this case has made many surprising headlines, many people are still just becoming familiar with this case. I mean, I think the importance of it is it’s showing, is it the edge of some kind of cultural shift where we think it’s fine to talk to people like that? What happened in this story between, with AirBnB? What actually happened?

Papantonio: How did this evolve?

Kevin Kish: Sure. The facts are pretty straight forward and it really is what you just described. It’s the young woman who with her friends had made a reservation for an AirBnB property and then right before they arrived in a snowstorm, the reservation was canceled. What makes this a civil rights issue or a discrimination issue is the use of racial reasons for canceling that reservation. It was just right out there in the text messages, so there wasn’t much ambiguity about this one.

Papantonio: As I mentioned in the beginning, what is, what is the agreement that’s been reached between your agency and the AirBnB? How do you go about reaching an agreement? What types of agreements do you reach in these types of civil rights kinds of cases?

Kevin Kish: Sure. In California for a violation of the, for most fair housing violations, there’s going to be a $4000 penalty. It’s going to cost you to discriminate against people in housing. Then there are additional monetary damages potentially, but what made this agreement unique was in addition to the traditional reporting and promising not to discriminate and paying a fine, the host here is actually going to enroll in an Asian-American studies course in college. She’s going to volunteer for a civil rights organization and she’s going to participate in a community education panel that we’re going to host about bias.

Papantonio: The fact that part of the agreement includes Miss Barker taking the college level course in Asian-American studies has gotten a lot of attention. Why did your agency choose to include that as part of the work here? What are you hoping to achieve with that decision? I suppose some people just come up a certain way. It’s what they’re exposed to. The other side of the argument as you’ve heard so many times is gee whiz, these are personal choices. These are rights that people should have where it comes to their property. They ought to be able to make decisions if they want to serve somebody. They ought to be able to make decisions according to what their personal beliefs are. What are you hoping to … That obviously is the argument that I’m sure you hear all the time, but in this case, what did you want to achieve with this decision where it came to actually exposing this woman to something maybe that she hasn’t thought about?

Kevin Kish: Sure. I should say that in California the law is pretty far reaching and it’s pretty clear. The second you start offering your property as part of the economy, then the fair housing laws are going to apply to you. The exception is if you’re just renting to a single person in the home where you live, then do what you want, but anything beyond that, the laws apply. I think a lot of people don’t understand that.

In this case, the idea of the Asian-American studies course and the volunteer work came from our legal team trying to address what I think underlies a lot of these bias situations, which is really a lack of understanding, a lack of knowledge about the experience and histories of other groups of people. I have to say that this host came into the negotiation, came into a mediation really prepared to confront her own lack of knowledge and bias. As a result, we were able to reach this very creative agreement.

Papantonio: Obviously you closed down this property rights argument, this personal choice argument, this argument that gee whiz, this is how I see the world and I should be able to see the world as I choose. I suppose your argument is a very logical argument, and that is if everybody did that, it would interfere with commerce all over the United States and to some degree I guess the commerce clause comes into this. You say, no it’s not always personal choice. We are a society. We all work together. We live together. It’s important that we all cooperate together in order for commerce to work. I know I’ve heard that well argued. I’m sure your department’s done the same thing.

I’d like to branch out and discuss more broadly a report that your department and AirBnB agreed earlier this year to conduct fair housing tests. Is there a general reason for that? What do these tests look like? What’s your take on this?

Kevin Kish: Sure. This was a pretty unique agreement. It’s the first of its kind that I’m aware of. It’s really showing that there is discrimination on the AirBnB platform, and I don’t think anybody disputes that, including AirBnB. What it means is it’s, it’s not everybody. It’s not most people, but a minority of hosts have been shown to be discriminating against people on the basis of race on this site. Just as in a traditional housing market, that’s of interest to us as a state, because as you just said, if these opportunities are closed off to people because of their race or their religion or their gender or what have you, then we actually create a situation of potential civil unrest. People cannot access services that they’re entitled to. We reached this agreement where we’re going to be conducting fair housing testing in exactly the same way that states have traditionally regulated the housing market by sending testers out to see if someone offering an apartment building is willing to rent to people regardless of their race. That will be done in this case online with profiles.

Papantonio: I’ve got about 30 seconds. I’m always interested in this question. Do you see this as a problem that is increasing or has this always, are we at a level of these type of events staying about the same? Have you seen an increase in this type of thing, say since the beginning of this Trump administration?

Kevin Kish: Sure. There’s no question that the incidence of housing discrimination is far, far lower today than it was in the 1960s when the fair housing laws were passed. With that said, I do think that bias ebbs and flows in us as individuals and in us as a society. Without question, we’ve seen the lid come off a little bit in terms of what people are willing to say and the reasons they’re willing to give for denying people services.