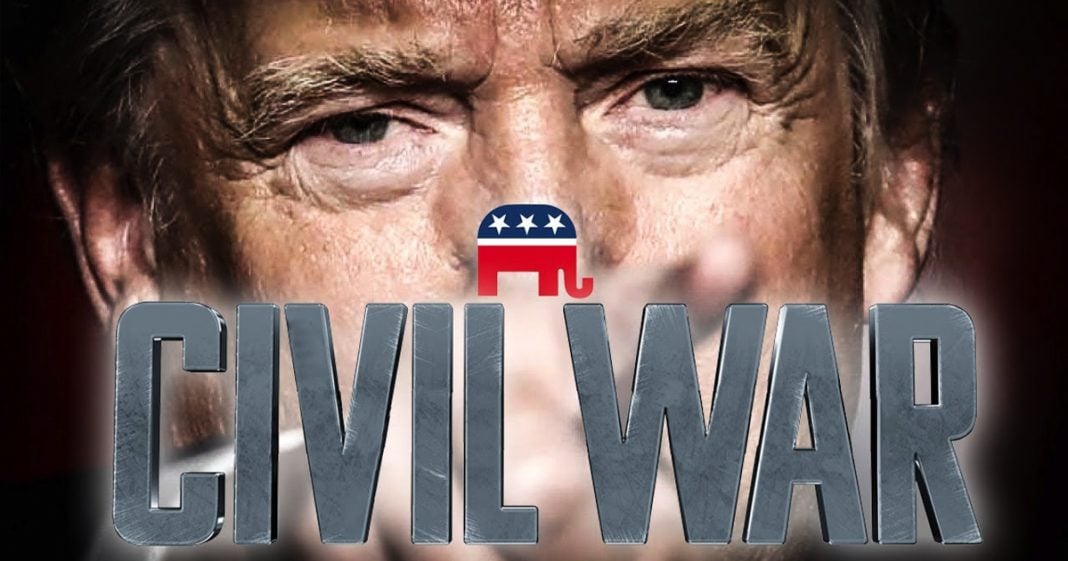 Donald Trump’s attempted public humiliation of his Attorney General Jeff Sessions has reached a breaking point for Republicans, and they are now turning on the President for his constant attacks against someone that the Right absolutely loves. Ann Coulter has suggested that Trump should “man up” and fire Sessions, while Tucker Carlson says he needs to lay off the attacks. Breitbart and Drudge Report are asking the President to stop, while Hannity is pushing for a “repeal and replace” of the AG. Grab the popcorn, folks – this is getting good. Ring of Fire’s Farron Cousins discusses this.

On the one side, on the, “Please stop attacking Sessions and let him do his job,” side, we have Rush Limbaugh, Tucker Carlson, the Drudge Report, and even Breitbart News. They’re all out there saying, “Jeff Sessions is your friend, this is nuts to continue attacking him,” was a phrase uttered on Tucker Carlson’s show on Tuesday evening. And they think that Donald Trump needs to calm down a bit, lay off the Twitter, and just let poor little Jeff Sessions do his job.

On the other side, you have people like Sean Hannity and Ann Coulter who think that Donald Trump actually just needs to, “Man Up,” as Ann Coulter said, and fire Jeff Sessions, put in a new AG who’s going to fire Bob Mueller, and just let everybody go on with their lives. “Jeff Sessions, thanks for your service, get the hell out.”

What’s fun about this is that Jeff Sessions is a horrible, horrible human being who does not deserve, and is not qualified to serve in the position that he is currently in. We all know about his very racist remarks that he’s made in the past, his basic desire to send the United States back to the early 1800’s with his policies … and on the other side, we also know that Donald Trump is pretty much exactly the same. Neither man in this instance is defendable.

Meanwhile, the Trump loyalists just want to be loyal to Donald Trump. That’s it. Sean Hannity cannot come up with an original thought in his head. All he can do is wait for Donald Trump to say something, and then he goes on his shows and repeats the exact same thing, sometimes with different words. That’s all he knows how to do.

So, however this thing ends, it’s going to be bad for the country. Either we’re left with the racist, archaic Jeff Sessions, or Donald Trump finally, “Mans Up,” and fires the man that he clearly, hates, the man he chose for this position, and then we get somebody even worse, like the names being floated right now: Rudy Giuliani, or Ted Cruz. Somebody who would absolutely file Robert Mueller, impede the special investigation, and leave us without knowing what exactly the Trump administration or Trump campaign were up to when they were in all of those secret meetings that they all somehow forgot to disclose.

There’s really no good outcome from any of this, but it is a little bit refreshing to see Republicans going after one another with such vitriol that we finally get to see some cracks in the Republican façade.