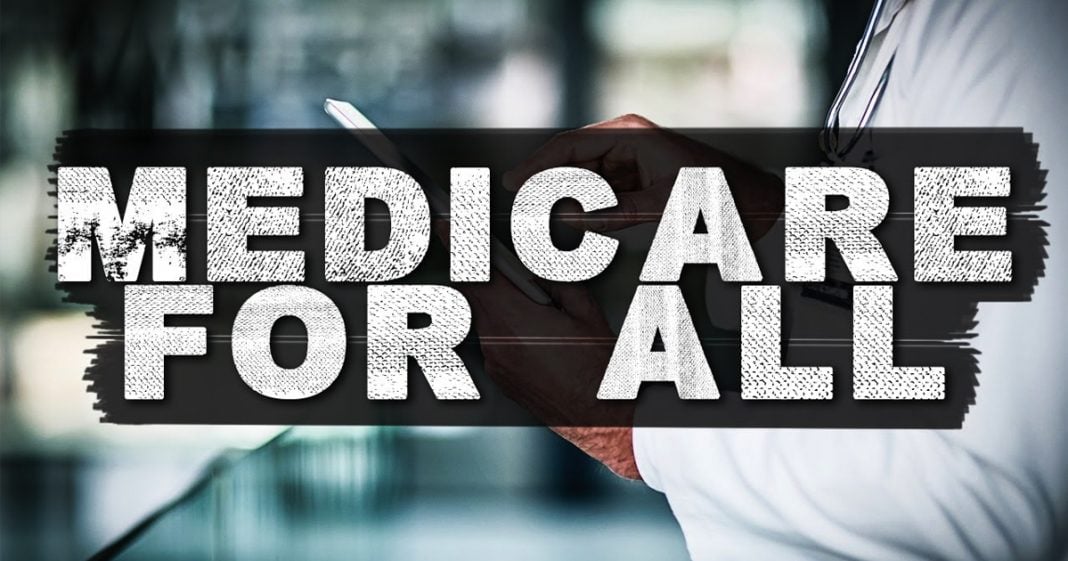 With Republicans trying to take healthcare away from millions and the Democrats in search of a unifying message, there’s one simple solution to both problems: The United States needs to pass legislation creating a Medicare-for-all public health insurance option. That’s a winning message that a plurality of Americans support, so let’s make this a reality. Ring of Fire’s Farron Cousins discusses this.

While Republicans in the Senate are trying to come up with the best way to strip about 22 million people in this country of their health care insurance, Democrats on the other side are trying to craft a message that’s going to resonate with voters in the 2018 midterms and the 2020 presidential election.

Now, so far the messaging they’ve come up with is pretty good. They’re offering Americans, quote, “A better deal.” They want people to see that the Democrats do have plans. “We can talk policy. We’re not just going to attack Republicans. We’re going to come out with something good.”

Well, here is the one thing that can solve all of the problems that we’re currently facing between Republicans destroying health care and Democrats looking for a winning message, and here it is. Medicare for all. That’s it. Three simple words solves all those problems. The Democrats need to be running on a Medicare for all, public option, universal health care … Whatever it is, a plan that ensures that every single American citizen can get health care coverage. And not just a message. There is no reason why Democrats in the House and Senate cannot go ahead and draft this legislation today. At least begin the process. Get it drafted. Introduce it, and then when Republicans vote it down, let them own it and take it back to the voters and show them that Republicans voted against it.

Then, when you finally do regain power, if you regain power, the legislation is ready to go. You can introduce it again on day one. You’re ready to go. You’re not going to sit there like Republicans for seven months saying, “Oh, I didn’t think we’d get this far. Now I guess we gotta come up with something.” Do it today. Show people that you’re serious.

A Medicare for all type plan is the only thing that can fix the broken health care system in the United States. Allow people to buy health insurance through the federal government just like Medicare. If they want to get private insurance, there’s nothing stopping them. They can still do that. You’re not interfering with the free market, you’re just providing a better alternative to a free market that wants to gouge consumers every opportunity they get.

This would help drive down prices. This would help increase competition. It would force companies to lower their premiums, to remain competitive, and I guarantee you they’re still going to be pulling in billions of dollars in profits every year like they are now. You give people a better option. You let them buy it from the federal government. You just straight up take the money out of their paychecks for it. They don’t even have to fill out any paperwork, send in a check, or whatever. Private health insurance companies already are allowed to do that. We’re allowed to have pension money come out of our paychecks that go to private entities, so why not money that, instead of going to a private health insurance company, is going back to the federal government to buy health insurance should a person opt into that.

Unless that happens, unless we have a viable choice from the federal government, we really don’t have much choice. We’re stuck with either what we get through our employer, or what we’re able to buy on an exchange. We don’t have a cheaper alternative. People who are already healthy who may not need as much coverage could opt into this instead of having to pay the pricey plans that they’re paying for now.

That is the only way. A Medicare for all option is inevitable in this country, so we may as well go ahead and get it started now.