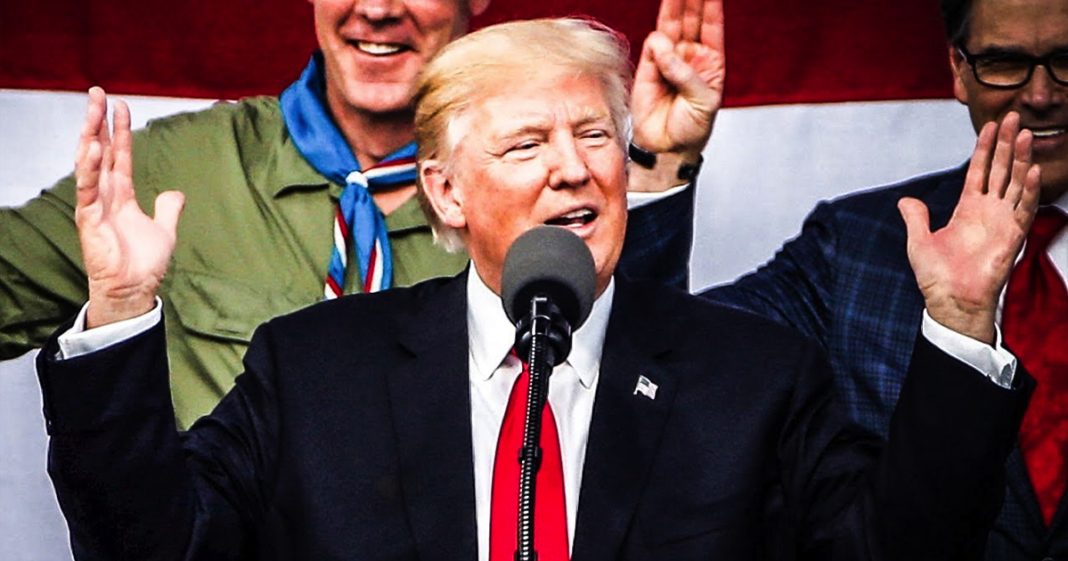 On Monday, Donald Trump addressed the Boy Scouts Of America’s National Boy Scouts Jamboree, where he managed to get children to applaud the idea of destroying the Affordable Care Act. In addition, he got the crowd to boo Hillary Clinton and Barack Obama, and went on a tirade about Fake News. These were children, and Trump saw no problem indoctrinating them with his lies. Ring of Fire’s Farron Cousins discusses this.

On Monday, President Donald Trump spoke to the Boy Scouts of America’s National Boy Scout Jamboree, where thousands of young men in that audience along with their parents, got to hear the president make claims like this.

President Donald Trump: We put aside all of the policy fights in Washington D.C. you’ve been hearing about with the fake news and all of that. We’re gonna put that aside. Secretary Tom Price is also here today. Dr. Price still lives the scout oath helping to keep millions of Americans strong and healthy as our Secretary of Health and Human Services. He’s doing a great job and hopefully, he’s going to get the votes tomorrow to start our path toward killing this horrible thing known as Obamacare that’s really hurting us.

You know after seven years of saying repeal and replace Obamacare, we have a chance to now do it. They better do it. Hopefully they’ll do it.

Each of these leaders will telly you that their road to American sex and you have to understand, their American success and they are a great, great story.

The fake media will say, “President Trump smoked,” and you know what this is, “President Trump spoke before a small crowd of Boy Scouts today.” That is some crowd. Fake media. Fake news. By the way, just a question. Did President Obama ever come to a jamboree?

Now, it’s important to point out, once again, that the majority of people in this audience were children. They can’t vote. They will not be able to vote for many years. Hopefully by the time most of them are eligible to vote, Donald Trump will no longer be the President of the United States. Furthermore, given their age and education levels, even if they get the best possible education available to them, most of them have absolutely no idea what the president is talking about. Yet, still, for some reason, they decided to cheer him on. Those chants of U.S.A., U.S.A. Cheering when he attacks President Obama and booing a past president. I mean if this reminds you of those Hitler youth rallies that we learned about, it’s because it’s pretty much identical, I guess.

That’s what Donald Trump was doing. He was indoctrinating these young children with his backwards, biased, pro-rich, anti-working class, poor policies. And they ate it up. You know why? Because according to analysis of Donald Trump’s speeches, he actually speaks at a fourth grade level. So, he was right on the level with these kids. They understood every word, may not know the issues that he’s talking about in-depth, but then again, neither does Donald Trump himself. But that’s what so disgusting about this.

Furthermore, Donald Trump could not hold a coherent thought for more than a few seconds before going into some other tirade about fake news or Obama or Hilary or whatever is going on at the moment with him. This was a disgusting speech. It was disgusting to see these children react the way they did to this speech. Tuesday morning after the speech, parents began to speak out, they were disgusted with what Donald Trump did there and I’m sure a hell of a lot of parents had to bring their kids home and explain to them that that is not the way that a normal grown up behaves.

In the past, presidents who addressed this jamboree spoke about things like leadership, community service, commitment to country. Republican or Democrat, they did not use the opportunity to bash the opposition or to indoctrinate these children. They tried to inspire them to just be decent human beings, but since Donald Trump himself is not a decent human being, he didn’t know how to do that. So, again, he goes on this incoherent rambling spree where nothing makes sense, nothing ties together, it’s just a word salad that he’s thrown together that really reminds you of this particular incident.

Sarah Palin: Are you ready to make America great again? You rock and rollers and holy rollers! You know what, you guys haven’t tried to do that every day since that night in ’08. When I was on stage, nominated for V.P. and I got to say, “Yeah. I’ll go. Send me. You betcha. I’ll serve.” And, like you all, I’m still standing. No more pussyfooting around.

Can I get a hallelujah?

Sarah Palin: He, better than anyone, isn’t he known for being able to command fire? Are you ready for a commander in chief? How about the rest of us, right-winging, bitter clinging, proud-clingers of our guns, our God, and our religions and our constitution. Tell us that we’re not red enough? Yeah, coming from the establishment. Right.

Donald Trump should never be allowed to speak to children. He isn’t good at it. He doesn’t know what he’s talking about and he’s confusing thousands of children in the process. He and Sarah Palin are exactly alike. People like that, should not be allowed to address crowds in the United States for any reason whatsoever. All they do is lie and misdirect from things that are actually important.