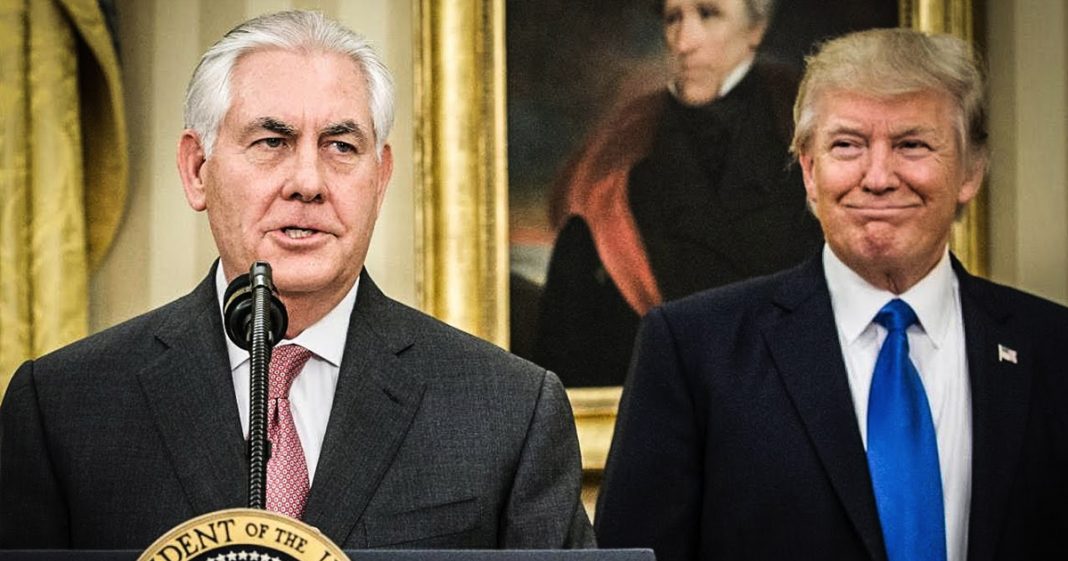 Secretary of State Rex Tillerson is allegedly considering quitting his post after he came to the realization that Donald Trump was “unprofessional.” What finally sparked this revelation in Rex Tillerson? The President’s relentless Twitter attacks on Attorney General Jeff Sessions. Looks like Rex Tillerson finally started paying attention, because he missed plenty of other “unprofessional” moments from Trump’s term. Ring of Fire’s Farron Cousins discusses this.

According to reports, Secretary of State Rex Tillerson is allegedly debating whether or not he should quit his post as Secretary of State because he now sees that Donald Trump is unprofessional. So what sparked this sudden realization that the President of thE United States is acting like a giant child?

Well, according to sources, Rex Tillerson is upset about Donald Trump’s constant attacks of Attorney General Jeff Sessions on Twitter.

Now, the attacks on Jeff Sessions have been all over the news. I’m sure everybody’s familiar with it. Trump is trying to insult Sessions so that he quits his job, meanwhile Jeff Sessions refuses to step down. Tuesday morning, his aides say that he was in his office at 6 AM, hopped on the treadmill for a little bit, then got straight to work.

There’s a big showdown happening between those two, because Trump is accusing Sessions of being weak against Hillary Clinton and the Ukraine. Being weak on the Russian probe. Being weak on everything. Real ineffective leader. Sad! Those are the kind of things that Donald Trump is saying about Sessions. Sessions, meanwhile, is just trying to take the country back to the early 1800s without Trump’s interference.

Both horrible men. Really would be best for the country if neither of them were holding office. But nonetheless, back to Tillerson. Tillerson views these attacks on Donald Trump as unprofessional and childish, which they absolutely are. But to that, I have to ask Rex Tillerson: where the hell you been, buddy? Just now, like these attacks on Jeff Sessions are what pushed it over the line? Donald Trump attacking somebody as incompetent, who is clearly incompetent, but for other reasons?

That’s the line for you? You didn’t have a problem with him saying that he likes to grope women by their genitals or forcibly kiss them, even when they don’t want it, because when you’re rich, they let you do that? That is what he said. Those were his words. You had no problem with him calling out TV hosts for their appearance? He did that with Chuck Todd, Mika Brzezinski and a whole host of others.

Those were okay and totally professional to you? But saying that Jeff Sessions is doing a crap job, that’s where you draw the line? What kind of camaraderie do you even have with Jeff Sessions? This is a very peculiar story, because if you think Donald Trump is unprofessional, one of the things to make you think that should have happened months ago. It wasn’t just the Jeff Sessions thing. It’s literally everything this man has done since being sworn in on January 20th. So either Rex Tillerson has been absolutely asleep or he hasn’t been paying attention or maybe he doesn’t even use his own Twitter account, or get online at all. But something is wrong with this man if he’s just now understanding that Donald Trump is not presidential.

Or, and here’s the more likely thing. Rex Tillerson is using that as cover so that he can quietly walk away from his position, seeing as how the company that he ran is now under fire for violating sanctions against Russia by selling them oil. They found themselves in a ton of hot water, hot water that eventually will rise to the level of Rex Tillerson, because he was CEO of the company at the time. So, that’s my bet.

Rex Tillerson doesn’t care what happens to Jeff Sessions. He doesn’t care what Donald Trump says to him. He just needs some kind of reason to back away from the administration before he finds himself indicted or under investigation for the laws his company broke while he was the CEO.