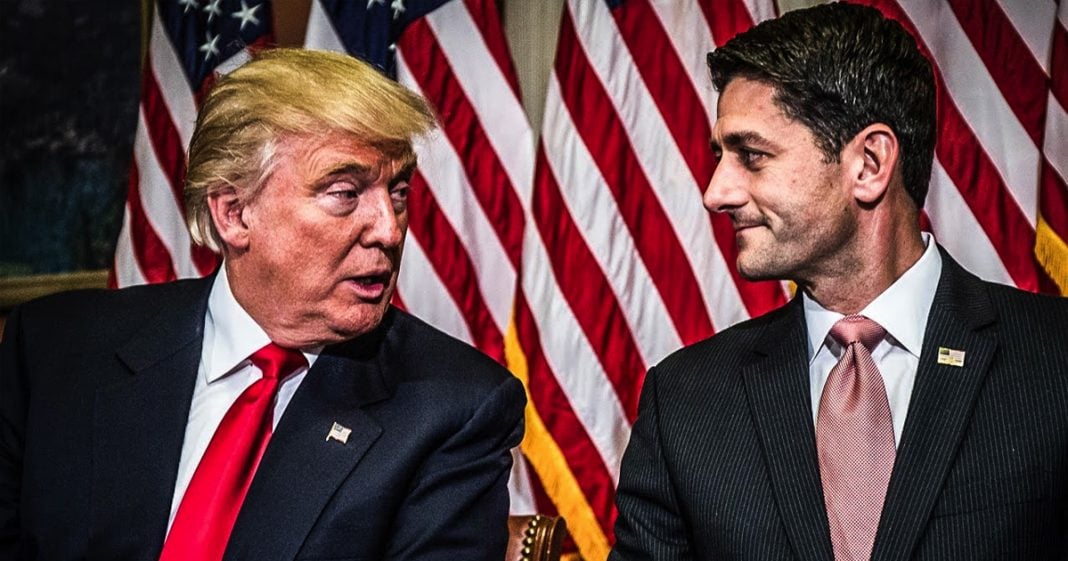 On Sunday, Paul Ryan directly contradicted a Donald Trump talking point by saying that Robert Mueller, the special prosecutor investigating Donald Trump, is not a partisan hack seeking to destroy Trump. It would appear that Donald Trump is losing support from the only people standing between him and impeachment, which could be the beginning of the end for Trump’s presidency. Ring of Fire’s Farron Cousins discusses this.

Donald Trump has been relentlessly attacking special prosecutor Robert Mueller in recent days trying to undermine the ongoing investigation into the Trump campaign, Trump administration, and any contact/possible collusion with Russia or any foreign agents of Russia. So the Trump administration has been trying to drag Mueller’s name through the mud, claim that he is some kind of Democratic partisan hack who’s just on a witch hunt to destroy a Republican president.

Then this past weekend, Mueller found a very unlikely ally coming to his defense in the form of Paul Ryan, House Speaker. Paul Ryan came out in the media and directly contradicted Donald Trump’s statements by saying that, “No, Bob Mueller is not a partisan hack. In fact, he is a Republican whom we all respect. He is a Republican who was appointed by a Republican to serve in a Republican administration,” Paul Ryan said. “And so we respect him. We understand what he’s doing, and we understand the importance of it.”

This is a turning point for Republicans in Washington, DC. Paul Ryan, obviously the leader of the House of Representatives, now contradicting the president and coming to the aid, to the defense of the special prosecutor to hail him as a some kind of Republican hero. What this means is that the main guy standing between Donald Trump and impeachment has turned on him. If Paul Ryan is putting more faith into the special prosecutor than he is to his Republican president, that tells you something. Paul Ryan is laying the groundwork to eventually, or at least to be prepared to have to do so, go forward with impeachment against Donald Trump. He’s trying to say all these things, that Mueller’s a Republican, he worked for Republicans, was appointed by Republicans, has always been a loyal Republicans, to gain over respect and trust and approval of other Republicans in this country.

Now, all those things are true about Mueller, but that doesn’t matter for what this investigation is or what it’s doing. But he is trying to convince everybody else out there that, “Listen to me. Mueller’s a good guy. He’s a good Republican. He’s on our side. If he finds something on Donald Trump, we need to listen to him because he’s a better Republican than Donald Trump, who used to be a Democrat at some point and flipped, blah, blah, blah.” Paul Ryan is laying this out. He might be an evil man, but he’s not a completely stupid man. He knows exactly what he’s doing, and there is more to this than just him coming to Mueller’s defense. He is working to set the framework, if necessary, to get the public, the other Republicans to go with him on impeachment should it happen or when it happens. That’s what we’re seeing today.

Of course, Donald Trump, not the brightest bulb, is out there constantly attacking people like Paul Ryan and Mitch McConnell, who the Senate will be the ones to vote whether or not Donald Trump gets removed from office should he be impeached by the House. Not a good idea to alienate and attack and insult your only allies in Washington, DC, who could literally be the ones who decide whether or not to end your career. Paul Ryan, I think, at this point is understanding the power that he has. And I think he’s beginning to understand that if he impeaches Trump, it’s not going to hurt the Republican Party as much as he thinks if the Republicans are the ones to stand up to the corruption and actually move forward with impeachment before the Democrats get the chance to do it.