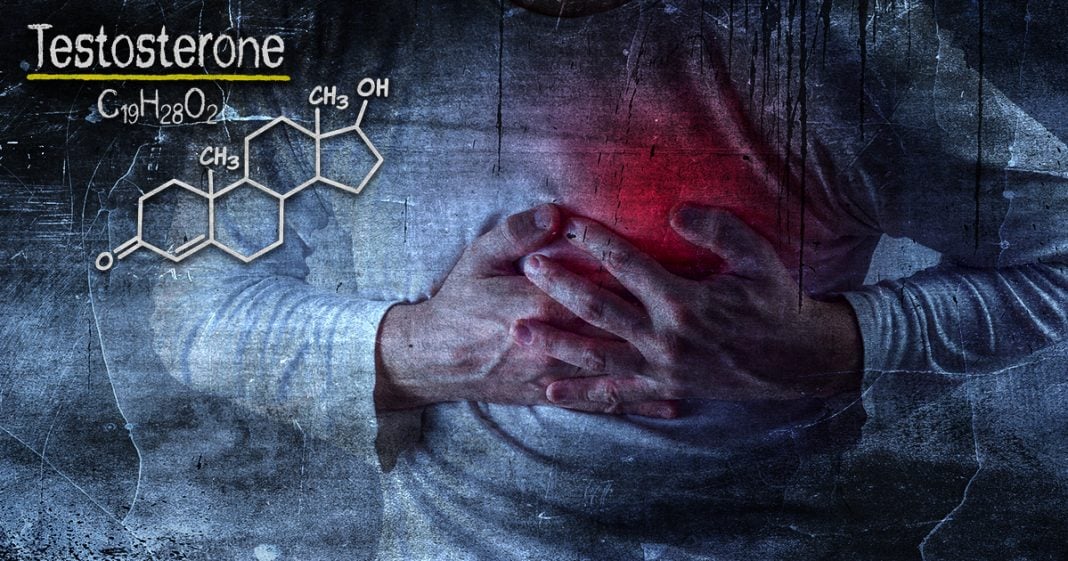 In just a few months juries around the country will begin hearing cases against drug maker AbbVie about the dangers associated with their testosterone treatments. According to those lawsuits the testosterone treatment AndroGel has been linked to a big increase in the risk of heart attack and strokes in men who use that product. The AndroGel story’s different from many other dangerous drug stories because of the complex deception that took place by the company. Not only did the company hide the deadly dangers of their blockbuster product, but they had a fantasy marketing campaign to sell AndroGel to people who absolutely didn’t need it. On top of that, the Federal Trade Commission has accused the company of payoffs to competitors in order to keep competition out of the testosterone market.

Mike Papantonio: Let’s start with what the company knew about testosterone therapy first. The company was well aware of the fact that clinical trials of testosterone treatments in older men had to be stopped early because of the spectacular risk of heart attacks and strokes on those people being tested. Testing told the company that the product was so dangerous that clinical studies had to stop. Fast forward five years and the FDA decided that even they couldn’t ignore the dangers of the testosterone treatments like AndroGel anymore. They demanded the company include extraordinary warnings on their product about heart attacks and strokes from using those products even as directed. So far, this is your typical big pharma story. A drug maker sees bad results but they keep the product on the market anyway and they keep it all quiet.

Here’s where things get really disgusting. You see, testosterone treatments were originally designed only to help aging men who were suffering from dangerously low levels of testosterone. That’s only a tiny market for a drug company wanting to make billions, so they launched a slick advertising campaign to convince men of all ages that any problem they could be having in life, whether it was loss of libido, weight gain or fatigue or muscle loss, all these things could be fixed with their snake oil. Their big scam ad campaign worked. The company soon saw their yearly sales top $1 billion, but for big pharma, that still isn’t good enough. According to a lawsuit filed against AbbVie by the Federal Trade Commission the company began bribing competitors to keep their product off the market. This is what the FTC has called pay to delay scams. That lawsuit is still pending today.

AbbVie could face as many as 6,000 lawsuits from men who were duped and injured by the company’s dangerous product. I’m joined now by Robert Price to tell us the AndroGel story. Robert, thanks for joining me. The AndroGel testosterone story has so many different levels to it. Let’s start with the basics, Robert, of what this case is about. What do we know about the dangers of testosterone treatments?

Robert Price: Mike, thanks for having me on the show. The basics we know is that testosterone is a therapy used to treat men with testosterone and hormonal disorders. Basically, if your body has too much testosterone in it you’re at a dangerously high increased risk of heart attacks and strokes and cardiac events. That’s why we’re here today. We have been engaged in a years long battle with pharmaceutical companies such as AbbVie for improperly marketing and distributing dangerous testosterone therapy to men who essentially didn’t need it. That’s why we’re here today, Mike.

Mike Papantonio: Robert, is there any question that the company was aware of the dangers? That they had all the material they needed that showed that it caused strokes and heart disease, I mean, heart attacks, really. Is there any question about that?

Robert Price: Absolutely not. There’s so many different signs, so many things that are wrong here. First of all, you have companies like AbbVie with this AndroGel system. This quick delivery, this rapid high-dose delivery system where they’re rubbing it on their arms or their shoulder or their armpits. It’s going directly into the system. These companies, especially companies like AbbVie knew about it. They had early signs. They had clinical trials that had to be stopped due to safety concerns.

This is something that the companies knew, they knew it early on, and as we see all so often, they’re able to get this by the FDA by using limited studies. Studies that are not wide enough, they don’t apply to enough people such that we know what’s going to happen when it’s in the general population. Then you got the usual story with the FDA, which these drug companies are in such a power position, they have so much money, they have so many resources, and the FDA is the opposite. The FDA has thousands of drugs, thousands of cases, thousands of files, and they’re able to prepackage, they’re able to cherry pick and pick and choose what they want to present to the FDA. The FDA …

Mike Papantonio: Okay, well let me ask you this. Let’s talk about the marketing schemes AbbVie devised for this product. Originally the product was only meant to be used for aging men who had dangerously low levels of testosterone. There’s no question about that. It was very clear. The company soon realized that they could peddle this product to men as, really, a fountain of youth. Buy AndroGel, put it on your body, and everything’s going to do better for you in your life. That was the way they sold this product. It was a campaign that made them more than $1 billion a year doing that. Talk about the way that they approached this. Is it typical that we see in pharmaceutical company, the way that they go about promoting a product?

Robert Price: Absolutely, sure. You hit the nail on the head. So many of men that had this therapy and have been injured by this therapy don’t need it in the first place. As you mentioned, this testosterone therapy, this is something that had been out for decades, but until these pharmaceutical companies like AbbVie started this new system, started this new marketing stuff, it was just for people with a condition called hypogonadism, or dangerously low levels of testosterone. What pharmaceutical companies are able to get away with doing, and we see it here and it blew up, is this what they call disease state promotion.

The FDA will let a drug company get away with doing this disease state thing. “Hey doctors, we’re not exactly directly marketing, but you need to know about something called low T.” They blast the airwaves, they send their detailers into these clinics and they say, “Hey, are you 40 years old? Are you tired? Do you not feel like you used to?” Basically any men over 35 years old are going to say, “Yeah, I’m tired. I don’t feel like I used to. I don’t feel like a young kid again.” Anybody statistically, when you hit your mid-30s, most people are going to see a general, normal decline in testosterone. These are the people that are having this testosterone therapy prescribed to them that don’t need it. They’re going to these clinics and they’re hearing this message.

Mike Papantonio: Robert, it sounds to me like what they were actually doing is inventing diseases. In other words, if you’re tired it’s a disease. If your libido is low, it’s a disease. We see the pharmaceutical companies nowadays, because the markup is so high. You see markups of 2,000%, 3,000% on one pill. They understand if they can get that pill into the market, all of a sudden they invent a disease, the pill’s in the market, and they are on easy street by way of creating these cash cow products. In this case we saw another thing. We learned that the Federal Trade Commission was concerned that what AbbVie was doing was they were keeping competitors out of the market by buying them off. Tell us about that lawsuit that the Federal Trade Commission has gone forward with. It’s pending right now.

Robert Price: Yeah, it’s just true greed in its making. Essentially what AbbVie did is, in America you have a limited amount of time to have this cash flow. You’ve got, generally it’s 10 years, your patent, you’ve got exclusive rights on a certain formula of something. This is when the drug company makes their money. If they can get a few more years on their patent, that’s billions and billions of dollars to them. What they did is they basically invented a lawsuit. They sued a couple of generic drug companies under false pretenses. They said, “Hey, you know what? You’re infringing,” it was a patent infringement, “you’re infringing on our molecule. You’re infringing on this delivery system.” Completely baseless, no grounds for it.

What that does, here’s the kicker. When that happens they get an instant, it’s a 30 months, over two year stay. They cannot go in and actually sell generic testosterone. They can’t take AbbVie’s product and go market it. They’re in jail. Not in jail, but they’re stayed. The can’t do it anymore. What AbbVie does is they make a false lawsuit and they say, “Okay guys, you generic drug companies, we’re going to hit you. If you want to make the big bucks, we’ll let you out of this. You got to pay us a certain amount of money,” it’s called pay to play. Hit them with a fake lawsuit, make them pay to get out of it, so they can do to do what they should have been able to do in the first place, which is to be able to do a generic buy and sell on this testosterone therapy. The FTC saw it and said, “This is bogus, this is absolutely untrue.”

Mike Papantonio: Yeah Robert, one thing we see happening, these drug companies make so much money that what we’re seeing, and I think we’re seeing it here, too. If they make $1 billion a year for three or four years, and they understand they’re going to make billions of dollars, and they understand at the end of it, yes, they’re going to kill some people. Some 49 year olds are going to have heart attacks, they’re going to have strokes, but they then calculate how many are going to die and then how much can we pay for those deaths. Then they take that number and they compare it against the billions that they make, and if it only costs them $1 billion, but they’ve made $10 billion, they think that’s a pretty good idea. How often have you seen that in your practice, and is that the way this is looking in this case?

Robert Price: Absolutely. I mean, I say this, it’s tragic, but it’s what I do. It’s what a lot of pharmaceutical lawyers do. It’s like you said, it’s arithmetic. They get that 10 years or whatever it is for that patent, they go and sell it. They figure if they can make $10 billion and sure, they’re going to hurt some people, sure they’re going to get sued, but if they can resolve the litigation for $1 billion or $2 billion, that’s $8 billion profit in their mind. That’s when you see a story like this. You don’t actually get the data, you don’t actually get the studies. The proverbial mess doesn’t hit the fan until eight years into it, billions of dollars into it.