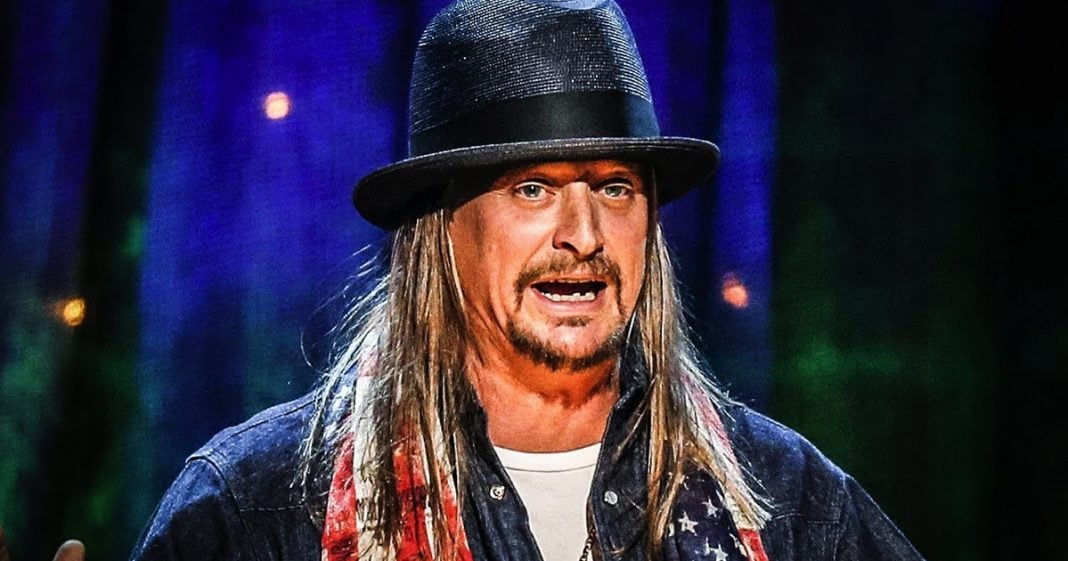 Singer Kid Rock is toying with the idea of running for Senate in the state of Michigan, and according to GOP consultants in the state, he’s the favorite to win the seat currently held by Democrat Debbie Stabenow. In fact, the polls currently show him with a 4-point advantage over Stabenow. Is Idiocracy here to stay, or will Senator Kid Rock give Americans the wake up call we need to get rid of the know-nothing pseudo-celebrity political trend? Ring of Fire’s Farron Cousins discusses this.

In what might possibly be one of the most disgusting and saddest stories I’ve ever had to talk about here at Ring of Fire, Kid Rock, the musician whose real name is Robert Ritchie, is toying around with the idea of running for Senate. Well, okay, that’s part of the story. Recently, polls came out in the state of Michigan where Kid Rock would be running against Democrat Debbie Stabenow, and it shows that at present, Kid Rock, who has not officially launched a campaign, even though he does have a website, Kid Rock for Senate, he’s actually beating Stabenow right now by four points in polls.

Now, I understand people today don’t like to trust polls. I get it, and I know it’s way too early. But this man, Robert Ritchie, Kid Rock, could easily become the next Senator from the state of Michigan. According to GOP consultants in the state of Michigan, as long as he doesn’t get caught in bed with a little boy or beat up a woman between now and August 2018, he’s gonna win the nomination for that seat. Now, those were actually their words. They said, “Don’t get caught in bed with a little boy, don’t beat up a woman and you’ve got this.” The reason they say that is because that frequently does happen with Republican candidates, so they’re not too far out of let field coming forward with that information for him.

What’s really scary is that Kid Rock is not a smart human being. He’s not a decent human being. He’s not even a fairly decent musician, and he could become a United States Senator. A lot of people out there are already coming up with headlines, saying, “We’re headed straight towards idiocracy! Reality TV star in the White House, failed musician running for Senate. We’ve never seen this before!” Well folks, remember, we actually have. Remember Sonny Bono from Sonny and Cher? Yeah, he was elected to Congress. Ronald Reagan was an actor before he went into politics. This really is nothing new. We’re seeing history repeat itself at this point.

The United States has been like this for quite some time. Of course, those men, arguable, I guess, weren’t necessarily as horrible and evil and disgusting as people like Kid Rock and Donald Trump, but they were still pretty bad. Completely unqualified for the positions which they held, yet somehow they won over the trust of the voters anyway.

Kid Rock Friday evening tweeted out a picture of a tiny little hamburger and a beer saying, “Yeah, this is my dinner. What are Schumer and Stabenow having?” Then he ends up just getting roasted for the fact that he’s sitting down eating a tiny little kids meal burger before 5:00 pm on a Friday evening, as if he’s trying to get some kind of early bird special. People around the country don’t necessarily like him. They wouldn’t vote for him, but in Michigan he’s currently winning and he hasn’t even officially launched a campaign.

This is scary, folks, and I know we’ve seen situations like this before, but of all the people in the world to be considering for Senate, I think Kid Rock should probably be one of the last people on that list. Go back and listen to some of his lyrics, if you can stand it for a minute, and just think about the things that he says, and understand that this man might soon, in a year and a half, be taking the oath of office to be a United States Senator. That’s a pretty scary thought.