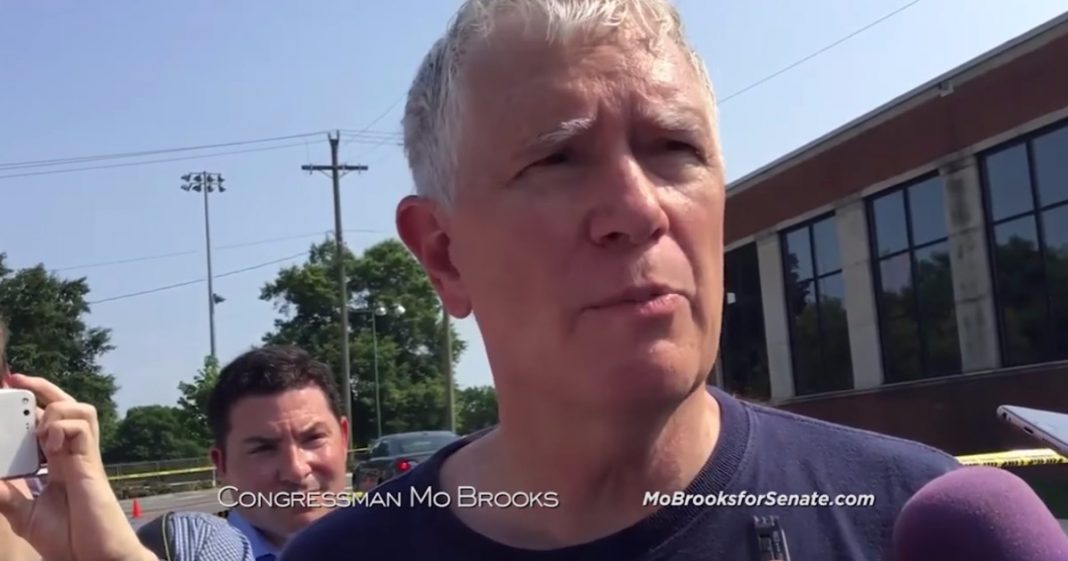 As the political climate grows more and more hostile, the ads candidate use to separate themselves from their political opponents are bound to grow darker and more inappropriate by the year.

Though we have seen quite a few of these inappropriate ads like the one from Jeb Bush in 2016 when he used footage of Terry Schaivo to bolster his political image, none have stooped as low as Congressman Mo Brooks.

This week, Brooks released a new political ad for his re-election campaign using audio from the shooting of his colleague Steve Scalise in order to attack Democrats and the media. Yes, the very colleague who is still in the hospital on the long road to recovery as a result of that shooting is now being used as an overt political ploy.

But Brooks’ use of the footage doesn’t rail against political extremism, gun use, or any other relevant aspect of the Congressional Baseball shooting; instead, it reduces the event to one of partisanship and an attack on the media.

The ad opens with a dark screen, the smattering of gunfire can be heard in the distance. On the blank screen, the gunman is identified only as a “Bernie Sanders Supporter.”

Brooks, who assisted Scalise in the immediate aftermath of the shooting by reportedly providing his belt as a tourniquet, is hailed. Then, the ad focuses on the media.

“Mo Brooks gives his belt as a tourniquet to help the wounded. What’s [sic] the liberal media immediately ask?”

Then, footage of Brooks answer media inquiries, among which is a question about how he views current gun laws in the immediate aftermath of an act of gun violence. Though Brooks willingly provides a full response to the question, the ad is clearly trying to position the inquiry itself as wholly inappropriate.

But then again, if Brooks felt the media’s inquires were so inappropriate, why did he bother answering them?

Oh yeah, so this overt and inappropriate political ad could be made. Of course.