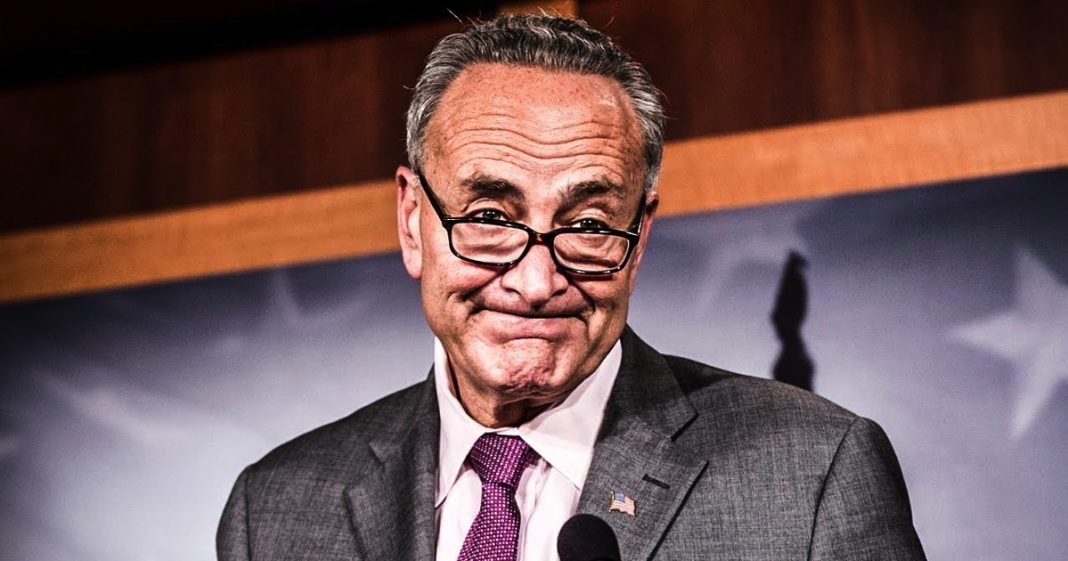 In a very rare moment of self-awareness, Senate Minority Leader Chuck Schumer admitted in an interview with The Washington Post that the Democratic Party’s loss in the 2016 presidential election wasn’t because of Comey or Russia – It was because the Democrats ran a bad campaign. Does this mean Democrats are finally waking up to the cause of their failures? Ring of Fire’s Farron Cousins discusses this.

Something very odd has happened to the Democratic party in the last few days, and that odd thing is they actually seem to be gaining a little bit of self awareness. Senate minority leader Chuck Schumer gave an interview to the Washington Post recently where he admitted that it wasn’t James Comey’s fault. It wasn’t the fault of the Russians. It was the Democratic party’s own fault, and that they needed to blame themselves for their 2016 presidential election losses. He said when you lose to a candidate who only has a 40% approval rating, there is nobody to blame but yourself.

He’s absolutely right, obviously, but the question is why is Schumer finally understanding what the rest of this country has been screaming since the election? If you want to win, you’ve got to run on issues. You can’t simply run on the fact that you are not your opponent, which is what happened in 2016, and that’s one of the reasons we lost. Democratic party only talked about issues 25% of the time. Chuck Schumer either is finally understanding that or realized that he cannot continue to be an effective leader, to gain new voters to the Democratic party unless he comes out and publicly admits what most of us have been screaming about for eight months.

Now, in addition to Schumer’s statement that the Democratic party needs to blame themselves, the Democrats have actually crafted a new message that is far more populaced than anything they have talked about in the last decade. They say this coming election is going to be about jobs. It’s going to be about focusing on the middle class, talking to people, getting involved, fighting back against Republican policies that are designed to hurt the poor and the working class while helping only the one percent.

Now if that sounds familiar, it should, because that’s exactly what Bernie Sanders has been saying since the first day he came to the Senate. Democrats finally understand, you know what, that’s a winning message. We see poll numbers. We understand what’s happening. We finally understand why this guy, Bernie Sanders, is so damn popular, so we’re going to do that and come up with this new message. Well that’s great. That’s what we’ve been waiting for.

But there’s a problem. There’s always a problem. So far, it’s just a message. It’s not a plan. It’s not a set of policy proposals. It’s just a new message. Until the Democratic party steps up, balks at their corporate donors, stops taking their money, start enacting some of the policies that they’re out there saying they may want to do, propose some legislation that actually helps workers, until then all of this is just talking points. That isn’t good enough.

If the Democrats truly want to win in 2018, they have to basically do what they’re already talking about doing. I know you can’t get it passed, but you can propose it. You can write it, you can sponsor it, you can introduce it, and then let the Republicans take the fall for failing to pass it. Have something that you can show voters and say look what I tried to do, but I couldn’t because of the Republicans. We get rid of them, and this, this piece of legislation, whatever it is, will become a reality. That’s how you win over voters. Not with talking points, but with action, with evidence, with genuine concern proving to them that you absolutely mean what you’re telling them. Until then, until you do that, you’re going to continue losing.