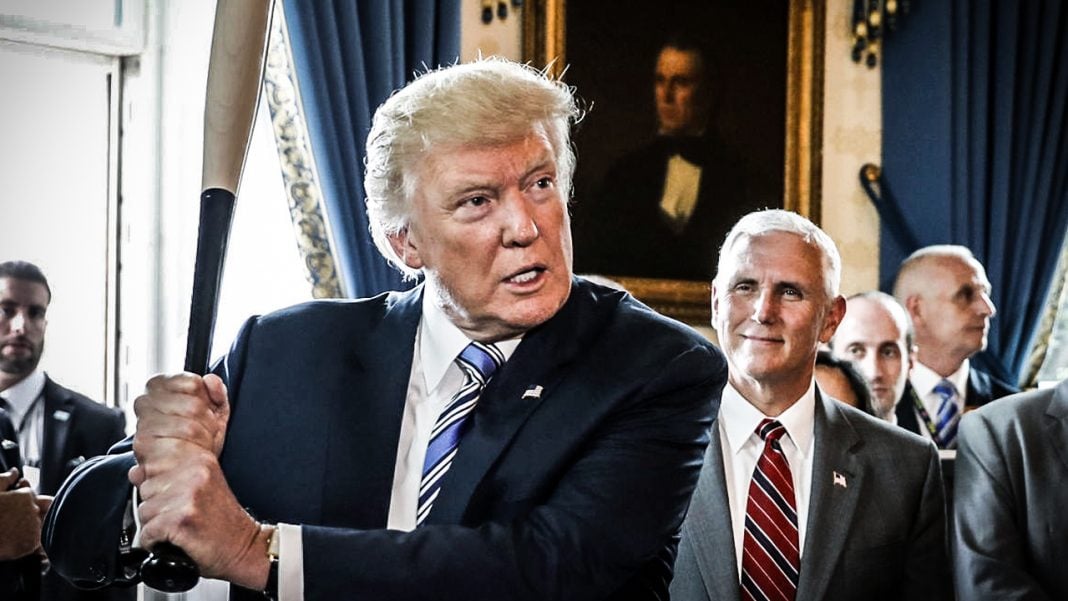 Donald Trump hailed this past week as “Made In America Week,” and while the public was cheering the President for being such a stand-up guy, he quietly requested an additional 72 H-2 Visas for foreign guest workers on his properties.  He can’t even pretend to support American labor during a week that’s meant to promote American labor.  He is a joke, but no one is laughing. Ring of Fire’s Farron Cousins discusses this.

One of my favorite and one of the most annoying things about Republicans in the United States is that they seem to be completely immune to any form of irony. Here’s a great example that happened just this week. On Monday, Donald Trump, his administration announced this was Made in America week. We were going to celebrate products made in the United States, American labor, everything having to do with American workers and American products, America, America, America. That is the Trump way. Well, then actually on that exact same day, the Department of Homeland Security upped the number of H-2B visas given to foreign workers allowing them to come over to the United States and work seasonal jobs. They upped that from 66,000 to 81,000, so on the very same day we’re supposed to be celebrating American labor, the Department of Homeland Security says, “We’re going to bring in more foreign low-wage labor.”

That’s not even the best part. The best part is that on Thursday the Trump Administration, Donald Trump’s businesses, applied for 72 of those visas to go and work down at Mar-a-Lago and a few other Trump-owned properties, so on the very week that the president himself says we’re supposed to be promoting and supporting American labor and American-made goods, he files an application to hire 72 non-American workers at his own properties. Again, Republicans are immune to irony. If you were to tell that story, show them the evidence to a Donald Trump supporter, they wouldn’t think it’s a big deal. They’d say, “I don’t get it. I don’t understand.”

Donald Trump wants us to think that he is this uber-hardcore American who bleeds red, white, and blue, loves American labor, wants to bring back American jobs, only wants to use American-made goods, yet every decision he has made as president of the United States and as a businessman shows the contrary. His goods are made overseas. His hotels, his properties, his golf courses are staffed with foreign workers. The projects he’s approved in the United States where he swore up and down we were using American products to do it, like the Keystone XL pipeline, that pipeline’s going to be made with Russian steel. Nothing Donald Trump has said about supporting American labor, workers, or jobs, or products is true. He has lied to people up and down and his supporters refuse to acknowledge the reality that he doesn’t care.

I mean, I get it. I get the fact that Donald Trump wants to use cheap labor so he can make more money. It’s unethical. It’s not illegal. It’s crappy, and it’s anti-American, but couldn’t you have just waited three frigging days? Couldn’t you have done it not in Made in America week, so that you didn’t look like such a dumb-ass? Or is that just completely beyond your comprehension to not look like a blithering idiot all the frigging time, because that’s what you are, and this isn’t even the first time that Donald Trump has had to file to bring in more seasonal foreign workers to his property, specifically Mar-a-Lago. He did it a couple months ago, and he’s going to continue doing it.