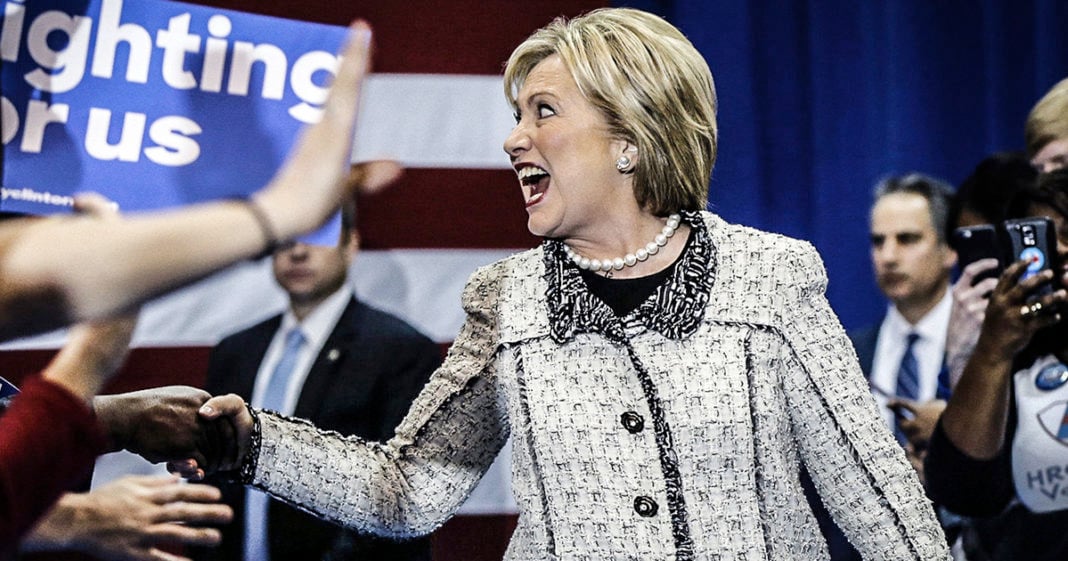 We have three different groups of people right now talking about Hillary Clinton. First of all, the Trump folk, the Republicans. Trump is out there tweeting out on a near daily basis, “Hillary did this thing with the Russians, why aren’t we going after her?” So the Republican base says yeah Hillary for jail. Let’s investigate her. Let’s do all these things. The investigation that took place before was fraud, it was a sham. Well no, it wasn’t. Hillary Clinton, in spite of being a horrible candidate, she did go through hell with these investigations. No evidence came up, it’s over. That’s how investigations work. You may not like it, but that’s the U.S. system of justice. Justice was served. Justice was done. She was free to go. Republicans, let it go. There is no reason why any of you should ever utter the name Hillary Clinton again.

Now the second group, the kind of hard core progressives that are still out there saying Hillary Clinton should be prosecuted. No. Why? Why are you still talking about Hillary Clinton? How is she relevant to what is happening in this country today? She lost the election. She was a bad candidate, I agree with you. She ran a horrible campaign, I agree with you. She was the wrong candidate, I agree with you. But let it go. There is nothing productive, nothing of substance that comes out of hammering on Hillary Clinton every day, just bashing her, beating her up. Move on! There are plenty of people in D.C. on both the left and the right that we can talk about all day long, people that actually are writing laws, doing things that affect our daily lives. Instead, some people feel that their time is better spent going after a woman who’s not even in politics anymore, hopefully will never be again in the future. She’s just out there doing whatever.

That brings me to the third group of people. The I’m still with her people. I appreciate your enthusiasm for a candidate. I get it, I do, but when you’re out there actively attacking people like Bernie Sanders to make yourselves feel better. Saying that, “Hillary Clinton is so much better than her and Bernie is a sellout. Bernie’s just in it for himself. Bernie’s a communist.” You’re attacking the only senator who is out there going out and speaking to Americans in all areas. He’s not staying in his home state just talking to the people who’ve elected him over and over and over again. He’s not just talking to his friends. He’s out there talking to people who disagree with them. He’s trying to get them to change their mind. Not about him, but about the policies of the Republican and Democratic parties. He is being a true leader, and you’re attacking him because I’m still with her. Let it go. Hillary Clinton lost. You refuse to acknowledge the reasons for her campaign failures, so let it go.

There is no reason why anybody in this country, other than people who are literally friends with her and say, “I need to call my friend Hillary Clinton.” Nobody else should be talking about her. So this is it, okay. I am done. I am not going to mention it. I am not going to talk about her. We have acknowledged all of the faults of her campaign, all of the horrible things she did wrong there. We have talked about the fact that her investigations are concluded. They came up with nothing. It was a witch hunt by the Republicans. Everyone needs to move on. I don’t care which one of those groups you fall into. We have very serious, very real threats to our democracy that are happening today. People in the United States are at risk of losing their healthcare. They’re at risk of losing their jobs, their Medicaid, their Medicare, their unemployment benefits, their SNAP benefits, everything. I think we have better things to do than talk about Hillary Clinton.